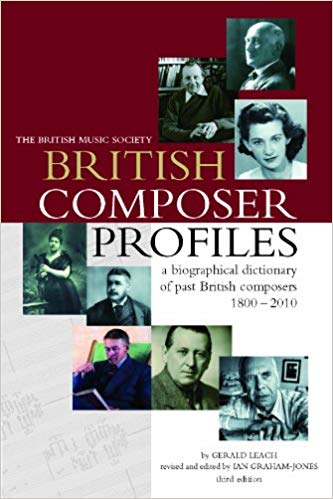 British Composer Profiles is a biographical dictionary of past British composers living between 1800 and 2010. Gerald Leach’s work on two previous editions in the 1980s was recognised as a valuable resource, and the British Music Society has now published an expanded third edition revised, enlarged and edited by Ian Graham-Jones. The Chronology and Appendices have also been enlarged as further reference, and a new Introduction by Lewis Foreman offers useful insight into the background of the state of British music during the period covered.

Seven hundred and twenty composers are represented in this substantial 250-page dictionary. Each composer-entry contains brief biographical details and a listing of appropriate main works. Many of the composers listed will not be found in standard reference works, which makes this publication a first point of reference for those seeking basic information on the many British composers, some largely forgotten, who have contributed to our musical heritage since the beginning of the nineteenth century.

Copies of BMS annual journals are available dating back to 1981. 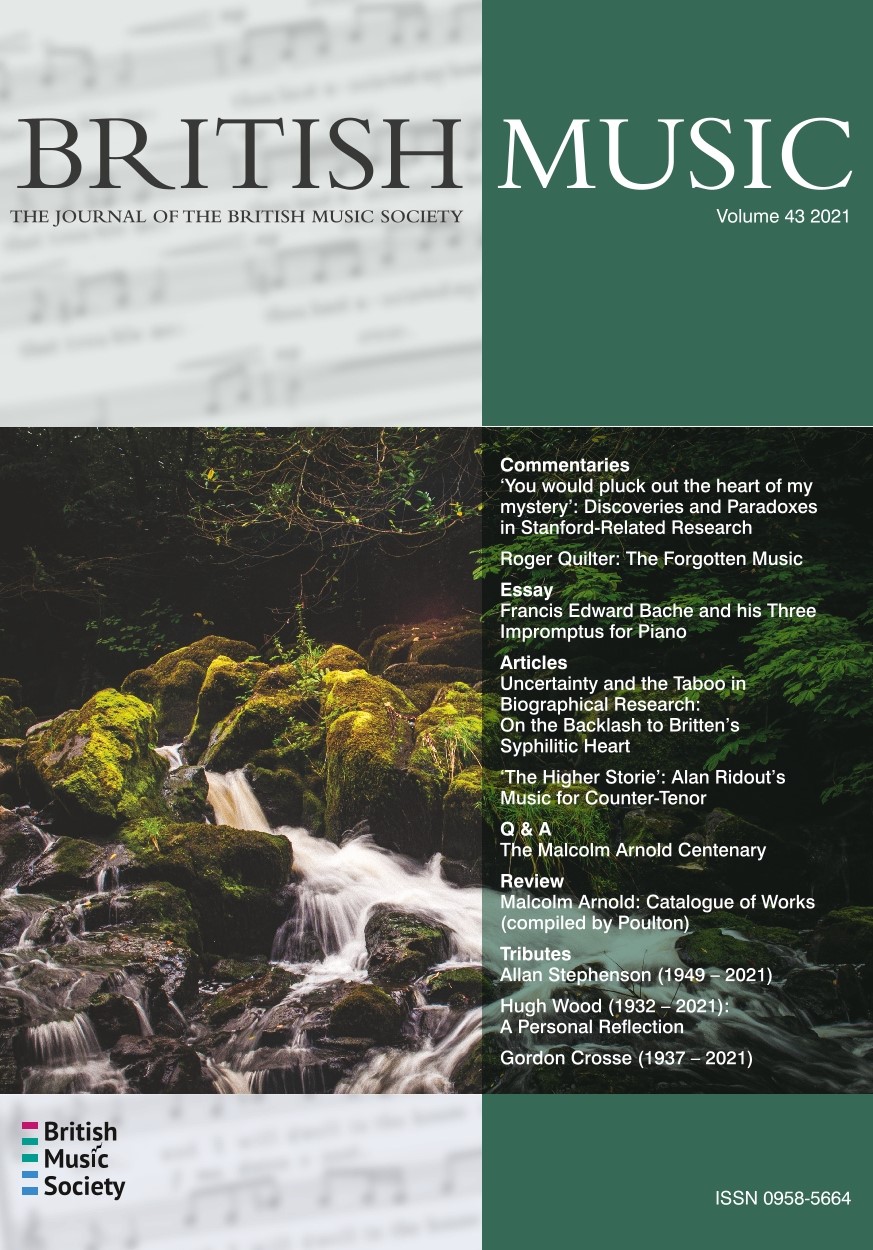 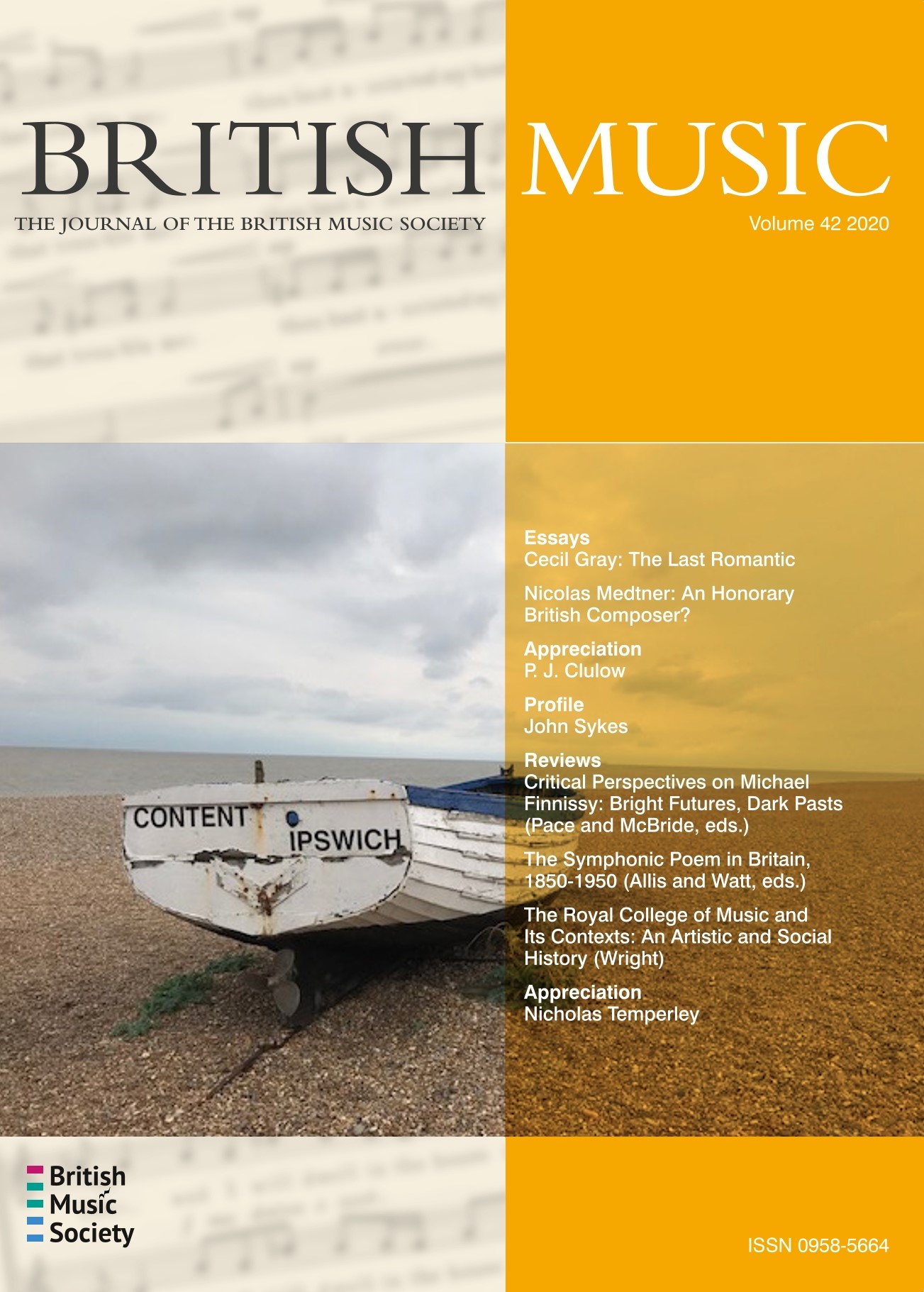 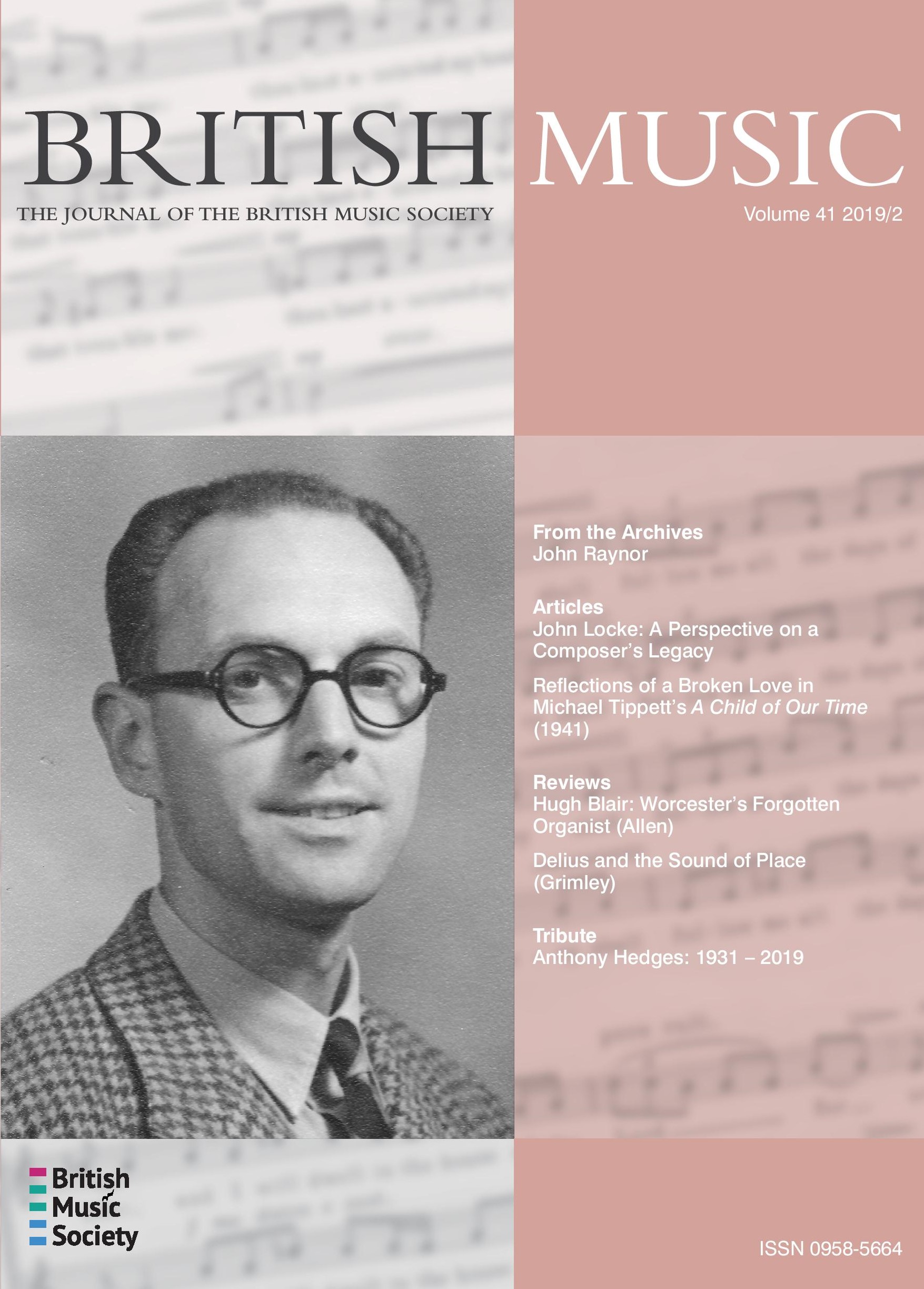 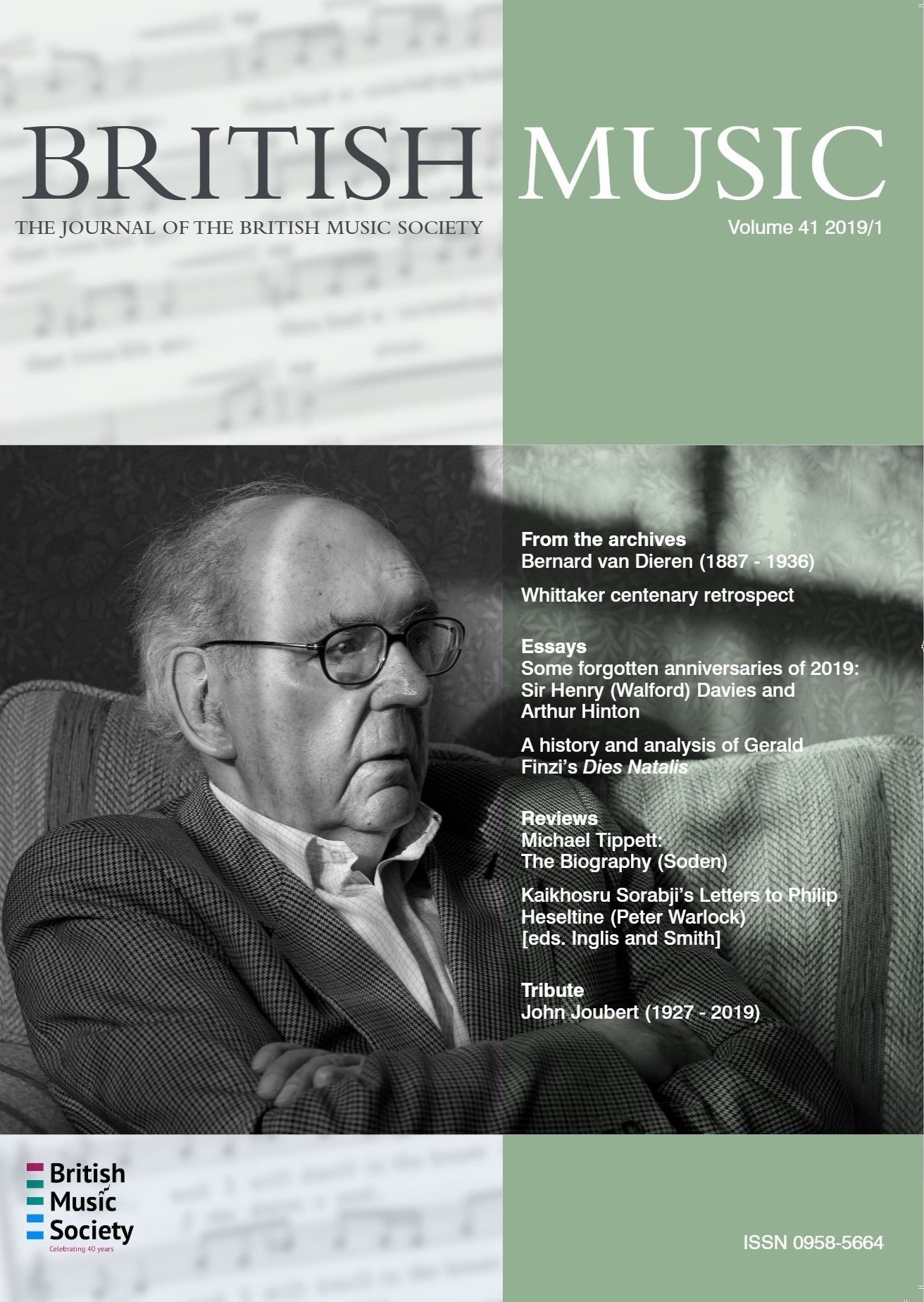 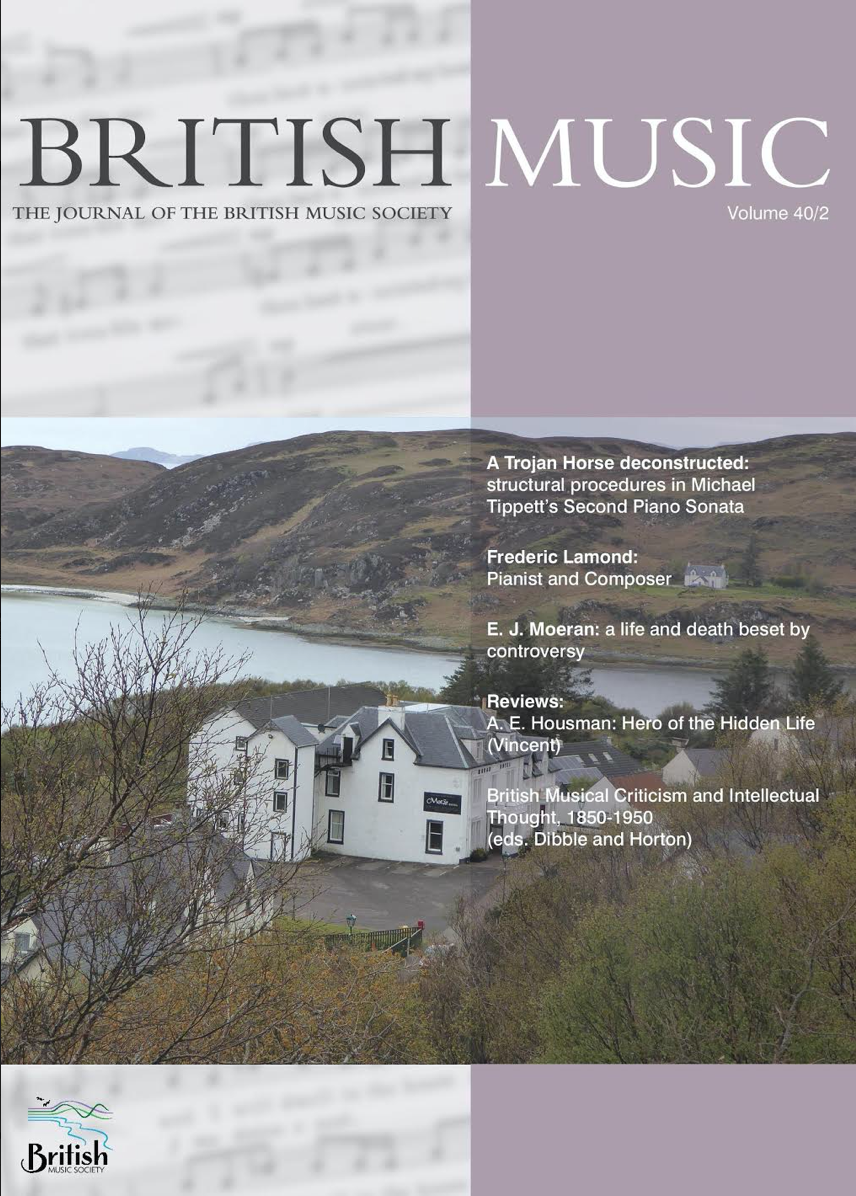 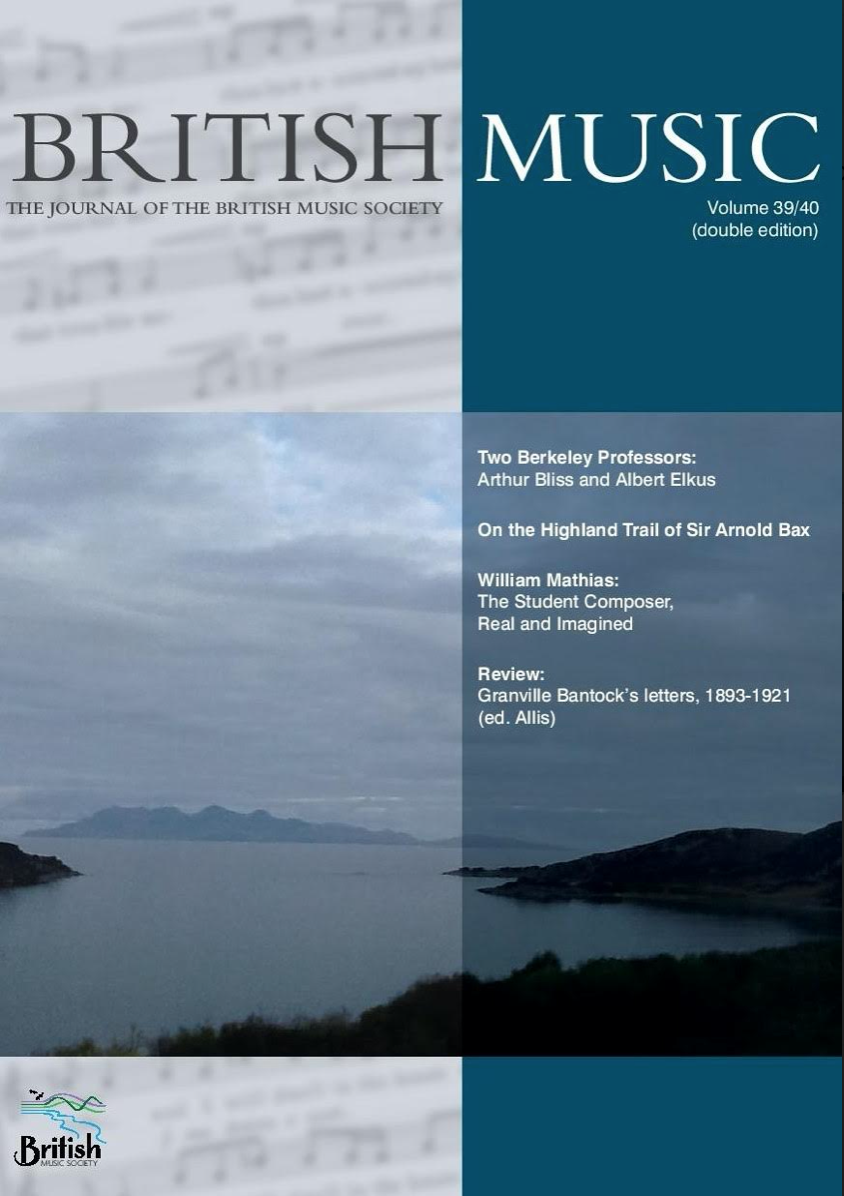 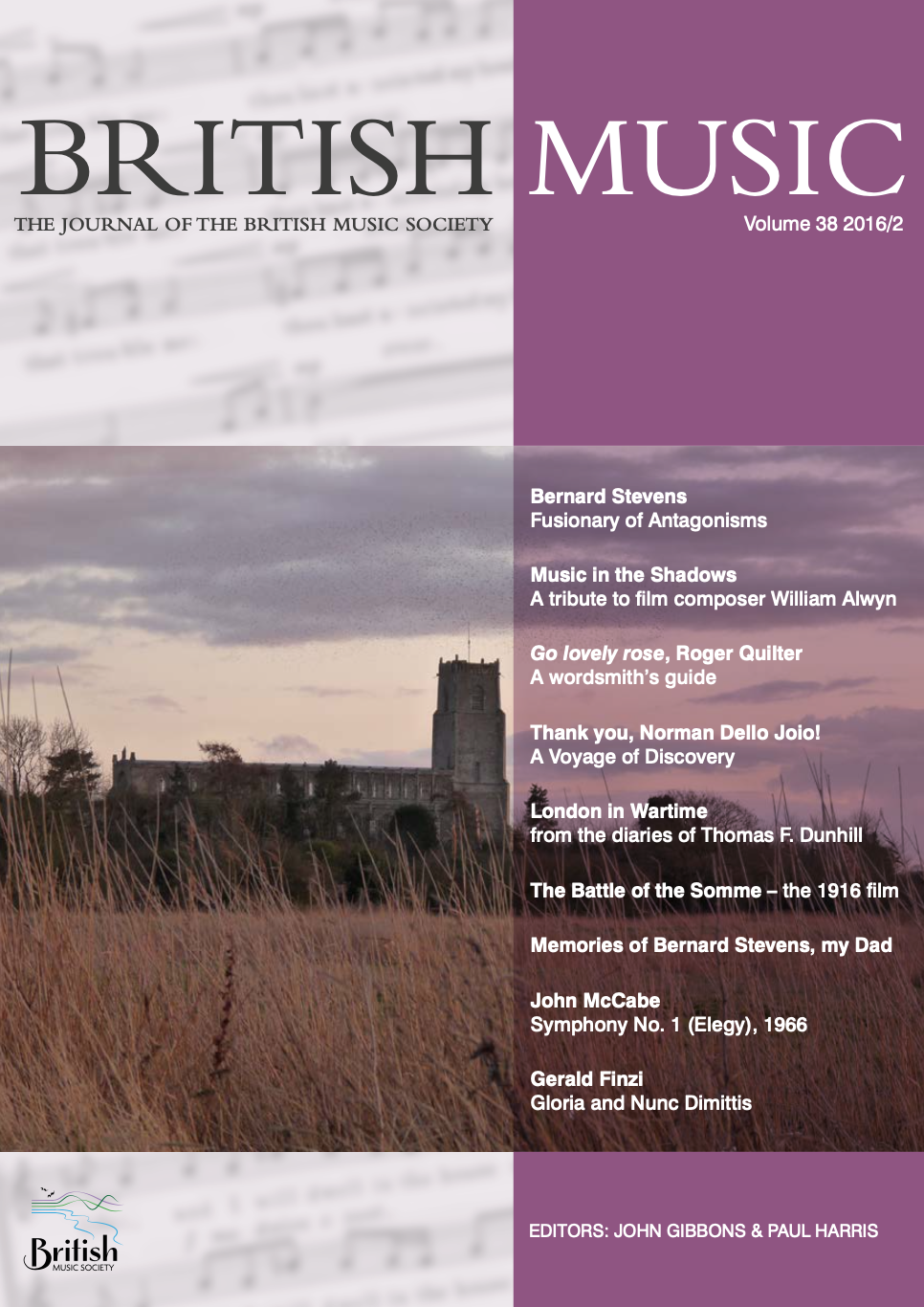 Bernard Steven: Fusionary of Antagonisms  by Christoph Schlüren
Music in the Shadows: A tribute to film composer William Alwyn by Ian Johnson
‘Go Lovely Rose’, Roger Quilter: A Wordsmith’s Guide  by Nicola Harrison
Thank you, Norman Dello Joio! – A Voyage of Discovery by John Turner
London in Wartime: From the diaries of Thomas F. Dunhill  by Paul Vincent
The Battle of the Somme: the 1916 film  by Laura Rossi
Memories of Bernard Stevens, my Dad by Catherine Stevenson
John McCabe: Symphony No. 1 (Elegy), 1966  by John France
Gerald Finzi: Gloria and Nunc Dimittis by David Bednall
Obituaries: Guy Woolfenden, Freda Berkeley 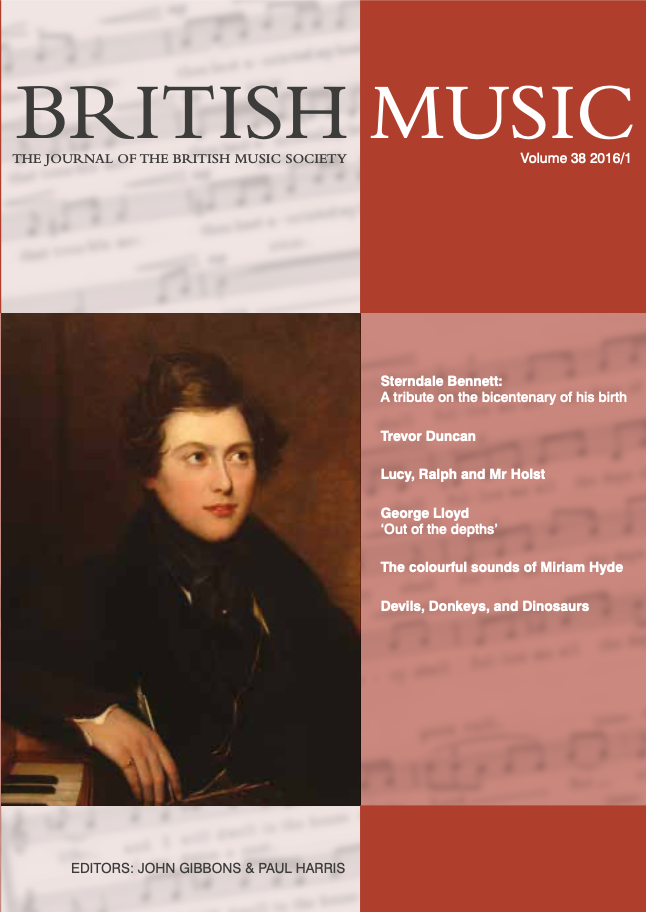 Sterndale Bennett: A tribute on the centenary of his birth by Barry Sterndale-Bennett
Trevor Duncan by Philip Scowcroft
Lucy, Ralph and Mr Holst by Alan Gibbs
George Lloyd: ‘Out of the depths’ by John Gibbons
The Colourful Sounds of Miriam Hyde by Jo-Anne Kemp
Devils, Donkeys and Dinosaurs  by Paul Harrison
Obituaries: Maxwell Davies, Roger Smalley 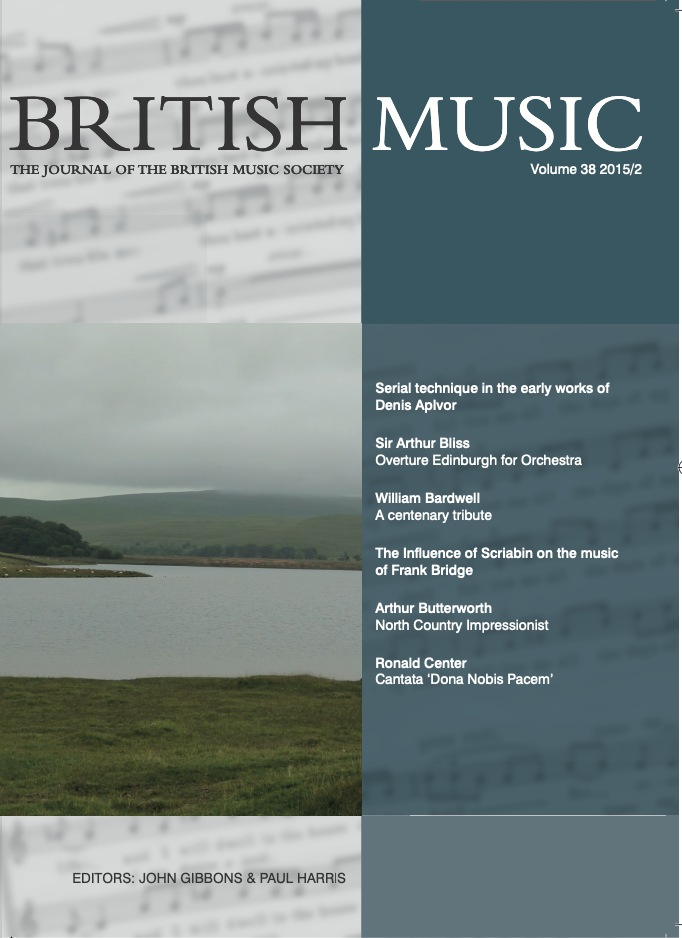 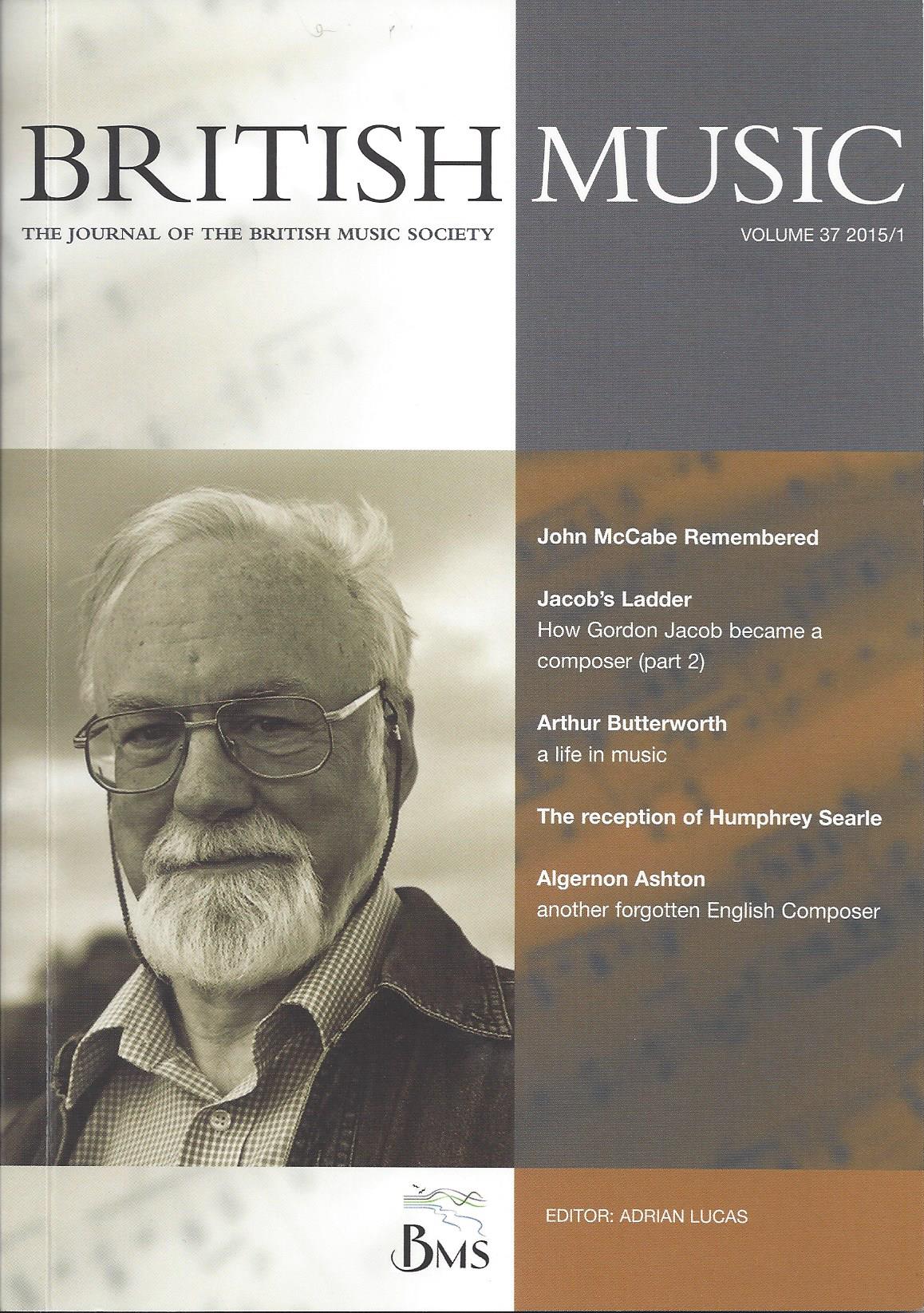 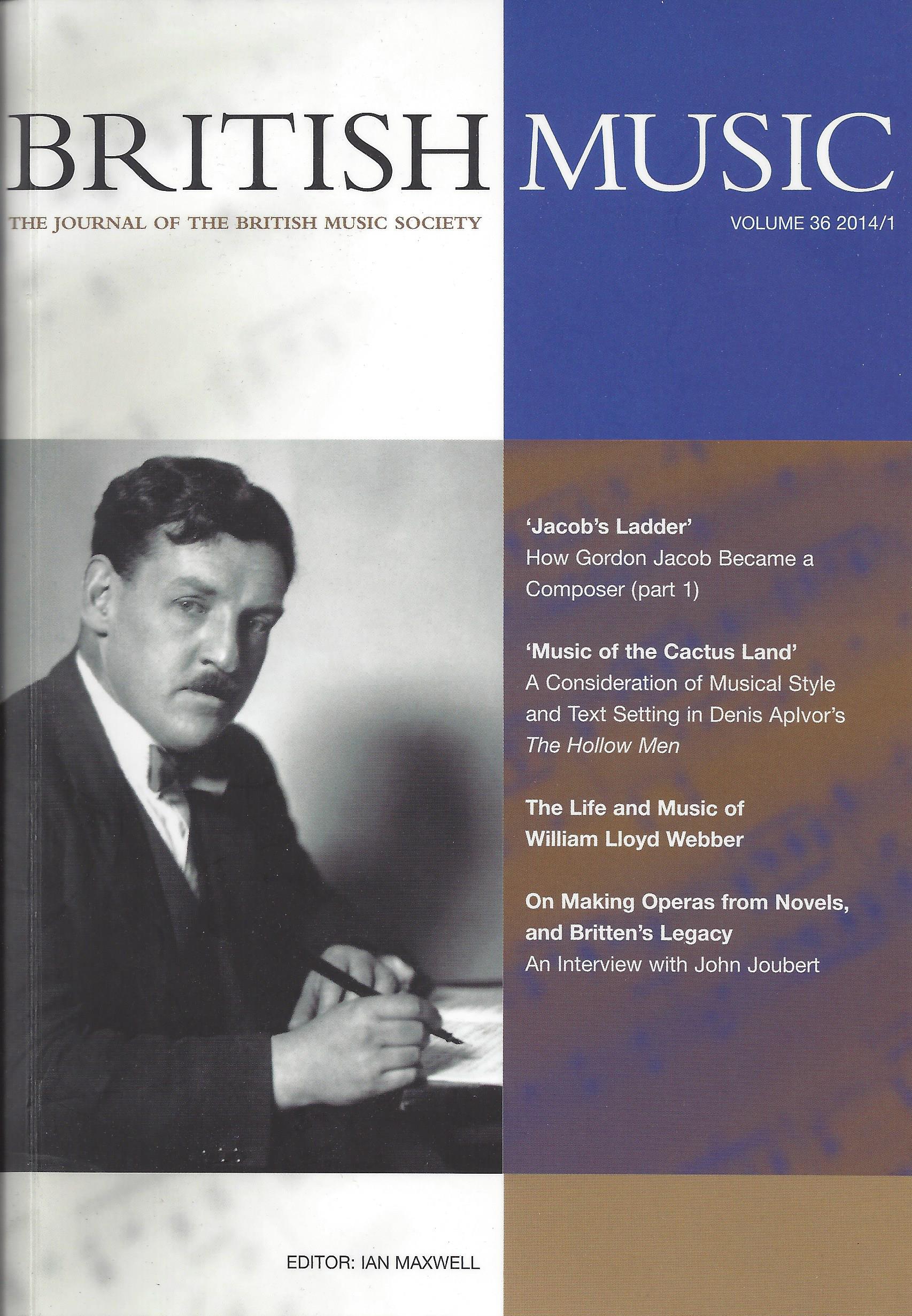 Jacob’s Ladder – How Gordon Jacob became a composer
Music of Cactus Land – A consideration of musical style and text setting in Denis ApIvor’s The Hollow Men
The Life and Music of William Lloyd Webber
On Making Operas from Novels and Britten’s Legacy – An interview with John Joubert. 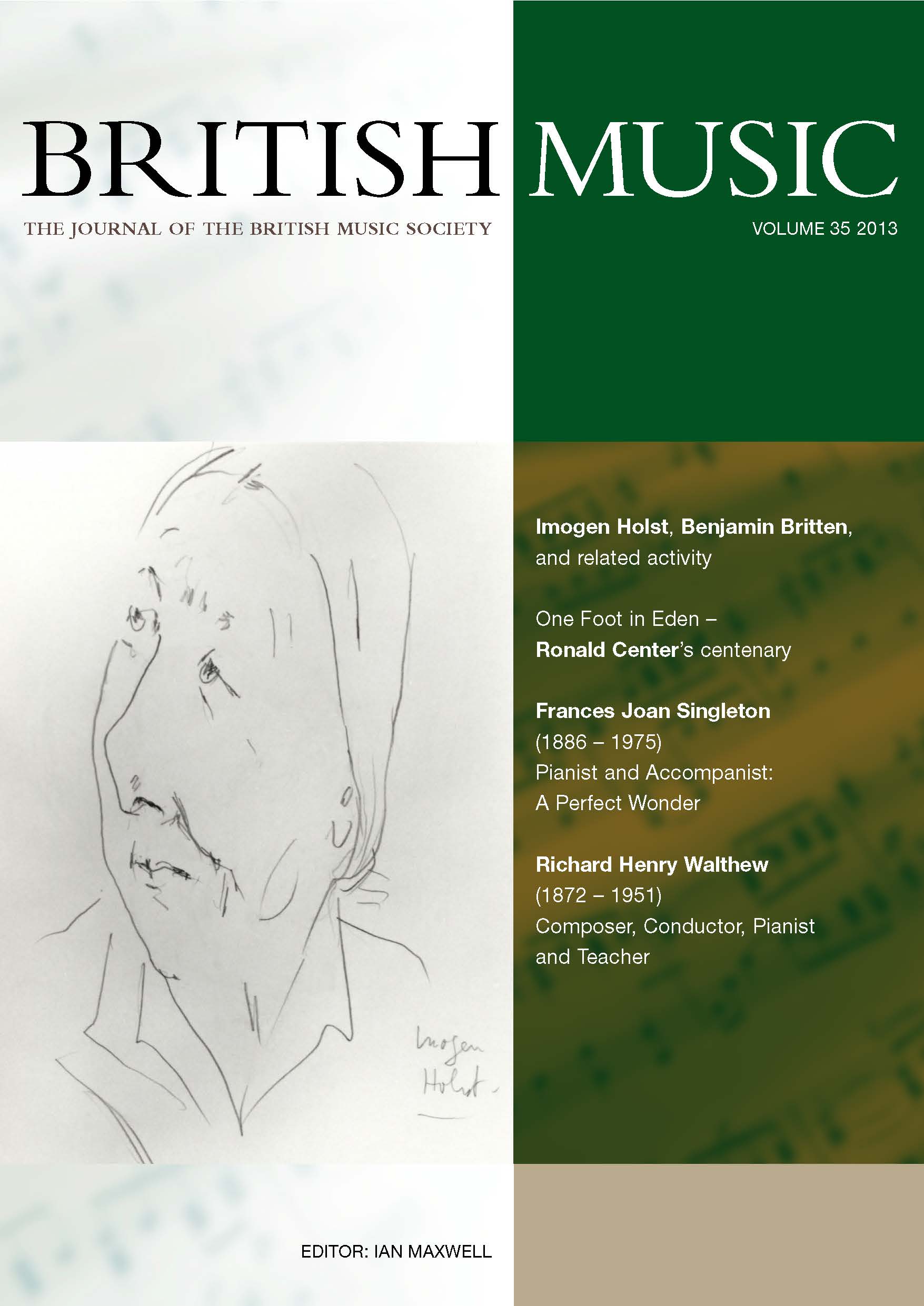 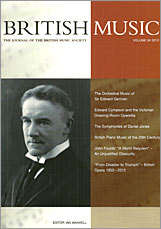 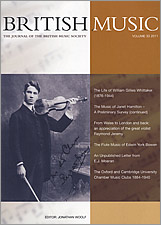 The Life of William Gillies Whittaker (1876-1944), by J. Phillip Owen; The Music of Janet Hamilton – A Preliminary Survey, by John France (continued); From Wales to London and back: an appreciation of the great violinist Raymond Jeremy, by Nigel Jarrett; The Flute Music of Edwin York Bowen, by Glen Ballard; An Unpublished Letter from E.J.Moeran, by John France; The Oxford and Cambridge University Chamber Music Clubs, by Ian Maxwell. 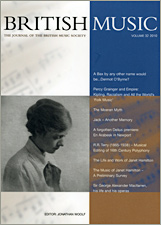 A Bax by any other name would be…Dermot O’Byrne?, by William B. Hannam; Percy Grainger and Empire: Kipling, Racialism and All the World’s ‘Folk Music’, by Bob van der Linden; The Moeran Myth, by Ian Maxwell; Jack – Another Memory, by John Talbot; A forgotten Delius première: En Arabesk in Newport, by Nigel Jarrett; R.R. Terry (1865-1938) – Musical Editing of 16th Century Polyphony, by George Sharman; The Life and Work of Janet Hamilton, by Rolf Jordan; The Music of Janet Hamilton – A Preliminary Survey, by John France; Sir George Alexander Macfarren, his life and his operas, by Russell Burdekin. 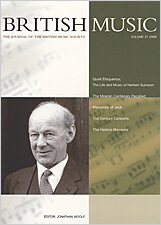 Memories of Jack, by John Talbot; The Moeran Centenary Recalled, by John Talbot; ‘Quiet Eloquence’: The Life and Music of Herbert Sumsion, by Diane M Nolan; ‘The Century Concerts’ –
A Very British Institiution, by Christopher Redwood; The Hipkins Memorial, by Alan Gibbs. 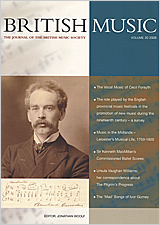 The Vocal Music of Cecil Forsyth, by David M. Bynog; The role played by the English provincial music festivals in the promotion of new music during the nineteenth century – a survey, by Pippa Drummond; Music in the Midlands – Leicester’s Musical Life, 1759-1800, by Karl Kroeger; Sir Kenneth MacMillan’s Commissioned Ballet Scores, by Paul R.W. Jackson ; Ursula Vaughan Williams; her correspondence about The Pilgrim’s Progress, by Stan Meares; The ‘Mad’ Songs of Ivor Gurney, by Richard Carder. 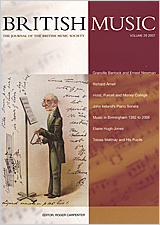 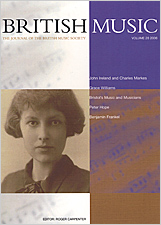 John Ireland and Charles Markes: a creative relationship, by George Dannatt; My Memories of Grace Williams (1906-1977) and her music, by Ian Parrott; Bristol’s Music and Musicians in region, nation and empire, by Stephen Banfield; Jaunting Car: the compositions of Peter Hope, by John Turner; Benjamin Frankel: his life and work, by Dimitri Kennaway.

Monographs – An occasional series of publications 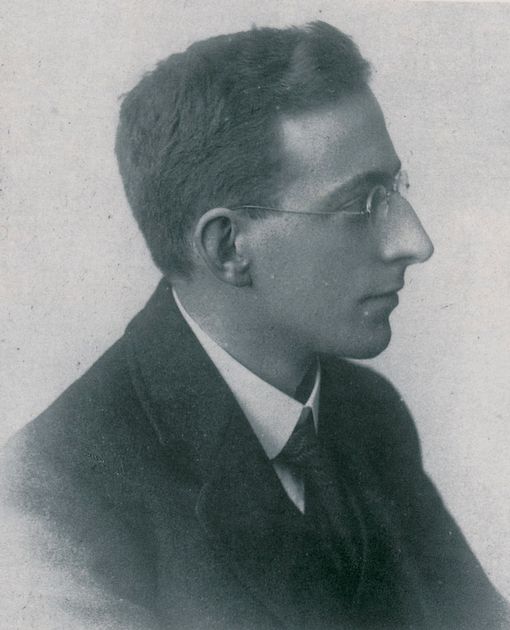 The Autobiography of Ian Parrott

As the composer, among much else, of five symphonies, five string quartets and four operas, as Gregynog professor of Music in the University College of Wales for 33 years, and as an Elgar and Warlock authority and biographer, he has been at the heart of British musical life since the 1930s.

The Life and Music of William Baines

“Mr. Carpenter’s monograph is a valuable and illuminating document about a loveable musician. On this showing, his name, like that of his mentor Eaglefield-Hull, earns a place in the list of musical Yorkshiremen, including Frederick Delius and Eric Fenby…

A publication to celebrate the 90th birthday of Arnold Cooke on 4th November 1996. The book opens with a brief biography of Cooke, followed by a chapter setting out details of his musical education and idiom.

This book is a personal reflection by the author on parallels between the poet and the composer. There are a number of photographs and line drawings in the text and also many music examples.

BENJAMIN BURROWS AND SOME OF HIS POETS

This book celebrates the centenary of the birth of Benjamin Burrows on 20th October 1891 and contains notes on a number of his song settings to words by A.E. Housman, Walter de la Mare, Shakespeare, Robert Burns and others.

A miscellany of essays on sundry aspects of British song by a variety of authors. The book was published following the British Music Society’s successful British Song Composer Year in 1991/2, which culminated in November 1992 with the biennial BMS Music Awards which in that year were for singers. The composers featured range from William Byrd to Peter Wishart, including many masters of British song.

A performing conspectus of nineteenth- and twentieth-century music for choral societies, celebrating performances given by the competing choral societies in the British Music Society Millennium Choral Competition 2000-2001. Edited by Lewis Foreman. 120 pages.

British Opera in Retrospect was a project to encourage the performance of neglected operas by British composers, and was sponsored and organized by the British Music Society for European Music Year, 1985. The book lists the operas performed as part of the project, gives details of the winners of the competition, and includes a series of articles providing a general introduction to British opera.

The vocal score of this work for soloists, chorus and orchestra, published by Swan & Co in 1922. 305 pages.