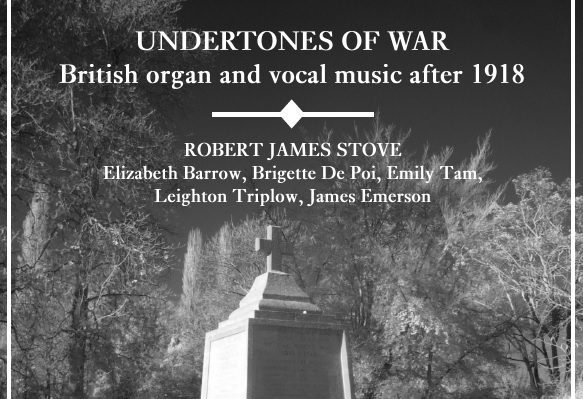 A tribute to post-1918 British sacred music is being released this month on the Australian based Ars Organi label. It pays eloquent homage to the substantial body of organ solos, carols, and anthems produced in Britain after 1918.

This is the fourth CD from organist Robert James Stove, who obtained his PhD at the Sydney Conservatorium with a thesis focused on the organ works of Stanford in 2021. Recorded at the Basilica of Our Lady of Victories, in the Melbourne suburb of Camberwell, Undertones of War (AOR004) benefits from the basilica’s wonderfully suitable Romantic organ of a kind now all too rare in Australia. The disc’s title is taken from the memoirs of a Great War combatant: poet Edmund Blunden.

Undertones of War spans several creative generations. Some of the composers represented (Sir Charles Villiers Stanford, Alan Gray, Basil Harwood) wrote copiously after Armistice Day but had grown to adulthood in the high summer of Victorian-Edwardian cultural confidence: a confidence that the trauma of four years’ grinding warfare killed off. Other composers represented (Norman Fulton, Elizabeth Poston) were still school students when the conflict ended.

For several months – not least in view of Melbourne’s exceptionally severe coronavirus-related lockdowns – the entire project threatened to become no more than a pipedream (an apt metaphor in an organ context). Nevertheless, the recording sessions for Undertones of War went ahead in January 2022. The result illuminates works which even experts in British musical history may not have come across before.

From 1 June, Undertones of War will be publicly available for download via Spotify, Deezer, Tidal, Apple, and Google Play.

As of 15 June, it will be available in hard-copy CD format too.