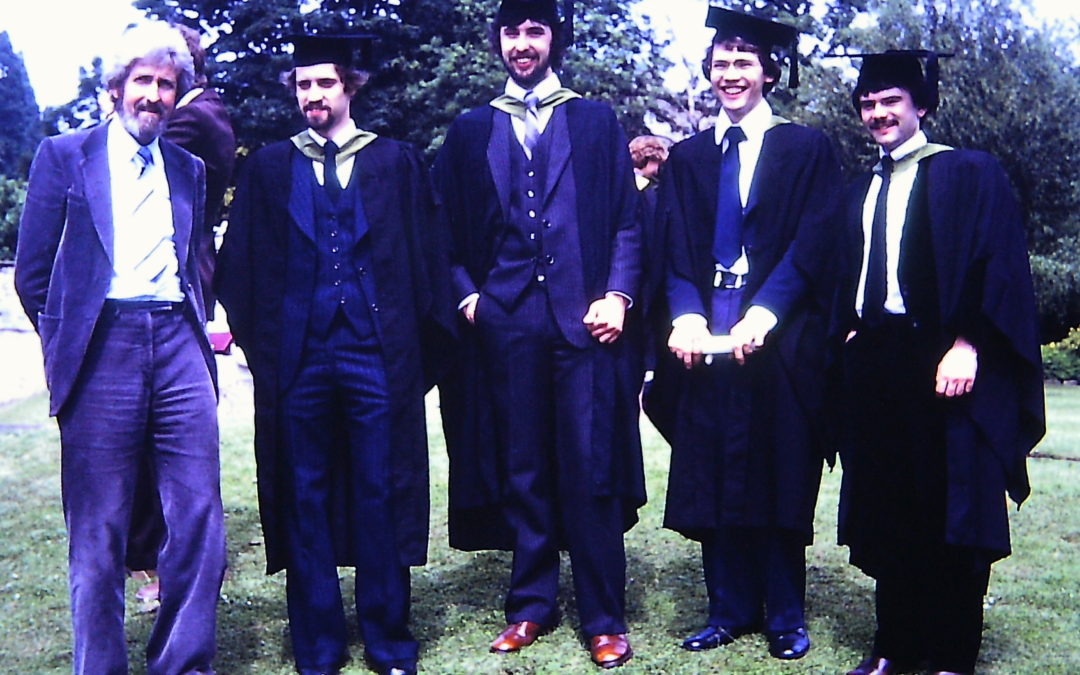 Composer, writer and lecturer, George Odam’s life in music was inspired at an early age by the music of Benjamin Britten with whom he shared a Suffolk heritage. He received personal encouragement from Britten as a young composer and later dedicated his Sonata for Tuba and Piano to the memory of Britten in which a quote from Peter Grimes is interwoven into the score.  Other early influences on his student life were Alexander Goehr, Jonathan Harvey and Hans Keller.

For over 30 years, Odam held the post of Professor of Music and Music Education at Bath Spa University from 1966, during which he developed the role of composition in music education. (He is pictured above in 1981 with students from Bath Spa University).

His book The Sounding Symbol (1995) emphasised the importance of an integrated and child-centred approach, while extolling the suitability of non-western music and the development of memory in aural traditions.

An early composition for young performers entitled Angry Arrow (1968) was based on traditional songs of North American tribes arranged for unison junior choir and flexible junior school ensemble in which children were invited to create rhythmic ostinati and lyrics.  This was followed by St. George and the Dragon (1969) using 12th century melodies,  Tutankhamun (1972), The Legend of Robin Hood scored for voices, descant recorder, pitched percussion and piano, and Inca (both 1976), as well as numerous songs that have enjoyed performances throughout the UK, Germany and Australia.

Other publications included The Musicians’ Body: a maintenance manual for peak performance (Ashgate 2007) jointly written by Odam and Dr Jaume Rosset, which was translated into Japanese, French and Spanish, and became a best-seller in the Ashgate catalogue in 2016.

During 1999-2007, Odam was Head of Research and Staff Development at the Guildhall School of Music and Drama. It was in his final year that he compiled and edited another of his Ashgate books Landscapes of the Mind: The Music of John McCabe after the Guildhall’s hosting of a McCabe Festival in 2006. Odam and McCabe had remained friends since their student days at the Royal Manchester College of Music, and this book will be an invaluable source of information, together with Odam’s wonderful interview, for the forthcoming British Music Society documentary on John McCabe.