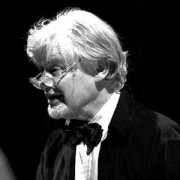 After two years in concert management, Giles Easterbrook started his career in the promotion department at Novellos where he later became head of promotion and served the Novello composers with extraordinary dedication and commitment.

This would certainly have been confirmed by major Novello composers such as John Joubert and John McCabe, who are sadly no longer with us. I benefited greatly from his support and enthusiasm for my own music.

His colleague at Novello, Fiona Southey, said: ‘He was certainly an important figure in my life, and I shall always be immensely grateful for his friendship, and all that he taught me. As you know, he was a brilliant man – a complete original.’

Giles Easterbrook was born in Berlin on 3 January 1949 where his father was involved in post-war reconstruction work. The family returned two years later; he went to Purley Grammar School; and then Worcester College, Oxford, where he had some private tuition with Kenneth Leighton, whose Trust he later helped to establish.

Easterbrook was passionate about mid-twentieth British music. He met Sir Arthur Bliss late in his life and, after his death, persuaded Lady Bliss to set up the Bliss Trust to support recordings and other projects. He was also devoted to Lambert and was responsible for promoting and editing some of his early works.

He regularly wrote CD booklet notes and was nominated for the Best CD Liner Notes Grammy Awards four times.  When he left Novellos he set up his own publishing company, Maecenas, supporting composers including Judith Bingham and Geoffrey Poole.

Along with all Easterbrook’s multifarious activities he was a composer with a small output but some international performances. In 2010 the record company Prima Facie, which he co-founded with Steve Plews 25 years ago, brought out a CD of his music entitled The Moon Underwater.

The CD booklet notes are lengthy and very characteristic. The earliest piece is 25 Variations (1979) for piano. After some detail about this forthright piece, he says: ‘Rather a lot to say about a seven-minute piece, and you’re right.’ The Moon Underwater: Symphonic Study for Brass and Percussion (1985) was commissioned for the Lock Brass Consort.

The premiere was in Munich followed by performances in Manchester and London, but the elaborate scoring for a large ensemble will make future performances a problem.

Easterbrook remembers his German trip as ‘how, unable to afford hotels, I slept, washed and shaved on overnight trains between (say) Munich and Cologne and breakfasted off sausages and beer on the station’.

This is a reminder that after Easterbrook left his own publishing company, he experienced many difficulties but never lost his energy for projects he believed in. Sad but True (1983) for oboe and violin got lost, was recomposed, then found.

The version for oboe and violin is on the recording, but it also exists for two violins, both versions approved by the composer. Out of the Purple (1983) makes a demanding but logical fifteen minutes for clarinet and piano.

All these pieces are close to a mainstream modern idiom successfully accomplished. I think Giles would like us to focus on his compositions at this juncture as they exhibit so many aspects of his personality – uncompromising, acerbic and witty, all things for which he will long be remembered. In 2013 he married Jane Armstrong who survives him.