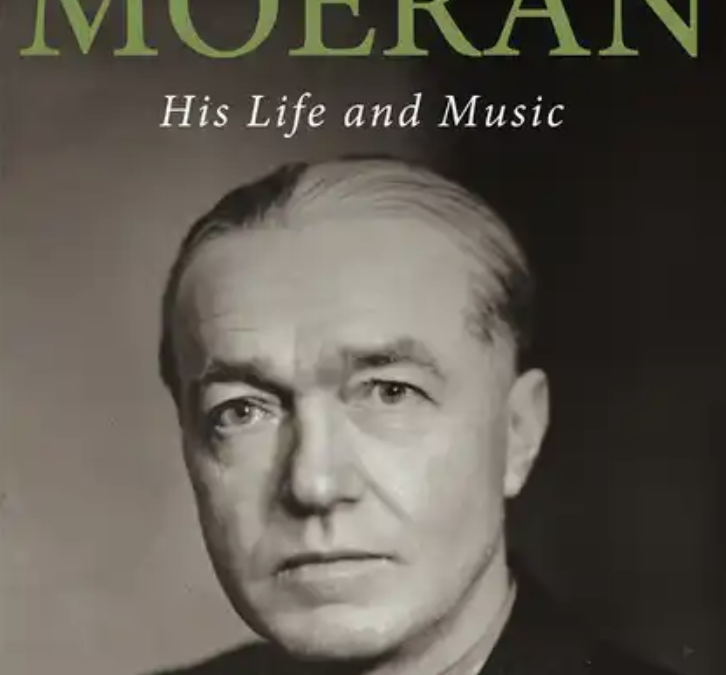 Ian Maxwell has been examining and researching the life and work of E J Moeran for over 15 years and this book is the distillation of these efforts into a magnificent book detailing his conclusions.

The scholarship is deep, persistent and penetrating, and it is presented in a thoroughly readable style.  I would go as far as to say this is one of the best books of its type I have ever come across, and up there with, say, Lewis Foreman’s Bax.

The author has been presented with a large number of problems, notably the conspicuous absence of ancillary material, for instance correspondence, since the composer was careless about keeping ephemera, and destroyed work and sketches he deemed inadequate.  Even more difficult is what the author calls the ‘Moeran mythology’ – tales which grew up around him (and not denied by him) which demands an appendix all to itself.

As Maxwell states on page 222 ‘Moeran invested time and effort during his adult life in constructing a persona, or series of personas, that were intended to correlate with how he believed others perceived him, and this construction was founded on extensive dissembling’.

The author has patiently examined all the data which can be verified and then, with scrupulous care, come to reasoned conclusions to the mysteries which are often at variance with former assumptions and stories.

For instance, Moeran was wounded in WW1 but not as a despatch rider (though he did love motor bikes). He was leading a patrol in dangerous territory when he sustained an injury to the back of his head, caused by metal fragments.  He did not have a ‘plate in his head’ (as he was wont to claim).

The fragments were carefully removed after the war. Maxwell dismisses the notion that there was undetected nerve damage, though one does wonder if the subsequent alcoholism and irrational behaviour might have been a long-suffered consequence.

The author deals sympathetically with two difficult matters.  Firstly, the baleful influence of Philip Helestine & co with whom Moeran spent several years noted for hedonistic and doubtless immoral behaviour in the late 20s at a cottage in Eynsford, Kent.  This virtually put a stop to his composing just as he was emerging as a ‘promising’ young composer.

Then there is the curious matter of the late marriage to the cellist Peers Coetmore. In the first instance Moeran was almost certainly bi-sexual.  During his peripatetic life he was looked after during stays with family or friends, and wealthy enough for long sojourns in hotels, so he was not fully house-trained.  Coetmore had a career to pursue, was frequently away, and was not a housewife.

For her, being married to a significant composer was seen as a boost to her ambitions.  Moeran’s letters to her have mostly been saved (but not vice-vera) and shows him to be soppily dependent on her, but he was frequently apologising for being drunk a lot of the time, which understandably made her somewhat cross.  One may also surmise that the drunkenness caused him to be impotent.

The other difficult issue now confirmed is that of his sad death. The last years were full of serious health problems, and he was often very depressed. But his falling into the river Kenmare was not suicide – he was dead before he hit the water, a probable cause being a cerebral haemorrhage.

Moeran’s music is dealt with at some length.  One important suggestion is that this was sometimes seen as ‘derivative’ but this is too simplistic.  For instance, he took some lessons with John Ireland in the early twenties, but this became two-way issue. Ireland’s harmonies became more complex having seen Moeran’s work, but Ireland insisted on scrupulous attention to detail, which became a feature of Moeran’s later output, and this might be seen as unexpected given other aspects of his personality.

Listening to his late Sinfonietta it occurred to me that if I had been listening with an ‘innocent ear’ I would have thought the music had been composed by Richard Rodney Bennett (in sensible, tonal mode). This of course would be impossible, the point being is that there is a difference between ‘influence’ and adventitious similarity.

So here is the whole story about a composer whose life was full of difficulties with mental confusion, health, alcohol, sexuality – you name it, but one who has given us some memorably lovely music (Just think for a moment of the slow movement of the cello concerto…..).

I have a few tiny gripes, if I may be so bold.  I would like it if the author has given an authoritative opinion on the pronunciation of Moeran’s name, which I have always assumed takes the relative stress on the first syllable, not as I have also heard, the second.

The genealogy at the beginning of the book is somewhat confusing.  A chart would be very helpful.

Heathcote Statham, who makes a couple of appearances, is described as ‘the conductor’ whereas I would suggest he is better known (at least today) as the distinguished organist (and composer) at Norwich Cathedral from 1928 to 1966.

Finally, though the incomplete second symphony is discussed, I would have welcomed the author’s opinion of Martin Yates’s completion of the work.  The result – from a Dutton Epoch CD of 2011, sounds mostly pretty good to me.

PLEASE NOTE: An important omission has been reported in the above recently-published book. A section of the Select Bibliography was inadvertently removed prior to publication. This is as follows:

The author apologises to Mr Talbot for this oversight.