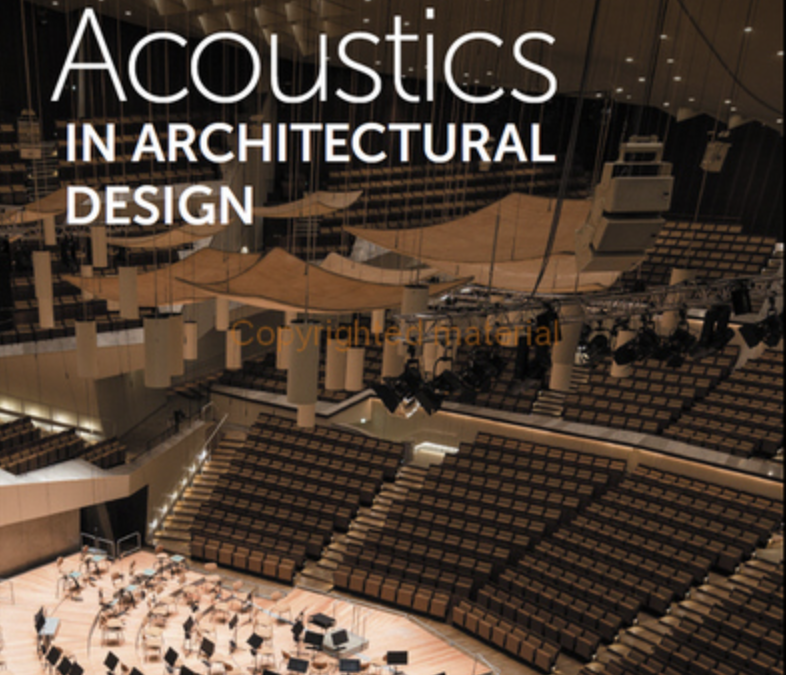 This is ‘simply’ a book about sound.  Except it is not simple at all.  For such a commonplace entity, its control and dissemination is a hugely complex matter, encompassing our experiences ranging from concert halls to railway station announcements etc.,etc.

As these matters are something of an obsession of mine, a few comments will be filtered through a personal lens.

I noticed from an early age that some musicians seem unaware of sound in itself.  They have battered old upright pianos, in the old days were not aware of the advantages of stereo reproduction (and now have cheap music centres), they were indifferent to the acoustic qualities of the concert hall they attended.

Whereas others (‘me too’) need a decent grand piano, have good quality hi-fi, and am acutely aware of the misfortune of being stuck with a concert hall with terrible acoustics (in my case, in student days, Sheffield City Hall) but thankful that the nearest one to me now is Aberdeen’s Music Hall, once described by Beecham as being ‘one of the best in the country’.

In this book, which is for the second category above, Mr Orlowski deals with very complex matters in a clear and friendly manner.  An obligatory first chapter deals with the physics of sound (‘Fundamentals of Acoustics’) which provides the framework for that which follows. I would suggest that these details are quite understandable to a knowledgeable and interested listener.

There then follow a number of chapters exploring the practical applications of the matter from the Greeks to today.  Some of the problems can be – perhaps too glibly, if cleverly – described as being based on the tensions between some architects (that most arrogant profession) who don’t listen or hear, and some musicians who do not look and see.  There are many circles to be squared, since there are a large number of issues at stake.

For instance, in the case of concerted music, it is nice to appreciate the warm acoustic of a good hall.  But also important is the need for musicians to hear one another properly. I once had to rehearse a local orchestra in a different venue where the players could not hear one another, but also the sounds coming to me on the podium arrived with different microsecond delays.  This was a nightmare for all, and my memories of, for example, Brahms’ Academic Festival Overture remain sore!

The book does not confine itself to concert halls.  Chapters include discussions of pre 20th century opera houses and concert halls, then the same with many more recent examples.  Further sections concern theatres, schools, recital halls, lecture rooms, worship spaces and pulpits, law courts, transportation buildings (British Rail!) open plan offices, museums, and even planetariums.  There are many photographs and diagrams.

It also seems that with all the recent technical analysis available that even some of the latest halls across the world are the subject of some criticism, even if they look absolutely splendid.

Paradoxically, London’s Wigmore Hall, generally regarded as ‘just perfect’, breaks many of the rules which have been empirically established.

It is a matter of record that London’s other three main halls are in varying degrees unsatisfactory and a national shame that Sir Simon Rattle has gone back to Germany, fed up with the Barbican (wrong shape!) and denied the promised new hall.  After all, ‘Sound’ is his life’s work, and he is not prepared to compromise. Good on him!