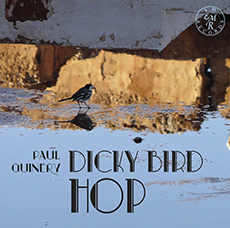 Paul Guinery is clearly a sort of ‘Renaissance Man’. His warm enthusiasm for music will be familiar to anyone who listens to Radio 3, as he is an announcer (and a news reader) for the BBC.

He is chairman of the Delius Trust and has co-written Delius and his Music with Martin Lee-Brown. He has long been associated with the English Music Festival. And – it turns out – he is an expert pianist.

This disc is a collection of 22 tracks of the sort of easy-listening music much in vogue in the first half of the last century. If, as I remember was when young, you lived in a house where the Light Programme was on a lot you will find well-remembered items from Jack Strachey’s In Party Mood – the signature tune of Housewives Choice, to dimly remembered ones such as Vivian Ellis’s Alpine Pastures of My Word.

Then there are some with which is pleasant to be newly acquainted like the three movements from Madeleine Dring’s Colour Suite. The strange title of the disc is a humorous novelty by Raymond Gourlay, whose music I suspect is now largely forgotten.

As a young pianist I was very familiar with the sort of light music publications produced in the era. I recall being very disappointed that the printed editions were very simple, threadbare almost, and quite unlike the renditions heard on the radio. Mr Guinery modestly does not mention that it is obvious that he has sexed up these basic forms into concert-level items, and very engagingly too.

There are very full notes on the composers and the music in a 32-page booklet. Mr Guinery makes the point that the skill involved in producing these minor masterpieces is not to be underestimated in the same way that a well-plotted thriller may involve techniques more associated with ‘literature’.

The most impressive items included are a pair of concerto-like creations which tended to be paired together on 78s (remember them?) – Hubert Bath’s Cornish Rhapsody and Richard Addinsell’s Warsaw Concerto, both of these pieces being music written for Romantic WW2 escapist film fantasies.

I always thought the Addinsell superior to the Bath, good though that is. It is an ‘outrageous’ pastiche of Rachmaninoff to be sure, but the tunes are lovely all the same. Mr Guinery has here arranged the full score of the whole work for solo piano and it brings this fascinating disc to a barn-storming conclusion.

The final point to be mentioned is that the piano is superbly recorded in a very natural sound.