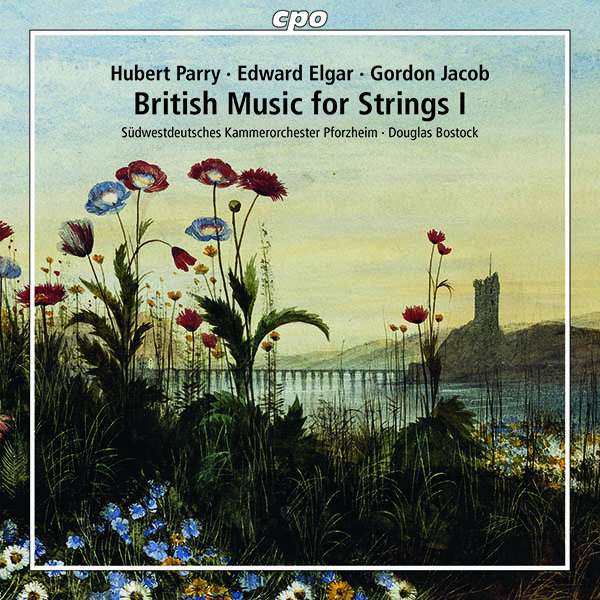 This lacklustre trio of prosaic string pieces don’t happily co-exist together, especially under the grandiosely overblown title of this release.  An odd mix of works by those well-regarded British composers, Elgar, Parry and Jacob, certainly make uneasy bedfellows in what appears to be a commercially inspired venture.

The best-known name in this tarnished, lopsided crown is Edward Elgar. One of the treasured composer’s early works, (and rarely played) The Organ Sonata (1895) is here awkwardly transcribed  by German composer, Hans Kunstovny, into a suspect version for string orchestra. The deep tonal organ power and low-key charms of the original score lose impact among comparatively light-weight strings.

Whilst this cumbersome volte-face is certainly no convincing chameleon, it does give very slight early insights into that matchless Elgarian thematic technique finely developed in subsequent mature works that were destined to take British and World music lovers by storm.

Tell-tale phrases in a slow movement ambitiously marked, Andante espressivo, does show some flashes of that familiar Elgarian melodic sound.

What a pity the superb acoustic engineering of this release is squandered on a painful dose of bastardised Elgar, accompanied by two mundane works alongside it. Parry’s totally  forgettable, English Suite (1920) and Jacob’s meandering, A Symphony for Strings (1943) are added in what could only be termed as  superficial support.

Violins, violas, cellos, and double basses all make up a team of faultless instrumentalists.  Well-disciplined players (among whom, surprise, surprise, Mr Kunstovny was once a bass player!) respond with a commitment whipped up by that well-travelled international conductor, Douglas Bostock.

Players and their accomplished director get little from these lukewarm rambling scores which fall short of any innovative ideas. In contrast, other compositions like the symphonies of Parry and Jacob are outstanding in the field of British musical literature.