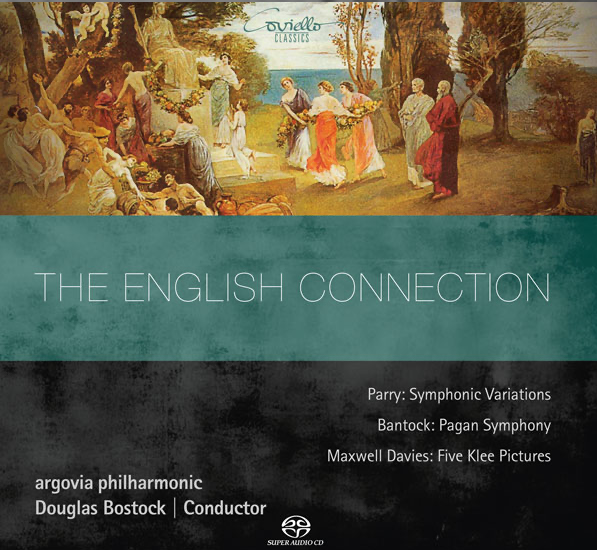 This beautifully produced SACD unites three disparate English works which are seldom heard in concert, and certainly not on the same programme.

Parry’s Symphonic Variations from 1897 is a well-constructed work very much in the mould of Brahms and Dvorak. I can see no reason why these variations should not be played more often as they are ingratiating, elegant and beautifully proportioned. They never outstay their welcome and at just under 15 minutes would easily fit in a standard concert.

Bantock’s Pagan Symphony completed thirty years later is clearly in the 20th century, but only just. Some modal writing gives the work a folksy British feel while some of the harmonies are decidedly impressionistic. Overall, it sounds like a tone poem rather than a symphony, or perhaps a film score in search of a film. That said, it is a colourful work, full of interesting touches of orchestration; the end of the Satyrs Dance is a thrilling percussion cadenza well ahead of its time.  There is a well-shot video on YouTube of these forces performing it.

Peter Maxwell Davies Five Klee Pictures of 1959 (rev.76) was written when he was teaching music at Cirencester Grammar school and written for the school orchestra. It must have sounded quite different with a school orchestra rather than the professional group here. I speculate that some of the ravishing woodwind solos must have sounded more squawky, and in the ‘Twittering Machine’ the orchestra must have been stretched to breaking point.  In any case it is one of Davies’ more approachable works and these idiomatic orchestral miniatures are well worth visiting.

Douglas Bostock, who has done so much for British music abroad, draws some wonderful playing from the Argovia Philharmonic. The recording and SACD production are exemplary.