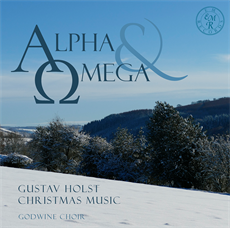 Alpha and Omega indeed – this mostly hugely welcome issue includes some of Holst’s earliest works and his last one.  I say ‘mostly’ because the early works are four organ pieces dating from 1890/1 which are no better than most late Victorian stuff, albeit not significantly worse.

The last piece is a bizarre organ arrangement for four hands and presumably a varying number of feet, of the scherzo from a projected 2nd symphony. At the première of the orchestral version Adrian Boult said it was ‘fiendishly difficult to play, and…. difficult to listen to’.

The organists here – Richard Brasier and Tom Bell clearly enjoy themselves. Dunno about any listeners. The point is that none of these tracks are the least bit typical of the composer. His famously clear-sighted daughter and biographer, Imogen, may have had her doubts about this music.

Having got the above out of the way I can truthfully assert that the rest of the disc, its major part, is unalloyed joy. It includes all 17 of Holst’s carols two of which are recorded for the first time.  The notes point to the sad fact these rarely, if ever, feature in the repertoire of Kings College, Cambridge.

This may be for what, I suggest, could be a curious reason. The music in Holst’s scores looks less interesting than it turns out to be – especially when so finely sung by the Godwine Choir. It is deceptively simple, a little austere perhaps and tonally pure, often folk-song derived though usually original. These arrangements are not the somewhat over-cooked variety that seem to be the vogue today.

Take for example A Dream of Christmas, astonishingly here receiving its first recording. It is almost artlessly simple, but pure Holst, an object lesson in the treatment of a repeated dominant seventh chord, which turns out not to be such, and morphs seamlessly into an unexpected key. These harmonies support a yearning melody of great expressiveness.  (You can view Holst’s own – very untidy! – manuscript if you Google IMSLP.)

What Holst was so good at was in composing music which was not specially demanding (though it is often trickier than it looks) but which does not compromise his essential characteristic musical personality.  He is content to just let unison tunes like Personent Hodie, just be themselves. Less is more. Yet this is the very same man who has given us the magnificent This have I done for my true love.