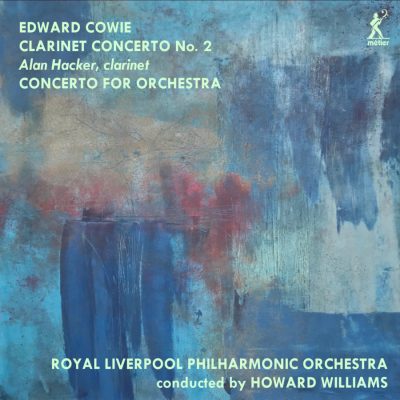 Edward Cowie, born in 1943, is a composer, painter, writer, and naturalist.  Many of his works are inspired by man and his relation to the natural world.

Here it is the constant changing ‘moods’ of water which links the two works on this disc. As a student of Goehr, Lutoslawski and Tippett, his work is colourfully orchestrated, elaborate and complex; this is not light listening.

The two works here stretch tonality to its limits, but are still approachable, with memorable splashes of melodic material.

The second Clarinet Concerto was inspired by the Victorian scholar John Ruskin who, to alleviate his bouts of depression, bought a large house overlooking Coniston Water in the Lake District.

On good clear days, he felt happy, peaceful and uplifted, but when the mists, wind and rain descended, his life became a nightmare. Ruskin is here the solo clarinet who is pitted against and within the forces of nature.  There is tremendous violence but also exquisitely orchestrated moments of calm.

The late Alan Hacker, for whom the work was written in 1979 is extraordinary, his beauty of tone never falters no matter what extreme register he is in.

The Concerto for Orchestra ‘Studies in the Movement of Water’ is named after the many highly dramatic drawings of water made by Leonardo da Vinci. In the early 80s Cowie made a BBC 2 TV film about Leonardo in which this work features.

Like Leonardo’s drawings this work is full of extremes of mirror-calmness and overpowering rages of nature. The work is brilliantly orchestrated with unusual combinations of instruments suddenly appearing out of huge outbursts.

One gets the impression that everyone here is a soloist awaiting their moment at every turn. It is fortunate that the RLPO under Mr Williams are more than a match for the challenges thrown at them.