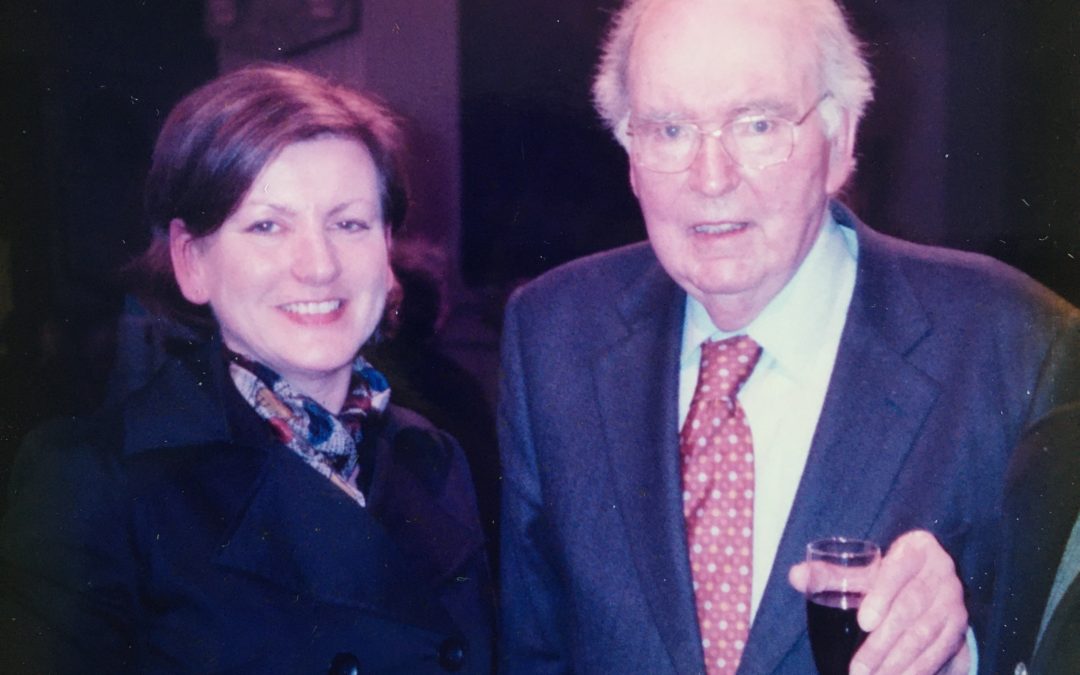 My father John Joubert died in January 2019.  He was 91 and had lived a very full and productive life as a composer, much loved university teacher, husband and family man. Just before he died I had written in my diary ‘tidy Dad’s study’ as it was badly in need of sorting out. Dad did however manage to maintain a clear space on his desk for ‘work in progress’. At his death this was the beginning of a song cycle for baritone and piano reflecting on his life and long happy marriage to Mary, my mother.

He had chosen five poems from The Oxford Book of Marriage, an anthology I had given to my parents as a Ruby Wedding present. The opening song was to be a setting of Edwin Muir’s The Confirmation. Dad’s handwriting was quite shaky by this time. It took great skill and dedication to transcribe and edit. This was done by my friend Ivor McGregor, violinist, proofreader and sometime composition pupil of Dad’s. I am delighted to say that the song has now been published by Novello with the title The Right Human Face, as chosen by Dad. Its first performance will be given by Marcus Farnsworth, baritone and Eric McElroy, piano at the 2022 Elgar Festival.

After Dad died, I knew that his manuscripts and memorabilia would need sorting and cataloguing. I had worked closely with him in the last ten years or so of his life helping with emails, postage, photocopying, transport and more. I felt very responsible. Gradually, with Ivor’s help and with encouragement from family, I made  steady progress. There were many fascinating discoveries along the way: letters Dad wrote home when he was a student at the Royal Academy of Music, photos, programmes, recordings and of course all the beautiful hand written manuscripts. Amongst these was an early unpublished work ‘Evocations’ for piano. Duncan Honeybourne has since performed and recorded this important find. The manuscripts are now at the British Library, thanks to arrangements made with Sandra Tuppen before Dad’s death and more recently with the help of Chris Scobie, Curator of Music Manuscripts.

Among the printed scores I came across Five Songs for Tenor and Piano, settings of 17th century love songs. These are very early works. I discovered a letter from the legendary tenor Wilfred Brown who had given the first performance with my mum at the piano at The Institute for Contemporary Arts in London in 1953. Dad had been unable to attend as he couldn’t afford the fare from Hull where he was on the staff at the University. He had written to Mr Brown who replied with a lovely appreciative letter about the songs and with this comment, “…you are the first composer who has written personally to express his appreciation of my learning and presenting his music, and that is why I am so happy to have heard from you.” It was so typical of Dad to take the time to write and thank performers.

These five songs had originally been published separately. I suggested to Sam Wilcock at Novello that they be reissued in a single volume as originally intended. I am very pleased to say that they are now in a smart new cover and available to purchase. I hope that they will re-enter the tenor repertoire following on from performances and broadcasts by Gerald English and Alexander Young in years past.

It is satisfying to have helped to bring two compositions written nearly seventy years apart to publication. Dad left a large body of vocal, orchestral, operatic and chamber music written across a long life. My hope and prayer is that his music will continue to find new audiences and performers as we head towards his centenary in 2027.