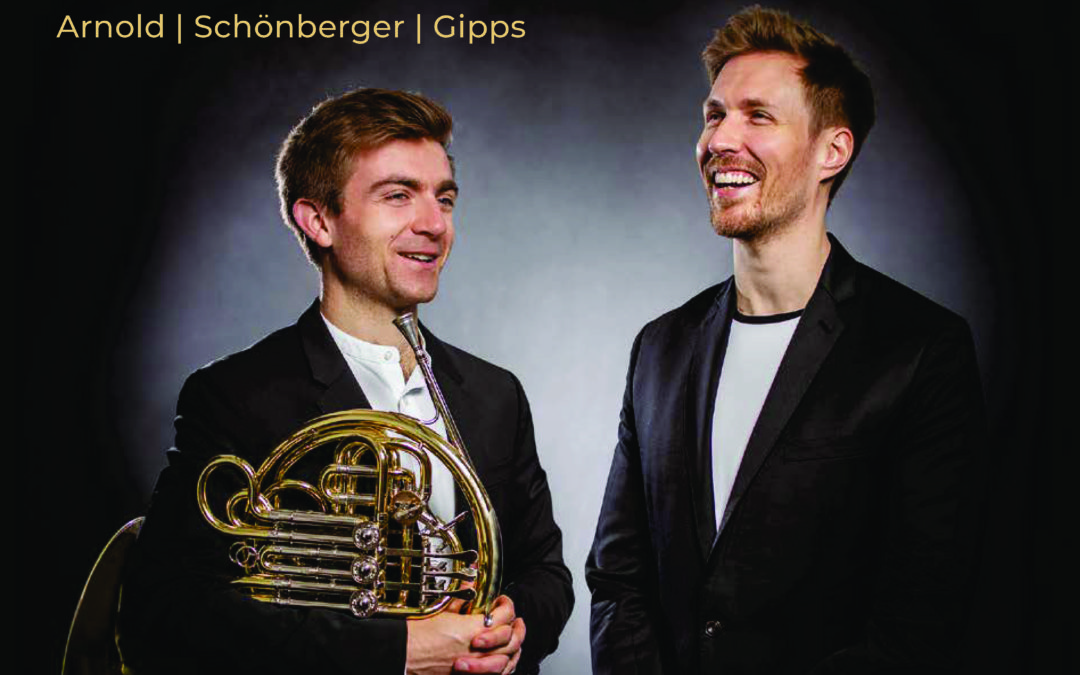 This new disc by the prodigiously gifted Ben Goldscheider includes two of the great concertos for French Horn.  Arnold’s 2nd was completed in December 1956 for his close friend Dennis Brain, who had barely premièred it before he was killed in a car crash in September 1957. Like most of Arnold concertos it is a short, compact work written to show off not only the instrument but the soloist for whom it was written.

The two outer movements are fast and brilliant, but as is so often the case in Arnold’s music the slow central movement is the work’s key. Perfectly situated in the instrument’s most lyrical register the glorious melody, reminiscent of a summer’s day, once heard is not forgotten. Dark clouds appear in the disturbing central episode, a characteristic of Arnold’s mental state. The original ending of the concerto saw the horn lead with a legato run up to top C and an ornate descending arpeggio ending on middle C.

The published version, which must have been agreed between Arnold and Brain, sees the concerto end with the legato run up to top C which Mr Goldscheider here plays staccato, only David Pyatt plays it this way and I am not sure why.

A perfect piece of programming would have seen the Horn Concerto by Gordon Jacob included on the disc, teacher and two students.  But we get the concerto by Christoph Schonberger, a German composer now living in Surrey.  It was written in 2019 but could have been written in 1819, the ‘traditional style’ mentioned in the programme notes is indeed very traditional.  It seems well written for the horn but its inclusion here is perplexing.

Ruth Gipps, Arnold’s exact contemporary at the Royal College of Music, wrote her glorious concerto in 1968 for her son, Lance Baker. The emphasis is on the lyrical over the brilliant, yet it is an enormously challenging work requiring a four-octave range and tremendous stamina. The orchestration throughout is brilliant and imaginative, and from the opening magical chords we know this will not be the run of the mill horn concerto.

Mr. Goldscheider perfectly negotiates the huge leaps in the first movement, and his ‘horn of elf land’ perfectly captures the magical quality of this opening.  There is no respite in the second movement which is a sparkling scherzo with a Bax-like trio.  The finale is difficult to bring off, switching as it does between rapid hunt like moments and slow pastoral elegies, but the players manage the transitions beautifully.

Mr. Goldscheider has something of the Alan Civil about his tone, rich and warm for the lyrical sections, but with a marvellously clear articulation in rapid passages. Mr. Reynolds draws some wonderfully rich, yet clear playing from the Philharmonia Orchestra in repertoire which can hardly be familiar to either of them.  I am not sure who Willowhayne Records are, but they have done an excellent job in both recording and production of this very welcome disc.