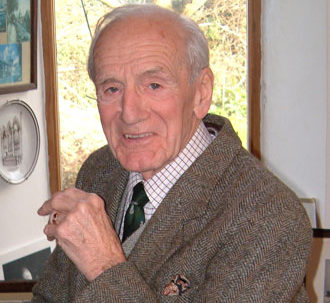 The composer, conductor, Organist and Master of the Choristers at York Minster for thirty-six years, and infinitely benign mentor and friend to generations of choristers and fellow organists, died on 10th January, 2022, at the age of 104. To those of us who knew him well his passing is a personal and cultural loss that will continue to reverberate long into the future.

Francis Jackson was born on 2nd October, 1917 in Malton, Yorkshire. His parents had a church background, and family ties led to him being introduced as an eleven-year-old to Sir Edward Bairstow, organist at York Minster, and to his playing the piano for him. On the strength of the impression he gained, Bairstow admitted him to the cathedral choir, and a decade-long relationship of protege and master ensued. The measure of his early genius as an organist is conveyed in a remark made by Bairstow to an admirer who had praised the composer’s playing of his recent Sonata for Organ (1937). No doubt Sir Edward thanked the admirer, then added, “ but you ought to hear Frankie Jackson play it”. Many years later this assessment of his virtuosity was confirmed by Marcel Dupre – magisterial organist of Saint-Sulpice in Paris – who FJ knew personally, and who declared that his Deux Esquisses for organ could only be played by two people: himself and Francis Jackson.

FJ’s autobiography of 2013, Music For A Long While, tells us that he lived something of an unpressured idyll in the years leading up to The Second World War. For a man of his sensibility and prowess, being called up to fight must have placed particular burdens upon him, and the autobiography relates in mild language the challenges and privations of being a soldier. He did however pursue musical performance in an official capacity, entertaining his fellow troops at the piano in 1944 in what was billed as, “Jive with Jackson – everything from Delius to the Duke”. He played the Cavaille-Coll organ in Tunis Cathedral days after the city’s liberation, and there was at one stage an astonishing outpouring of songs, written by him in the unpropitious circumstances of the Western Desert.

Francis Jackson was appointed organist of York Minster, in succession to Bairstow, in 1946, on his 29th birthday. His organ-playing – particularly his accompaniment of the psalms – gave a unique thrill to the spirit, and one knew that his interpretations were informed by his own compositional insight. His improvisations – on occasion giving glimpses of Ravel and Vaughan Williams – were masterly, and revealed the controlled passion that was at the centre of his artistic activity.

Though he enjoyed the support of the Dean at the Minster who had appointed him, the clergyman who was headmaster of the cathedral school for sixteen years – a possessive and perverted man who placed obstacles in the way of the choir’s functioning, and who could on occasion be no less than vicious – caused him continuous trouble, and it saddened me to hear his verdict on this period when he told me, later in life: “it spoilt my job”.

His renown – and the many forms of  honour he received during his time at York Minster – is well rehearsed and documented. In later life, though he had graciously received them at the time of giving, such gestures were tartly dismissed as “nonsense”. This did not suggest that he was above such things, rather that they were a long way to one side of him, on the periphery of life.

What he could not so readily put to one side was the manner in which he was obliged to leave his post in 1982. The then Dean had decided that the general retirement age of sixty-five should apply to all employees of the Minster. This decree was a gesture typical of blinkered and unimaginative modernism, of the times and of the individual in particular. That FJ had to succumb to such circumstances grieved him, and his last day in office was marred by distinct emotional distress.

In retirement he moved to the village of Acklam, to amalgamated cottages he had acquired in 1954 (sold to him by a farmer who had demanded, “an ’undred and fotty pound” for them), and continued his life as recitalist and composer. It was the first time that he had been able to concentrate on composing in an unpressured way (I remember seeing his score of a commissioned organ work of his, from his Minster days, on which he had written, recalling the circumstances of the first performance: “finished at 7.55pm for the 8pm recital”). On the other hand he could write works with great rapidity – the Benedicite was composed in one sitting of three hours – but this belied the thoroughness of thought and preparation that preceded such apparent outpouring.

He continued to give public organ recitals up to the age of ninety-five. He unconsciously testified to his own genius as a player when admitting that, at the age he had reached, what he had always done “with perfect ease”, was now beginning to cause anxiety.

It was at this time that his wife, Priscilla, died. She and FJ had known one another through amateur dramatics at Malton in the mid-1930s. They married in 1950, and had three children: Alice, William, and Edward. It would be difficult to encounter a more selfless person than she, and those who have appreciated the life and work of Francis Jackson owe her an incalculable debt of gratitude.

As a widower FJ continued his activities seemingly unabated: gardening, attending East Acklam church, publishing his autobiography, and commenting – sometimes with biting criticism – on contemporary music and elements of contemporary performance practice. He did not relapse into reminiscence, unless prompted, and always appeared interested in your own activity. I last saw him in the summer of 2021. We spent the day together at Acklam, at the end of which he was as alert and tireless as I had always known him, the limitations of age notwithstanding. He seemed to require no consolation for approaching mortality, and the courage he had shown throughout his life continued with him to the end.

He was the man who had written a letter of appreciation to Ravel in 1937 (though news of the composer’s death prevented him from sending it). He was the man who Vaughan Williams had poured a cup of tea for at The White Gates, Dorking, a few months before he set out for war. He was the man who, temporarily commissioned as Captain Jackson, danced with Marlene Dietrich in the Officers’ Mess in 1944. (“Tank you. Dat vas wonderful”, she said to him. Later he wondered whether she was referring to him or the playing of the band.) He was also the man who would turn up unexpectedly at your mother’s funeral.

There was no distinction in the life of Francis Jackson between his great gifts as a musician, and the deep propriety of the principles he maintained as he lived it. The result is an image of virtue that will remain lodged in the hearts and minds of those who knew him.