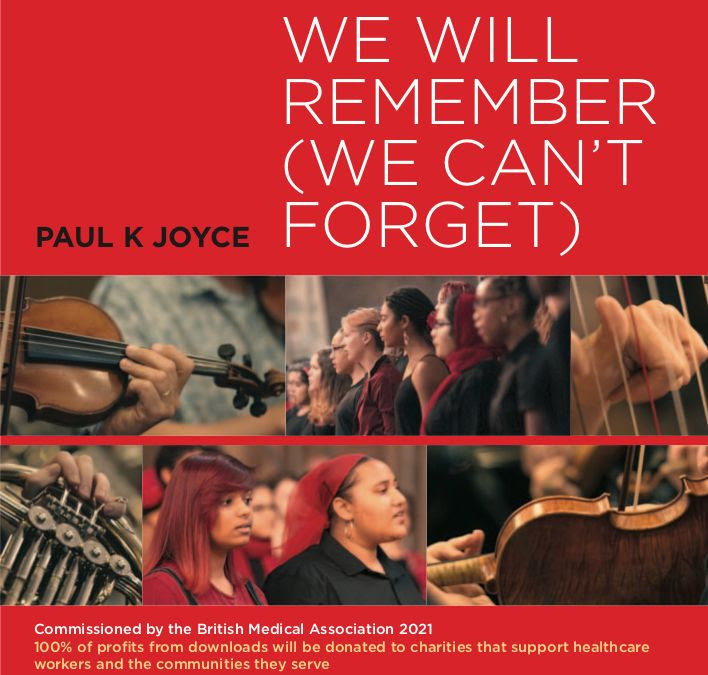 Commissioned by the British Medical Association 2021 to commemorate all health workers who lost their lives during the Covid-19 pandemic, British composer Paul Kevin Joyce has created We Will Remember (We Can’t Forget) as a digital only release.

The recording features the Royal Philharmonic Orchestra, conducted by the composer with the Chamber Choir of Burntwood School in London with Soloists Mia Carpene and Swaraa Vaenthen.

100% of the profits from digital sales and streams of We Will Remember will be donated to charities that support healthcare workers, their families and the communities they serve.

Hailing originally from Nottingham, Paul Kevin Joyce is a composer, producer, orchestrator, arranger and conductor. Following a science degree, he decided instead  to opt for a professional music career.

He is known for his music for theatre and television, including the 2005 BBC TV film The Snow Queen and the 2008 British TV film Clay. He wrote Can We Fix It? the theme song to the children’s television programme Bob The Builder  selling more than a million copies in the UK and Australia and for which Joyce received an Ivor Novello Award.

Joyce has also written a new contemporary musical work entitled, Celestial. Based on the poems of the late Johnnie Douglas-Pennant, this work is narrated by actor Michael Sheen and features Steve Howe on guitar and soundscapes by Chris Watson.