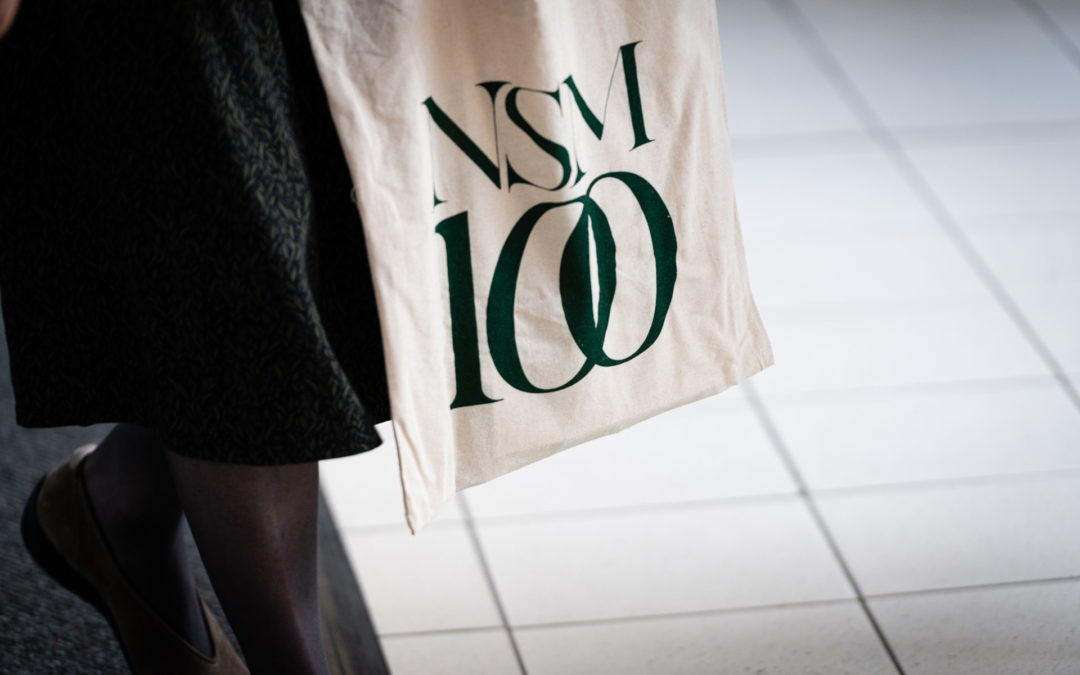 The foundation of what was to become the Northern School of Music can be traced back to the far-sighted initiative of Hilda Collens in establishing the Manchester Branch of the Tobias Matthay Pianoforte School in September 1920.

It grew from there, and was renamed the Manchester College of Music when it was incorporated as a company in 1943.

Plans to mark the centenary last year were unfortunately interrupted by Covid, but the improving situation this year eventually enabled the event to take place at the Royal Northern College of Music on Sunday 31st October.

Unfortunately, the dreadful weather on the day prevented a few guests from attending, but very close to the original 130 plus, having been greeted and seated, were served a very convivial Sunday lunch.

There was a real buzz at each and every table – the years rolled away, and the conversations and reminiscences flowed easily and naturally. Particularly remembered were members of staff from the post war days: Ida Carroll, Dorothy Pilling, Eileen Chadwick and Irene Wilde, all of whom had also been among the college’s earliest pupils.

Lunch enjoyed, all moved to the concert hall and were welcomed by the present Principal of the RNCM, Linda Merrick, to an appropriately programmed recital. This opened with a commanding performance of Walter Carroll’s C minor piano sonata by Annabel Lawson. A substantial and virtuosic work in four-movements dating from 1892, by a composer many of whose well-known piano pieces for beginners remain in print to this day.

Laurence Perkins played Robin Walker’s Twilight for solo bassoon. Composed in 1999, it is an effective evocation of the English Lake District that makes use of the wide range and colours of the instrument. Laurence was then joined by Michael Hancock in Richard Walthew’s Introduction and Allegro for bassoon and piano. Appealingly lyrical in style, it was composed in 1900 – music that deserves to be heard more frequently.

A series of short pieces for recorder and piano followed, for which John Turner was joined by John Wilson who, as John Turner noted, personified the piano at the NSM. Dorothy Pilling’s charming Conversation Piece was composed for John Turner, but arrived only after several years of cajoling!

Its origins in a vocal work are evident in the shapely melodic lines. Picnic by Michael Baron, a former pupil of the NSM Junior School, received its premier. Inspired by old photographs of happy NSM picnics, it is both a playful and whimsical recollection. John Wilson’s Reflections also received its premiere.

Nostalgic, even wistful, it reflects on the happy times of the composer’s years as effectively the resident NSM accompanist. David Dubery, who received composition lessons from Dorothy Pilling, wrote his concert waltz Mrs Harris in Paris for a proposed musical on a story by Paul Gallico. It is a charming miniature with just a hint of the theatre.

The final piece in this series, and another premier, was Robin Walker’s Her Rapture (In loving memory of Dorothy Pilling). Robin has the ability to create unique sounds from a solo recorder, noting that the piece seeks to “set down both the delight and propriety of this remarkable musical lady.”

The first part of the recital concluded with songs sung by baritone Christopher Underwood accompanied by Michael Hancock. Schubert’s The Trout, Poulenc’s Le Bestiaire and Flanders and Swann’s The Armadillo were presented with such musical communicative panache appropriate to each that the audience retired for the interval enchanted.

The second part was given over to Schubert – his Quartettsatz in C minor, played by the Victoria String Quartet: Benedict Holland, David Greed, Catherine Yates (guest viola) and Jennifer Langridge, was followed by The Trout quintet, for which members of the Victoria Quartet were joined by John Wilson (who was the pianist when the work was played at Ida Carroll’s funeral) and Leon Bosch. This music requires no introduction or commentary; the audience simply sat back and delighted in the accomplished performances.

All then gathered for a toast proposed by John Phillips (founder of the Fitzwilliam Quartet) and glasses were raised “to the Northern School of Music!” Conversations continued, but eventually people had to begin their journeys home in the unfortunately persistent grim weather, but with warm memories of the occasion to sustain them.

Such an event required considerable organisation and commitment, and particular thanks must be given to Alumni Relations Manager Lisa Pring, who, together with her team, ensured a splendid, celebratory day. Special touches, such as the Tote bags (pictured at top of the article) emblazoned with the centenary logo and containing various goodies, provided for all the guests, were much appreciated. But the entire event went so smoothly and efficiently, it couldn’t be anything but totally memorable.

Thanks are also due to the Ida Carroll Trust, particularly its chairman John Turner and trustee Michael Hancock for their sterling work with Lisa Pring throughout the planning stages.

The Trust, entirely appropriately, funded the occasion. It embodies the enthusiasm, pragmatism, foresight and, above all, the generosity of the remarkable woman whose name it bears. Its resources enable what she originally envisaged to support the study and making of music in a fundamental and practical way.

Note: There are plans to record some of the works included in the recital together with further associated music.