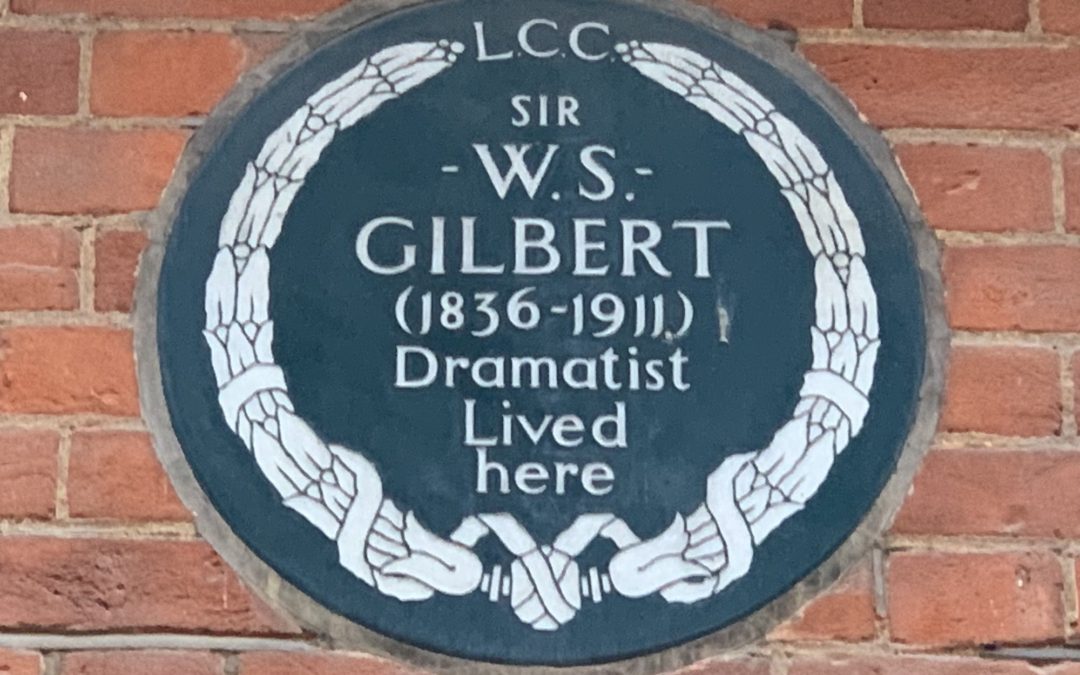 Remember our lockdown challenge which asked readers to send us a photo and description of plaques which celebrated British composers?

Well, the project is ongoing and here are two more from Kensington in London which I thought were really interesting:

Tradition has it that the dramatist William Schwenck Gilbert used the proceeds his collaboration with Arthur Sullivan and Patience in 1881 to fund this extravagant Flemish style residence for himself in Harrington Gardens. Gilbert commission the house from Ernest George and Harold Peto which forms one of a row six individual and equally flamboyant piles.

Gilbert announced to the contractors, Stephens and Bastow, that he would be taking up residence in October 1883 regardless of whether or not it was completed. He kept a close work on progress apparently watching the craftsmen at work with great interest.

It was from the first floor study of this house at number 39 (originally numbered 19) that he completed librettos for The Mikado in 1885, The Yeoman of the Guard in 1888 and The Gondoliers in 1889.

His preferred working hours were from 11pm to 3am because ‘no one can interrupt you, unless it be a burglar’.

Atop the crow stepped gable is a sailing ship. This relates to Gilbert’s claimed descent from the seafarer Sir Humphrey Gilbert – and not to HMS Pinafore as assumed by one unfortunate visitor who was immediately corrected by Gilbert with the quip: ‘Sir, I do not put my trademark on my house’.

Notice that the wreathed plaque is not in the more usual blue colour but a smoky grey. This was at the request of the leaseholder in 1929.

Kensington Square is an oasis of calm hemmed in by underground stations, shopping arcades and other developments. King’s Square (as it was originally called) began in the 1680s as a speculative development by a Thomas Young with Number 17 being the largest of the original houses dating from 1686.

Two hundred years later it was bought by a 38-year-old Hubert Parry who used it as his London base until his death in 1918. Parry christened the drawing room ‘with a Brahms song’ and much of his music such as Jerusalem in 1916 was composed in the house – despite the fact that his wife Maude ‘never cared for his music’.

The building was probably refronted in the later 18th century and bears a rectangular blue plaque which was added in 1949.

Parry’s daughter, Lady Dorothea Ponsonby lived there at the time and wanted a round plaque ‘which is so much more artistic, but I accept the fact that it could not be done artistically’.

Do let us have any more pics and stories of any plaques you discover.