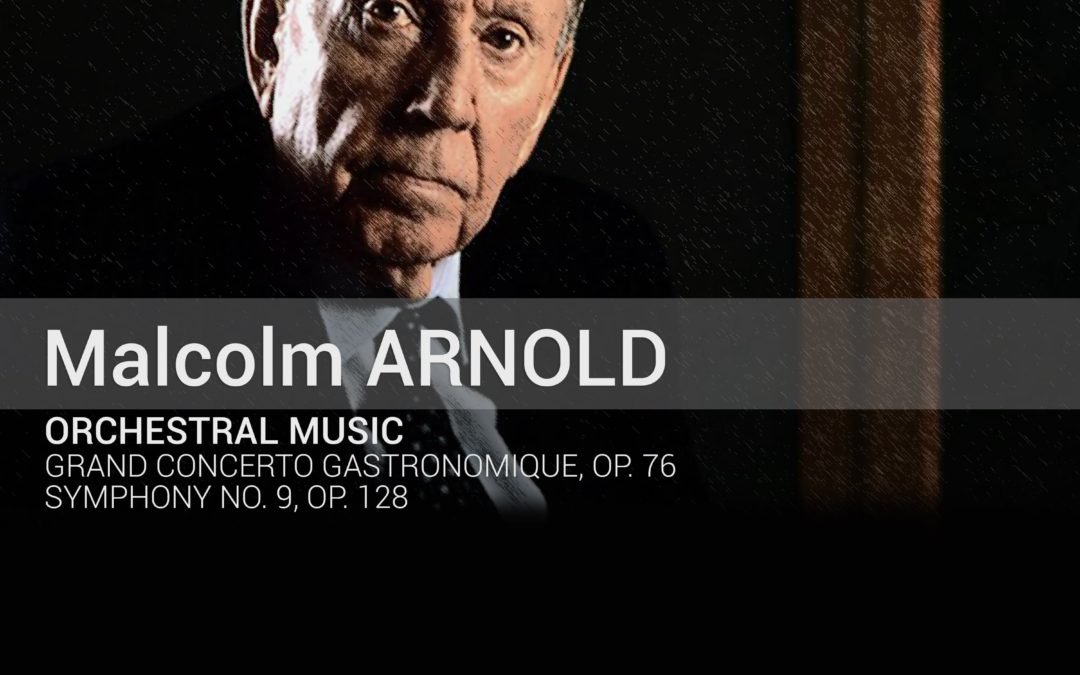 Fifty plus opus numbers and 25 years separate these two works and it shows.  Arnold’s mental health problems in those years are well documented, and the effect his illness had on his writing is instantly apparent.

The ‘Grand Concerto Gastronomique for Eater, Waiter,Food and Large Orchestra’ is a theatrical work written for the Hoffnung-inspired Astronautical Music Festival of 1961.  It makes very little sense without seeing the antics on stage, but the musical numbers for a full gastronomic menu including Soup (Brown Windsor), Peach Melba etc. show Arnold’s gift for cinematic painting in glorious technicolor. The orchestra clearly love it.

Arnold 9 from 1986 has had a troubled and well-documented history. When the score was sent to his publisher Faber Music, they were horrified to see that much of the music was stripped back to simple two-part writing, there was page after page of empty staves, and it had an almost skeletal look.

Worse, the last movement was marked Lento and lasted almost 25 minutes, longer than the other three movements together. It was felt that it was a travesty, that the old man had lost it.  But his good friend Sir Charles Groves saw the score and became convinced of its worth.

In 1988 he was able to conduct a private run-through with the now defunct Orchestra of the National Centre for Orchestral Studies, and yes, it worked. But still no professional orchestra would programme it. The première eventually took place in 1992 with Groves conducting the BBC Philharmonic.

Since then, it has divided critical opinion. There are glimmers of the Arnold of old, but it is the music of one who, he himself, said had ‘been through five years of hell’ and one cannot experience that unchanged.

Mr Gibbons has been a sterling supporter of British music and of Malcolm Arnold in particular. At the 2011 Malcolm Arnold Festival he led the Worthing Symphony Orchestra in a magnificent performance of the ninth.

He has clearly thought about the symphony since then, and this interpretation, while it cannot be disregarded, should not be up there with the best as he flagrantly disregards the composer’s metronome markings.

In the first three movements he adopts slightly slower tempi than Arnold indicates, and while that is just about acceptable, his decision to take the slow movement much faster, distorts the shape of the whole work. In Mr Gibbons’ hands the finale lasts c.18 minutes while most conductors come in between 23- 24 minutes.

He clearly knew this would be controversial and he attempts, unconvincingly, to justify it in his liner notes. At his chosen speed the unbearable weight of sadness is missing, and the ‘last post’ fanfares sound perfunctory. Even Arnold’s luminous orchestration sounds attenuated.

Arnold knew exactly what he was doing and what he wanted was very slow.  I asked him about the symphony once and he said ‘I wrote what I meant. That is what composers do’.

The orchestra plays beautifully, and the sound is excellent, but this is not how Arnold heard his symphony.