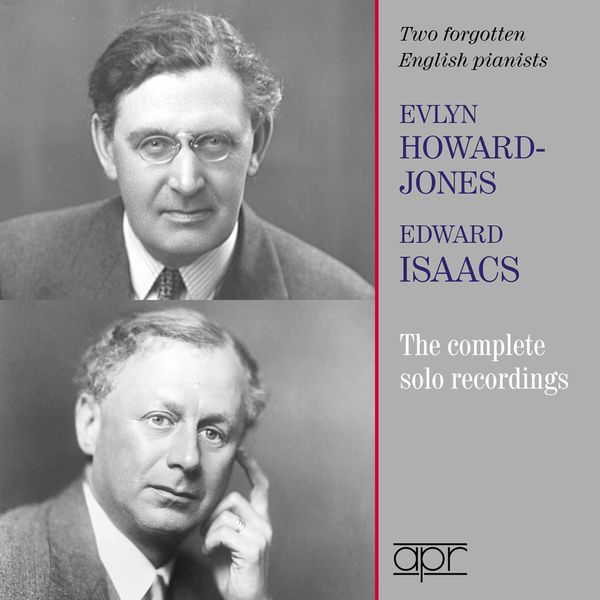 Since 1988, APR Recordings are internationally recognised for their issues of first-class transfers of historic recordings, primarily of great pianists waiting to be re-discovered.

This is particularly so in the case of Evlyn Howard-Jones (1877-1951) and Edward Isaacs (1881-1953) all of whose published recordings are being made available on CD for the first time.

Delius enthusiasts will know the name of Evlyn Howard-Jones and Disc One includes that composer’s Three Preludes and Dance for Harpsichord (but played on the piano), and four of Five Pieces dedicated to him. The rest of the disc contains numbers 10-17 of Bach’s 48 – Book 1.

These were originally planned to be part of a complete cycle, recorded in turn by various pianists (Harriet Cohen had already recorded numbers 1-9) but the project never went further. Howard-Jones’s playing here is beautifully clear, colourful and controlled.

The rest of the disc features Beethoven’s ‘Moonlight’ Sonata, Six Ecossaises (in the Eugen D’Albert version) and Rondo in G Major (an unpublished test-pressing). Liszt’s Liebestraum no.3, Waldesrauschen and Brahms’ Capriccio in B Minor completes the disc. All the playing is musically and technically refined, and the Delius recordings are, not surprisingly, of historic value.

Where Howard-Jones is thoughtful and restrained, Edward Isaacs lifts us out of our seats! One of Manchester’s most celebrated pianists, he was invited to record for Regal (Columbia’s budget label) between 1926 and 1928. The disc starts with Bach’s French Suite in G Major (three movements only), Handel’s Fantasia in C Major and the ‘Harmonious Blacksmith’ Variations, a dramatic Beethoven Pathétique Sonata, and an idiomatic Schubert Moment Musical in F Minor.

But the bulk of the disc is of Chopin – 5 of the Waltzes, and ‘My Joys’ together with a classic recording of his Bolero – one of the finest I have ever heard. The disc concludes with Liszt’s Liebestraum no.3 and Tchaikovsky’s Humoresque Op.10 no.2. Isaacs sounds in complete control and full of energy – and yet had totally lost his sight before these records were made – astonishing!

Jonathan Summers (of the National Sound Archive) provides a substantial liner-note of 15 pages covering both pianists in detail, and contains a group photo of Howard-Jones, the Deliuses and Beatrice Harrison, so this is a most welcome and important historic release which I hope will rehabilitate two very fine British pianists.