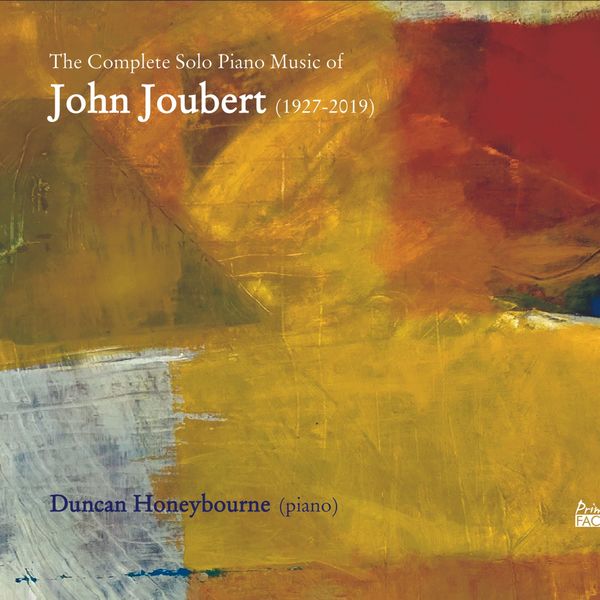 Since the first release of this disc in February 2019 (just after the death of John Joubert in January) a very important early work of his has since come to light: Evocations – A Rhapsody for Piano, dating from 1949.

In view of its quality, Duncan recorded the piece especially for this second release, having given the modern première in St. James’, Piccadilly on 23 June this year. Prior to this, Duncan had performed all the remaining works in the presence of the composer at a public concert in Birmingham for John’s 90th birthday in 2017. He has known and worked with him for over two decades.

Disc one contains all three Piano Sonatas. The First – dedicated to the South African pianist Lionel Bowman (1919-2006) was published in 1957 by Novello (Joubert’s main publisher). The Second – dedicated to British pianist Carl Hickman (1936-2021) appeared in 1972, and Piano Sonata no.3 was written for Duncan Honeybourne and premièred in St. John’s Church, Weymouth in April 2006. It was later revised and re-issued in 2010.

Disc two contains the Dance Suite – dedicated to the South African pianist Adolf Hallis (1896-1987) and the Lyric Fantasy on themes from ‘Jane Eyre’. But, as stated above, the work of real interest here is Evocations, which dates from the time John was studying at the RAM with Howard Ferguson and who premièred it there in 1950.

Lionel Bowman gave the South African première that same year, after which it vanished entirely from view. Lasting just over 20 minutes Evocations is an extended tone-poem full of inventive colour and vitality, and very assured for a 22-year-old student! It fully deserves to be on this disc, and hopefully awaits publication in the future.

Christopher Morley has supplied a three-page essay on the works in addition to Duncan’s own notes, and the 2-CD set comes in a very handsome three-part jacket format from Prima Facie. (However, I have found a repetition of a short paragraph on pages 1&3).

The recorded sound is superb – considering two different venues were used (Holy Trinity Church, Hereford for Evocations, Southampton University (Turner Sims Hall) for the remainder). The playing is exemplary throughout – a very appropriate tribute to one of the most substantial and significant composers of our time.