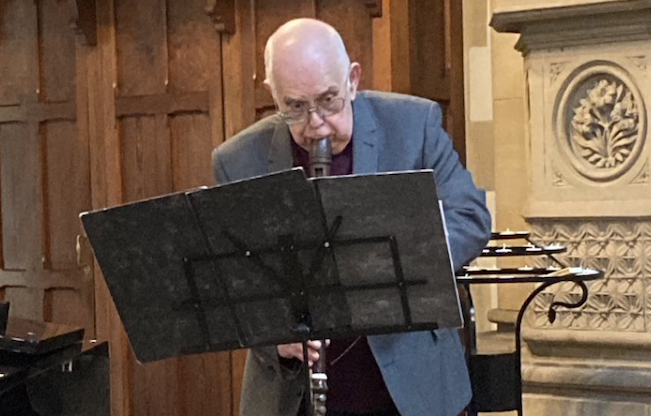 Last year’s entire season of the recently established “Music on the Moor” concert series, like many others, was cancelled as a result of Covid-19, and this year’s series likewise.

An organ recital in St Paul’s church, Heaton Moor in August did, however, attract an audience and paved the way for this one-off concert to celebrate 25 years of the record label Prima Facie, and the 60th birthday of its co-founder, Steve Plews.

It was additionally in memory of Steve’s mother Christina (‘Nina’), who died earlier this year, and also of Giles Easterbrook, Steve’s co-founder of Prima Facie, whose sudden death at the beginning of September has shocked and saddened us all. The return to live performance is proving an emotional experience for performers and audiences alike, but the combination here of the celebratory and the commemorative was especially poignant.

Mozart’s Eine Kleine Nachtmusik provided a welcomingly familiar opening in which the Victoria String Quartet was joined by Gavin Barras. The Quartet was then joined by John Turner for three dedicatory pieces.

Christina, commissioned from Daryl Runswick in memory of Steve’s mother, received its first performance: a heartfelt tribute in which the flow of recorder melody (with just the hint of a Scottish flavour) in the outer sections framed an even warmer central section for the strings alone.

The remarkably eclectic mix of the programme was underlined by Steve Plews’s Two Jazz Pieces in which he was joined by Gavin Barras, Steve and Gavin are very accomplished jazz musicians, and the audience was treated to some spellbinding music in a genre perhaps less familiar to many, but enthusiastically received.

The first half was concluded by Alessandra Pompili with two piano pieces by Thomas Pitfield: Menuetto, light and elegant, and Solemn Pavan, rich and intense. The first movement of Alan Hovhaness’s Greek Rhapsody No.1 provided an exotic contrast.

The Victoria String Quartet opened the second half with Benjamin Britten’s early Three Divertimenti; the young composer honing his quartet-writing skills with considerable panache. John Turner has given hundreds of first performances in his quest to extend the recorder’s repertoire, and here added a particular international note by premiering Florence-based composer Fulvio Caldini’s Sonata No 2 for recorder and piano, in which he was joined by Harvey Davies.

The rhythmically complex and energetic ‘Overture’ (for descant recorder) is followed by a soothing ‘Berceuse’ (tenor recorder). A return to descant recorder is made for the concluding Toccata in which the recorder in parallel intervals with the piano provides a piquant sonority. This is a substantial and effective work that deserves to find a place in the instrument’s repertoire.

Simon Passmore revelled in Steve Plews’s jazz infused Prelude No. 1 for piano. Extrovert, even rhapsodic, its structure is nevertheless anchored by a recurring passage of distinct harmonic and rhythmic identity that forms a sort of reflective ritornello.

Thomas Pitfield’s Piano Trio No. 1 was composed in the 1930s and dedicated to his wife Alice. It is “young man’s” music and fascinating in the way the many and varied influences are brought together in a work of some maturity. In places the harmony is even not far removed from jazz, but this is just one aspect of a kaleidoscopic and enthralling work.

Its three movements: Molto Moderato, Andante Pastoral and Allegro Moderato ma agitato, played with much authority by the Pleyel Trio, brought this very special concert to a particularly satisfying conclusion.

As noted at the beginning of the review, the atmosphere was extraordinary. The excitement and commitment of all the players, and the enthusiasm and appreciation of the audience were intensely palpable.

Reflections on the celebrations and memories seemed to extend way beyond the immediate. It is very much hoped that “Music on the Moor” will be able to resume next year – this concert was a reminder of just how much we have all missed!