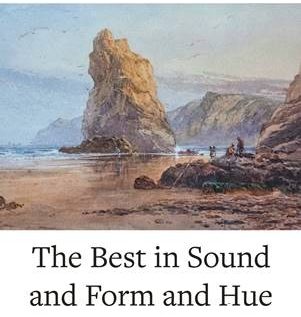 The Best in Sound and Form and Hue is a fascinating work of social history based on extensive primary-source research by the author, John Hugh Thomas about John Squire, musician and artist who lived from 1833 – 1909.

This is the biography of a banker and skilled landscape painter, but more importantly a musician who had great influence on musical life in the West of England and South Wales.

John Hugh Thomas’ biography places the life and career of John Squire in its broader cultural and social context within Victorian Britain.

John Squire was an excellent violinist and conductor, and an artist of national stature. He was born in Cornwall into a banking family which encouraged an active interest in education and the arts.

As a bank employee throughout his professional life, his career took him to several towns and cities in his native Cornwall as well as Bristol, Ross-on-Wye, Hereford, Kingsbridge in Devon and Exeter, before he arrived in Swansea, in 1883.

Author John Hugh Thomas said: ‘The driving forces which most influenced the creation of this biography were serendipity and my natural curiosity.’

The book is founded on an extensive investigation of primary sources, particularly contemporary newspapers. The author’s research took him to the Colindale Newspaper Library in London as well as to places associated with John Squire to try and discover as many of his paintings as possible.

Squire was a skilled painter, especially of landscapes in Wales and his native Cornwall, and his work was exhibited at the Royal Academy; this secondary aspect of his cultural life is also explored in the biography.

John Squire’s impact and lasting legacy were huge. Some of those whom he had taught in Swansea progressed to enjoy national, and even international acclaim, while others were leading lights in the expansion of chamber music and the emerging Early Music movement.

Another consequence of this itinerant biography is that the volume reveals details about networks of musicians, amateur and professional, across South Wales and the West Country. It also links Squire’s endless energetic activity and the work of institutions such as the Royal College of Music and the Eisteddfod.

‘This was the time when the British Isles, or more particularly England, perhaps, had the unfortunate reputation of being known as das Land ohne Musik. Yet the life of John Squire shows that nothing could have been further from the truth,’ said John Hugh Thomas.

The text is accompanied by 20 illustrations, some black and white and others in full colour, and including many of Squire’s acclaimed paintings.

‘His account of what musical life in this country was like, at a time when Britain was widely regarded as unmusical, is nothing short of an absolute eyeopener…’ Dame Janet Baker, CH DBE