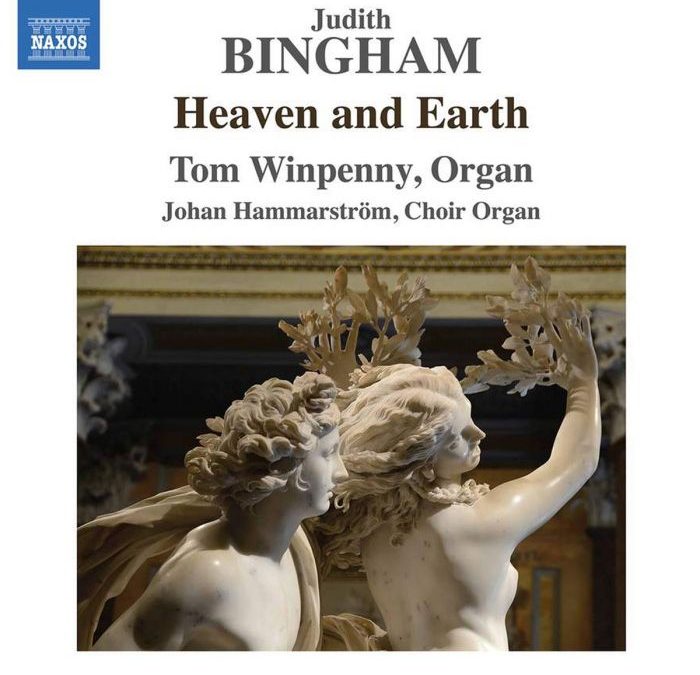 Västerås Cathedral in central Sweden, where this CD was recorded, boasts two fine organs. Tom Winpenny plays the main organ, and in three of the works he is joined on the smaller choir organ by Johan Hammarström. So well co-ordinated are the two performers however that we could almost be hearing a single giant instrument.

In the accompanying programme note, written by Tom Winpenny, he refers to Judith Bingham’s ‘wealth of imagery, sincerely transmitted through a rich harmonic language and a sensitivity for textural sonority’.

At the outset of the first piece, Heaven and Earth, which uses the two organs, I was reminded of the opening of Ravel’s Daphnis and Chloe, and in fact much of Bingham’s music on this CD recalled the French impressionist composers, in particular for the pictorial or literary aspects of their inspiration, and the open textured transparency of their writing. For the most part, Bingham does not really copy them, but she achieves similarly colourful and referential capabilities in her writing.

Heaven and Earth is inspired by the well-known painting by Millais of Shakespeare’s Ophelia floating on the water, but it is the plants surrounding the water that inspired Bingham. The Shakespeare song How should I thy true love know rings out in the piece.

There are seven movements in Vanished London Churches, including an introduction entitled Candlelight. The first church, St Michael’s, was demolished to make way for the new London Bridge, the others were mostly destroyed by fire, and Bingham captures that so well in her splendidly atmospheric music.

Bright Spirit, originally composed for wind ensemble, works well on organ, arranged by both Bingham and Tom Winpenny. Its funereal tread responds to Shelley’s poem on his dead son William.

Kalmar Rising consists of two pieces on the CD including the dazzling harmonies of the final piece, Eternal Procession. Mountain Music and Daphne’s Room are unusual both in inspiration and organ colour, while Roman Conversions is, in a way, a twin of the London piece. Even more powerfully atmospheric, it has five darkly mysterious movements, the painting in music being uncannily enigmatic, yet always alluring buildings from a remote past.

The playing of both organists is inspirational for both clarity and precision, and all of Bingham’s music on the CD will be instantly and easily approachable for most listeners.