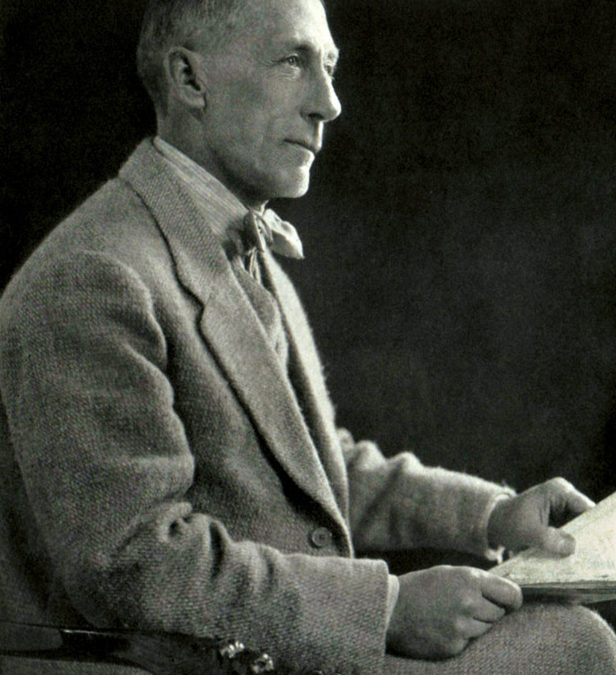 My mother always used to say with a sigh, “I wish you could have known your grandfather” (pictured above in 1929). She loved him dearly, and kept a rare full-face picture of him on her desk.

In recent years feel I have got to know him, through sorting out his archive to go to the British Library, and editing a compendium of his work, The Greater Light, with Stephen Connock. Through his letters and articles I have sensed his humour, seen his calling to be a Church musician, and listened to the beauty of his secular pieces.

As a small child, my brother Martin (now the composer Dirk Mont Campbell) remembers sitting on Shaw’s lap fascinated by his face. By then Shaw was in his late 70s, and the birthmark he had been born with had grown and distended; it was that which so fascinated my brother.

If you were not used to it of course, it was terribly shocking, and this reaction from every stranger he ever met was a burden, if not a disability, that the man had had to live with all his life. In 1957 a young Jane Manning was given a tactful warning about it when singing in Shaw’s ballad opera Mr Pepys, her first performance in front of the composer.  The birthmark was never ever mentioned at home, and he only referred to it once, to say to his wife, “I am as God made me.”

When little, my mother would knock on the door of his study to see if she could come in for a cuddle, and if he was busy with a score, he would gently say, “not now darling.”  Finding the silence a composer needs is a problem if you are a composer with children.

The solution for the Shaws was to rent Black Boy Cottage, part of the Dashwood Estate in West Wycombe where he was able to enjoy riding about the countryside and compose in peace. It was here that Shaw received Elgar’s letter confirming the arrival of his Heine song sequence, Water Folk, first performed at the 1932 Three Choirs Festival in Worcester.

Shaw worked unceasingly in his campaign to raise standards in church music, travelling round the country giving lectures, adjudicating and writing articles. He also worked to raise the standards of music taught in schools; this heavy workload was only possible through the continual support of my grandmother, Joan, who devoted her life to him.  She was also secretary for Vaughan Williams and Shaw when they co-edited the original edition of Songs of Praise in 1925.

For the second edition published in 1931, my grandmother recalled Shaw giving the English poet Eleanor Farjeon a tune that needed some new words; Farjeon had already helped out in this way with the Oxford Book of Carols. Normally, Shaw explained, things were the other way about, but given a tune, Farjeon could produce a set of verses with perfect fit! (T S Eliot was not able to manage this when collaborating with Shaw in 1934.)

The tune in question was an old Gaelic melody entitled Bunessan, then set to a carol whose words would not have chimed with editor Percy Dearmer’s socialist principles. Farjeon helpfully altered her poem Morning has Broken to fit the tune, where it famously became hymn number 30, and has remained popular for the last 90 years.

As it happened, a year or so beforehand, the Shaws had been getting serious letters from their bank manager. Farjeon, by then a close friend, volunteered some money to help them out: “Please don’t mind me doing this, and make me happy by keeping it as a gift, made out of love to you both, and my admiration of Martin’s beautiful work”.

Placating his bank manager was no doubt why Shaw wrote his reminiscences Up to Now  (not really an autobiography as the publishers say). Regarded by many as a literary gem, its dry humour details his adventures reviving Purcell’s music for Edward Gordon Craig’s theatrical productions, travelling the Continent conducting orchestras for the dancer Isadora Duncan, and among many other things, the eccentricities of rural vicars.

Vaughan Williams was a lifelong friend who took a great interest in our family. He was my uncle Diccon’s  ‘special friend’ and benefactor (having refused to be his Godfather), who paid his fees to attend the Royal Academy and Cambridge. He came to my parents’ wedding. He was also mid-wife to Shaw’s The Redeemer, a cantata-length oratorio.

This work, originally titled The Tree, was the focus of what he and Vaughan Williams called a ‘field day’, a time to comment on each other’s work during a stay at The White Gates, the home of Vaughan Williams. Shaw’s manuscript of The Tree had been refused by publishers on account of the war-time paper shortage but was welcomed later with open arms under its new title The Redeemer.

I think Shaw’s grief at the recent death of his composer brother Geoffrey is reflected in its beauty and sadness, which brings people close to tears. Vaughan Williams commented: “It is a noble work, and should be done everywhere” and it was, at an international level. Shaw regarded it as his best piece, though I think I prefer Sursum Corda, a cantata with words written specially for him by Laurence Binyon. Then again, I have yet to hear Easter, written with John Masefield, or The Changing Year written for The Festival of Britain. There will always be more to know about Shaw.