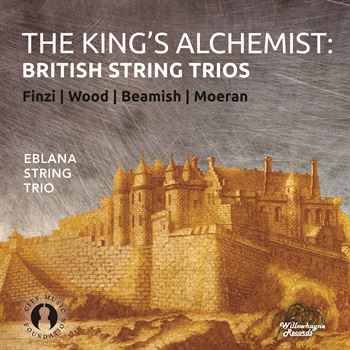 I was told, as a young composer, that the writing of string trios was a challenge, and that was why fewer had been written than string quartets, and why some composers, often well-known ones, never tackled the form.

Before I tried my hand at one, I studied the score of Finzi’s Prelude and Fugue Op 24 (here recorded). What I found so important, and still do, is how Finzi defies the Jeremiahs and writes a work rich in harmony and brilliant in counterpoint. His love of Bach shines through, as well as his joy at writing for strings. His textures are airy but fulsome. It was a good lesson.

I wish that I known of Moeran’s String Trio as well. Polyphonic with a great independence of parts and a clear musical structure mark, it has impact, as does the dancing 7/8 first movement.

The Adagio seems to be a memorial at the news of the tragic death of Moeran’s close friend Peter Warlock, but taken a little faster than I would like by this ensemble. The scherzo bounds along in compound time before fading into a sad Lento. The final Andante grazioso is full of the kind of warm melodies we associate with Moeran.

There are two contemporary works. It is Sally Beamish’s highly original The King’s Alchemist that gives the disc its title, the King being King James IV of Scotland, killed at the battle of Flodden Field (1513) and the alchemist being the eccentric John Damian, who has so fascinated Beamish. (The latter attempted to fly by jumping off Stirling Castle’s battlements.)

The work has four movements and is based in part on the L’homme armé melody used at the time for Mass cycles including one by the King’s composer, Robert Carver.  Also, for movement three there is a Pavane, a popular dance of the period.

The CD also includes a beautiful work by Hugh Wood, one of our most senior figures. His Ithaka Op 61 is, as the composer admits, a programmatic piece inspired by Cavafy’s poem Ithaka, which itself is based on the Travels of Ulysses as in Homer’s Odyssey. It incorporates two fugues and a wide variety of often almost atonal harmonies, producing strong reactions expressed through these harmonic tensions. A fine work indeed.

The performances are wonderfully convincing and the recording is immediate and detailed. This is well worth exploring.