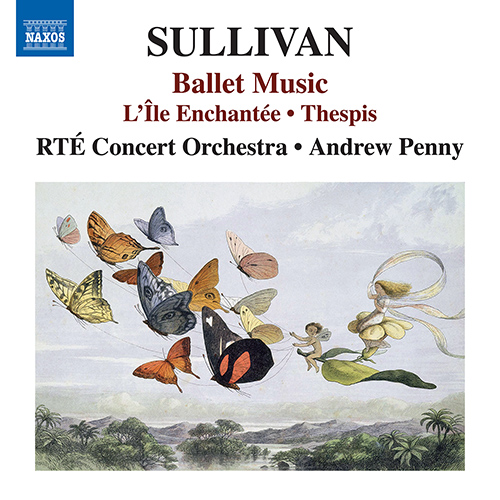 This intriguing CD allows the interested listener some insights into what might be termed ‘the lost Sullivan’ comprising as it does material from what is a little known, and still less frequently performed, aspect of the composer’s oeuvre.

L’Île Enchantée may be early Sullivan but already it demonstrates the composer’s winning way with melody, dressed in colourful orchestration – the fruit of Sullivan’s studies in Leipzig. ‘In London he soon established his reputation,’ writes Sullivan expert Selwyn Tillett, ‘as a composer of ballads, art songs and also a general music factotum behind the scenes at Covent Garden.’

Taking its cue from Italian and French practice, Covent Garden inserted a ballet, often at the end of the evening’s entertainment. L’Île Enchantée fulfilled this function at the end of performances of Bellini’s La Sonnnambula.

Despite the fact that L’Île was very well received and was given a number of performances, the autograph score soon disappeared.  However, thanks to Selwyn Tillett and Roderick Spencer we now have much of the material restored. In this world première recording we have the opportunity to hear this previously undiscovered and attractive music.

The quality of the inspiration is generally high: in particular the elegant Mendelssohnian Prelude, a witty Dance of Nymphs and Satyrs, a storm scene that would not disgrace William Tell, and the imaginatively scored Scene des Dispantions.  Mendelssohn figures again (although to a lesser extent) in the Scene de Jalousie. The three concluding numbers are charming but rather lack individuality.

The remainder of the disc consists of a selection of surviving numbers for Thespis or The Gods Grown Old. These pieces marked the beginning of the composer’s collaboration with W.S. Gilbert.  Selwyn Tillett in his informative programme note describes Thespis as a mixture of genres – ‘effectively a superior pantomime’.

As mentioned above, with all comic operas of the time a ballet was interpolated – in this case the work of Sullivan himself. Unfortunately, the composer’s score only amounted to a sequence of fragments which in the present CD were revived once again by Spencer and Tillett.

Andrew Penny and the RTE Concert Orchestra do Sullivan’s music proud – there is stylish and committed playing in evidence throughout.

This CD fills a noteworthy gap in our knowledge of nineteenth century theatrical (that is, non- operatic) repertoire. It will prove a rewarding experience for the listener.