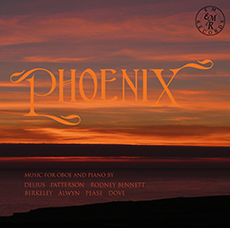 EM Records continue their outstanding support of tonal British music with this disc of British music for oboe/cor anglais and piano.

Britain has done very well producing high calibre oboists and there have been many composers prepared to write for them. The album includes three world première recordings, and four works by living composers, though why at this point in the 21st century they are all male is beyond me.

It is centred around and named after Paul Patterson’s Phoenix Sonata, an arrangement of his oboe concerto, a spiky, colourful work a long way from the avant-garde works of his younger days. First on the disc though is Four English Dances by Richard Rodney Bennett, an elegant arrangement of John Playford melodies, from the time Bennett realised he wanted to write tunes not note-rows.

William Alwyn’s Oboe Sonata, from 1934 is a mainly pastoral, contemplative work which allows Ms. Hands to demonstrate her beautiful tone. This is easy to listen to but not to play this well.

Snake by D.H. Lawrence inspired Michael Berkeley to write this sinuous work for the unusual instrumentation of solo cor anglais.

Westbourne Nocturne by Jonathan Pease (pianist and composer) again uses the cor anglais, this time with piano; it depicts a journey along the now mainly hidden Westbourne. This is a stylistically varied work that sounds as though it is in search of a film.

The Irish folk song My Lagan Love is the basis for Jonathan Dove’s glorious post minimalist fantasy. Its intricate, interlocking rhythms are tightly managed by the players. The CD ends with an effective arrangement by Robert Threlfall of music by Delius, taken from his Dance Rhapsody No. 1.

The disc is beautifully recorded and performed by the duo.