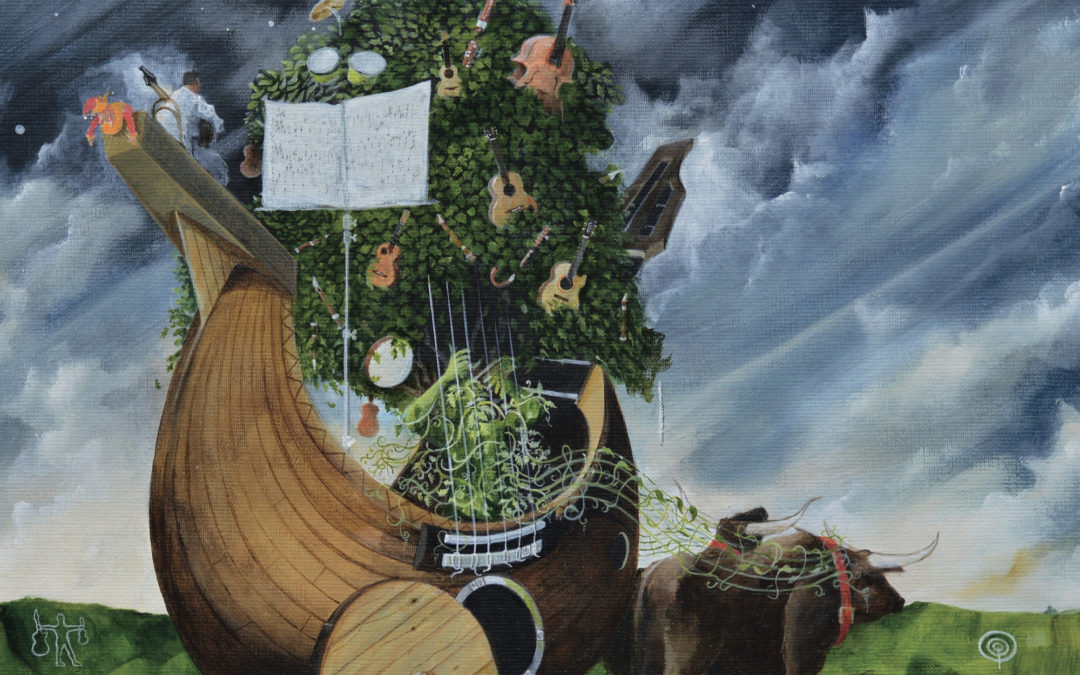 A MUSICAL FANTASY FOR GUITARS, UKULELES AND CELLO

Rewilding is available on vinyl as a limited edition gatefold with artwork by the English  ‘unrealist’ artist, Jon Everitt.  Although there are no plans for a CD release, the album is widely available to stream or download, including hi-rez audio formats (included in the vinyl price).

It is hard to classify this music. It has strong flavours of traditional folk music, early music perhaps, and film or television music too. It is fresh, attractive and easy to listen to. The playing manufactured in the studio is of exceptionally high quality, at least that’s how it sounds.

The record is divided into two halves, the first has four pieces under the overall title Above Ground, the second, with three pieces, is Below Ground. Some of the titles need explanation. The first, Aurochs, refers to an extinct breed of cattle from which our modern breeds are said to be descended.

The second in Below Ground, Triskelion, refers to an ancient Celtic triple spiral with sacred meanings, dating back to the Neolithic era. The subtitle of the same piece, Tinner’s Rabbits is probably related to a Morris Dance from the Dartmoor area.

The second piece in the Above Ground section entitled Forr All Mannkinne Nede (spelled thus) had an Elizabethan feel to it, a touch of Peter Warlock perhaps. The third number in this section, Knepp (The Return) refers to Knepp Castle Estate in West Sussex. Several of the pieces contain moments of birdsong recorded there.

The pieces in the second half, in particular the last two, are dance-like with definite folk-cum-early-music connotations, exploiting the crumhorn for instance.

Guitars and cello are an attractive blend, and the percussion sounds, bells and glockenspiel, give the music a kind of spicy freshness. Actually, this music is quite unique. I found it refreshing, rhythmically compelling and not like anything I had heard before, and at my age that is quite surprising!