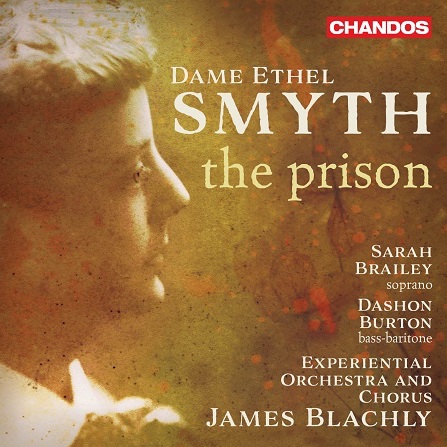 The Prison (1929 -30), Dame Ethel Smyth’s only symphony and her last major work, is not really a symphony in any conventional sense.

It was published as such and at that time was not alone in this category. Mahler’s Das Lied von der Erde (1908 – 09), nowadays thought of as a song cycle, was called a symphony at its first publication.

But The Prison is not really like a song cycle either, more like a short non-staged opera or oratorio. Elgar’s The Dream of Gerontius is mentioned in the accompanying programme note as a similar work. It is for two solo singers, chorus (in its function, not unlike in Greek Drama), with full, opulent symphony orchestra.

The soloists, soprano, Sarah Brailey and bass-baritone, Dashon Burton are both masterful. The Experiential Orchestra and Chorus, founded in New York City by conductor James Blachly, are made up of top freelancers and members of prestigious chamber ensembles. Their sound is radiant and lavish.

I did have problems with the text by H. B. Brewster (Henry Bennet). His metaphysical ideas are exceptionally arcane, and for me, difficult to understand.

The Prisoner, sung by Dashon Burton, though innocent, awaits execution. He converses with his soul, sung by Sarah Brailey. Their ideas are echoed and developed by the Chorus. The prisoner concludes by not only accepting his fate, but welcoming it enthusiastically:

This is no leave taking …
Let there be banners and music!

Well, Dame Ethel certainly gives us that aplenty, as do all the performers, but I can’t say I understand why. Dame Ethel’s music amplifies the emotional sense of the words, so full of orchestral and vocal colour. There are several purely orchestral interludes, richly expressive and pictorial.

How do I describe the music itself? Late German romantic, I think. (Dame Ethel did study at the Leipzig Conservatoire). I was strangely reminded, especially in the orchestral interludes, of the film music of Erich Wolfgang Korngold, although his scores were composed some five or 10 years later.

Both composers shared a similar musical ambience. Surely both would have been familiar with Schoenberg’s lavishly romantic Gurrelieder?

Lavish and romantic are certainly words I would use to describe this latest Chandos recording.