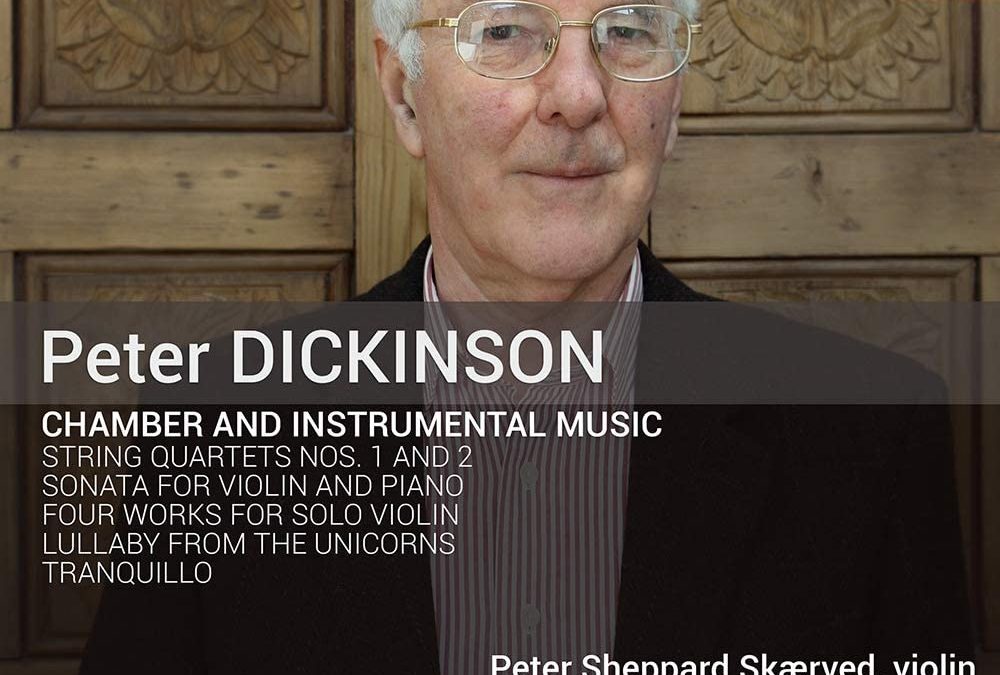 Though the music in this disc stretches from Metamorphosis in 1955 to the 2018 revision of Tranquillo, both for solo violin, its focus is rather more on the earlier part of Peter Dickinson’s compositional life.

The three largest works are the Violin Sonata and the two String Quartets.

The Sonata (1961) is one of the works written during his American sojourn and is an example of Dickinson embracing, to a degree, serialism. Its abrasive elements, and its withdrawn, even brooding introspection are largely swept aside in an extrovert and brilliant finale with a panoply of changing metres and dynamics.

The quartets were composed nearly two decades apart. The First is compellingly terse and unresolved and has curious little figures and pizzicati, with a finale that revisits earlier material. The Second is both structurally and sonically unusual. A recording of a piano is juxtaposed with the live playing of the quartet.

The former is fragmentary, the latter beautiful, the music predominantly slow and refined, refractive. The piano gradually coalesces and becomes more cohesive and insistent in its statements, albeit unsynchronised with the quartet, until in the second very brief movement, Rag, the full force of its intent is unleashed. American and European traditions conjoined in a most sonically vigorous way.

Dickinson’s body of music for solo violin is both richly personal and highly effective. The Air and Metamorphosis were originally written for flute, the former quietly luminous and the latter sharing its quality of raptness. The process of metamorphosis ensures that a powerful trajectory is achieved in four minutes of evolving interest.

The Fantasia (1959) is quite substantial at nine minutes and encodes New York skyscrapers, but on a more concrete level also employs the serial-like devices that so attracted Dickinson at this time. Sonically compelling, it would be interesting to know if Bartók – his solo sonata in particular – was in Dickinson’s mind at the time of composition.

The lullaby from the uncompleted opera The Unicorns is a beguiling song, the Quintet Melody showing again his abundant lyrical gifts. Tranquillo, one of the Adagios from his excellent Violin Concerto is redolent of popular song.

These are all first recordings in excellent sound and are played with utter conviction. Dickinson’s own notes set the seal on things.