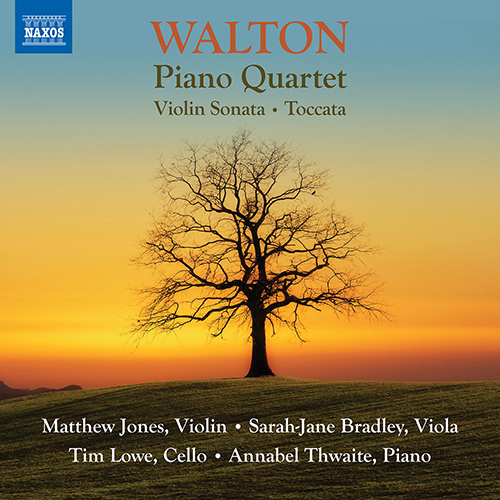 I’ve somehow never heard any of Walton’s chamber music: and had I come across much of this disc unawares I’m still not sure I’d have known I had.

From the first folk-like theme the Piano Quartet of the teenage Walton breathes pure English Pastoral – an impression only reinforced by the heat-haze of the delicious slow movement. If told this was a lost work by Herbert Howells I’d have had no reason to doubt.

True, the scherzo has a slightly astringent fugal energy, but only the last movement, with its touches of Ravel and Prokofiev, slips on its spats and heads off to the city, where another fugue faintly hints at the composer’s identity. All in all the piece holds together well, and makes for a satisfying if slightly perplexing work; rather more so than, say, the similarly uncharacteristic string quartets of John Ireland.

Coming next, the substantial Toccata for Violin and Piano sounds startlingly harsh, the angular violin line and flurry of discordant piano notes recalling regions far east of the West Country water meadows, even when the mood eventually softens. ‘Bracing’ might be the word – rather more cold bath than Bath Spa.

In the 2 Pieces for Violin and Piano Bartok steps aside to make way once more for two seemingly folk (actually Medieval) based miniatures. They are alternately charming and playful – but I’d still never have guessed the composer.

Finally, from the first yearning bars of the Violin Sonata we are in identifiably Waltonian territory – specifically the languid Mediterranean Walton. Indeed, the echoes of the Violin Concerto are so striking that small wonder Christopher Palmer was tempted to orchestrate it to create in effect a second Concerto.

The form is unusual; an intense and ardent first movement, and a second comprising a rueful theme, seven mostly lyrical variations and a rather abrupt coda. I’m still not sure quite how, or if, it works, but the music is sufficiently seductive to make re-listening a positive pleasure.

Sarah-Jane Bradley has a fine track record in English music, so no surprise that her performance is spot-on; the same goes for her fellow performers, not least Annabel Thwaite in what might arguably be deemed the Toccata for Piano and Violin. Excellent sound, intelligent notes, and a bargain price – strongly recommended.