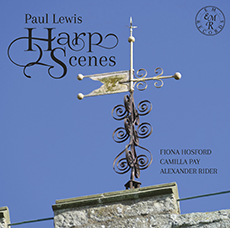 When you hear harp music do little pictures formulate in your mind, can I suggest a couple? Two young children one ‘a girl in flowing white attire, flowers in her hair, dancing in a woodland glade on a summer’s eve’. Or what about a new mother gazing at her new-born baby?

Are they a little too sugary for you?

Well, these are two images, which inspired the first track on this, the second disc of Paul Lewis’s harp music – Valse Nostalgique and the second track, a Lullaby. The composer is noted for his work in TV and radio and admits, in his very useful essay, to being inspired by visuals and ‘dramatic scenarios’.

For a composer, as I know from my own experience, writing for the harp can, with work, become a ‘knack’ and you probably learn it empirically. Paul Lewis’s advantage is that he owns up to knowing and working with every famous harpist you can think of. It’s also difficult not to compose tonally, as the tuning mechanism means that non-tonal writing requires constant pedal changes.

Usefully then, Lewis is a tonal composer and one who can effortlessly write tunes which charm and delight. And these three young harpists (pictured within) would clearly testify to the pleasure his music has given. For example the slightly jazzy Two for Fi, written for Fiona Hosford is, stylistically, something she especially enjoys. He calls them his ‘harp family’ and they are making their debut recordings.

The four movement Jane Austin Suite is a pastiche of the sort of Georgian music played by young ladies at the time, so it is full of simple memorable tunes. Not really a pastiche are the Four Anticke Dances but they do have renaissance titles such as Bassedanse, Sarabande and Pavan and each is given the name of a famous personality such as the earthy Master Kits’ Brawl (Kit Marlowe).

The remaining works are more personal. Lewis describes his Two Soliloquies as ‘love letters’ the first however consisting of a series of meandering sequences, the second more focused and elegant. Tintinnabulations was inspired by three sets of church bells. A nice idea, but I found each movement too long for its obviously repetitive material.

On the press release Lewis’s music is, quite rightly, described as a ‘luscious oeuvre’ and so if you want harp music that is idiomatic, tuneful and lyrical then this disc is for you but if you are looking for more profound harp writing of individuality and originality then my advice is to look elsewhere.