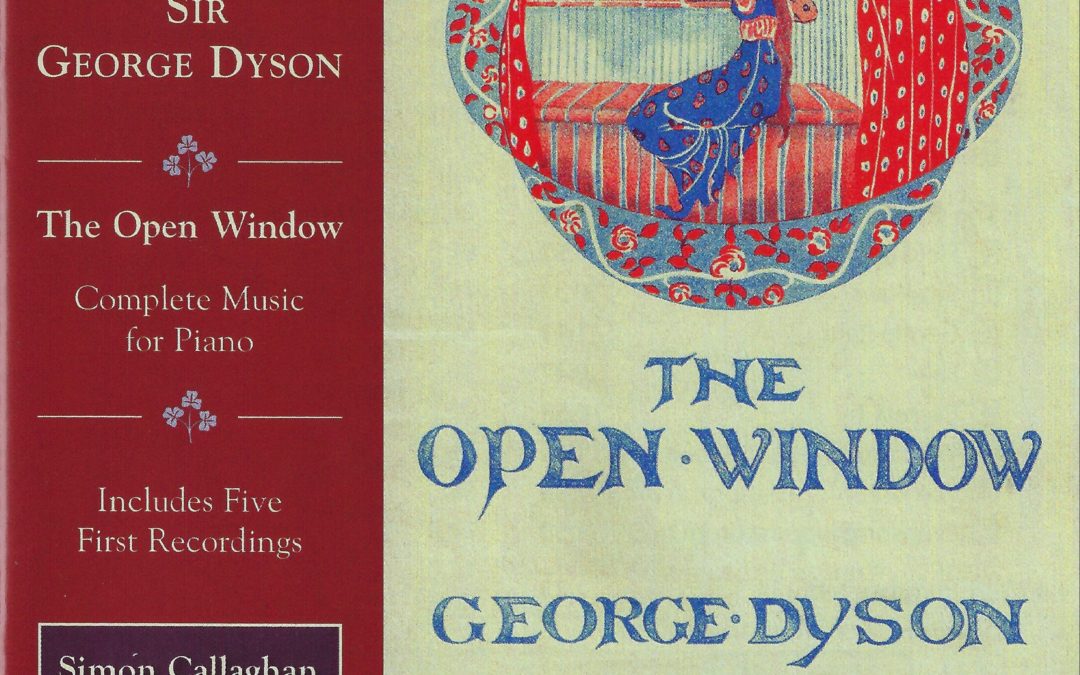 I have heard it said that Sir George Dyson’s church music is the musical equivalent of the Conservative party at prayer. It could be thought that some of this piano music, much of it written for young pianists was for nice, suburban middle class children to play on Sunday afternoons.

But that would be unfair, this is music composed in a more innocent era when life was utterly different and children-like titles which captured their day-to-day imagination.

Much of this double CD is, then, devoted to Dyson’s didactic music, some of it used by various exam boards over the years, like the Twelve Easy Pieces (1952) and The Open Window the front of which published score adorns the CD cover. It consists of eight little pieces with titles like Gentle Rain and The Patrol.

The disc has also stand-alone miniatures like Primrose Mount (1928) and Dyson’s first but untitled composition (1890). These are charming and delicate water colours and on a more challenging level the collection ends with Four Twilight Pieces.

This educational music dates from 1914 onwards the year he was appointed to teach at Rugby School. He soon left for war service however, and the Three Wartime Epigrams reflect his unsettling experiences. Later, back in teaching, now at Winchester College, he wrote Bach’s Birthday (1929)  a set of four fugues strictly conceived and, surprisingly, often using tone rows creating unusually angular phrases.

They were composed for Harold Samuel who was a great Bach exponent, but Dyson’s pupils must also have found them quite a curiosity. Dyson was from a northern working class family but became the first alumni to be Director of the RCM, unsurprising then that teaching through composing came naturally to him.

The “velvet-gloved” Simon Callaghan is joined by Cliodna Shanahan for the longest work in the set, the more serious and concentrated three movement Concerto Leggiero for two pianos. This is Dyson’s  arrangement of his own Piano Concerto (1951) and it is a lyrical but at times dramatic composition which works very convincingly for this combination.

Especially memorable is the (almost) impressionistic middle movement. Perhaps the mainly compound time first movement is a little less convincing, but the finale is often rhythmically striking and captivating.

The booklet notes are by Paul Spicer whose book on Dyson’s Life and Works is worth searching out. The recording lacks atmosphere but is perfectly adequate.