BRITTEN: A Ceremony of Carols 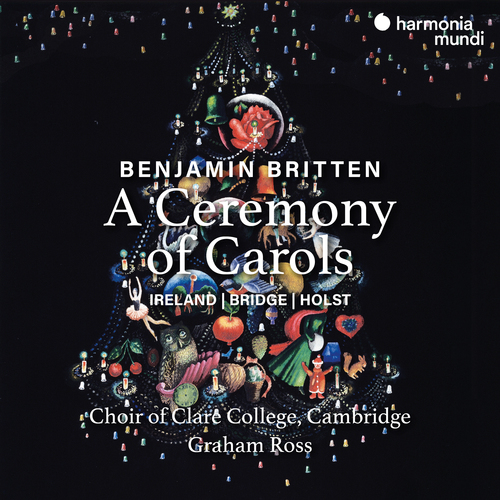 The glittering tinsel of a seasonal Clare College this year outshines its better-known neighbour, Kings, with a spectacular concert of music set to become the star of this year’s burgeoning collection of Christmas releases.

Britain’s Yuletide music tradition has in recent years been founded on Carols from Kings and its traditional Christmas Eve service. Now this enviable recording monopoly of Cambridge choral music seems to have been broken.

Since its founding in 1326,Clare College has built up a strong musical reputation and can boast notable choral music names like John Rutter among its alumni.

The cover work of this unmissable release is Britten’s famous cantata, A Ceremony of Carols, which features acoustics bound to carry listeners through a wave of blissful sound and take them right into that rarefied Church sanctuary.

An heavenly charm, is achieved by a supremely edited fusion of harp and choristers. There is a spiritual engagement here that remains steadfast throughout,  from the beckoning opening, Procession, and (10 fascinating movements later) to a neatly fading, valedictory, Recession.

Benjamin Britten composed this popular and timeless piece, for three-part treble choir and solo voices and harp, while traversing to America in 1942. It was destined to brighten Christmas skies for evermore.

The piece became an iridescent light amid all the worldwide doom and gloom at the time of the Second Word War. Maybe it’s a doubly appropriate release now as Christmas approaches and there’s distinct hope of an end to the devastating Covid worldwide stranglehold. Alleluia!

Hymns to St. Columbia, St Peter, and the Virgin Mary, give a more solemn side to some unimpeachable scoring for choir and organ.

The undoubted star of this show, A Ceremony and Carols, is also joined by a welcome mix of other erstwhile pieces from Britten and his compatriot composers. Holst, Bridge and Ireland.

An arresting version of the spirited Jubilate Deo and the joyous singing of that old favourite, The Holly and the Ivy (anon.), make significant contributions to this bargain release which gives almost 1 hour 15 minutes of enchanting sound.

A very Merry Christmas to one and all!