Songs for Sir John: A Tribute to Sir John Manduell 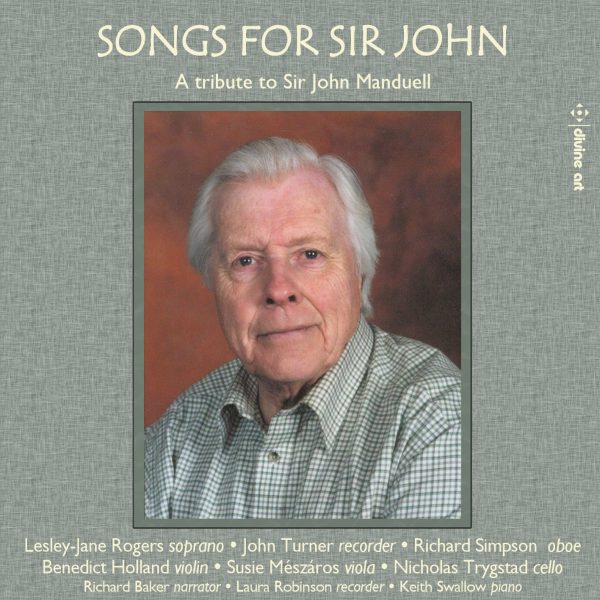 This collection of compositions by 15 living composers is perfectly described in an introduction by Paul Hindmarsh of the Royal Northern College of Music as a ‘Garland of tributes to Sir John Manduell (1928 – 2017).

Born in Johannesburg, Manduell went on to study at the University of Strasbourg, Jesus College Cambridge, and with Lennox Berkeley at the Royal Academy of Music. A founding principal of The Royal Northern College of Music from 1973 to 1996, he was a producer of music for the BBC and Programme Director of the Cheltenham Festival from 1969 – 1994.

A composer in his own right, he was a passionate supporter of other composers and performers. His photograph on the CD radiates encouragement, a word repeated so often by so many of the contributors.

Three movements for two recorders by Lennox Berkeley, assembled by his eldest son Michael Berkeley, are included. At least four of the other contributors were, like Manduell, pupils of Berkeley. Most are English and have connections with the Royal Northern College of Music. One, David Horne, is a Scot. Kevin Malone is originally from the USA while Naji Hakim, composer of a colourful final piece on the CD, is a Frenchman of Lebanese ancestry.

Most of the song arrangements, sung with sparkling clarity by Lesley-Jane Rogers, are settings of poems by W. B. Yeats, Manduell’s favourite poet, although one is by James Joyce. Richard Baker accompanied by Keith Swallow on piano and John Turner on recorder narrates four fun poems from a children’s anthology with music to tickle the imagination by Robin Walker.

Sally Beamish contributes an extensive instrumental interlude based on ‘The Wild Swans at Coole’, incandescently cinematic in its descriptive power.

The instrumental ensembles add much colour or atmosphere. They vary amazingly too. One has a touch of early music, another with folk music at its centre, for instance Jeremy Pike’s graphic The Cat and the Moon while David Matthews offers advanced romantic charm.