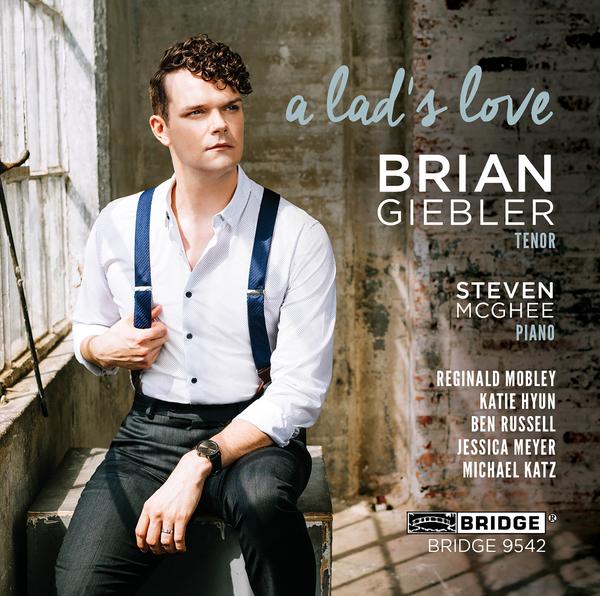 This is a disc of English songs with a strong bias towards settings of A.E. Housman.

The American tenor Brian Giebler tells us how he first met Housman’s poetry through singing Ivor Gurney’s Ludlow and Teme for his degree recital at the University of Michigan; it was always his wish to record the cycle and finally here it is.

The second theme running through the chosen music is that of love. We have father and son in a moving performance of Britten’s Abraham and Isaac for which Giebler and McGee are joined by the rich tones of counter-tenor Reginald Mobley.

Giebler explains further ‘the works on this album are therefore unified by the depth of feeling expressed by the lover, not the gender of the object of his affection’. Appropriately, for example, Britten, Auden, Quilter as well as Housman are represented.

The seven songs which constitute Gurney’s Ludlow and Teme are scored for voice and piano quintet and its good to hear Gurney’s In Flanders in a version for the same combination.

The disc’s title comes from Ireland’s short song Ladslove, the second song in his Housman cycle A Shropshire Lad. We also are offered the three songs from Ireland’s We’ll to the Woods no more of 1927, together with its moving piano postlude, Spring will not wait. (the CDs timings are incorrect here).

There are fleeting glimpses of Warlock with his little known In an Arbour Green with words from the sixteenth century by Robert Wever, and Quilter’s popular Love’s Philosophy a setting of Shelley.  Giebler closes the recital with a deeply moving song of Ian Venables Because I liked you better. The composer in his searches for lesser-known Housman found this wonderful poem in the poet’s posthumously published works.

Brian Giebler has a wonderfully lyrical and light tone quality. This can rise to considerable power when required and almost entirely clear diction, which is helpful as no texts are supplied; we are guided towards websites to find them.

Steven McGhee is sensitive and sympathetic throughout. Whilst it might be felt that Giebler does not fully respond to Britten’s early songs in the six pieces that make up Fish on the Unruffled Lake it would be also be correct to say that his understanding of Gurney is well worth the purchase of the disc, let alone the passion he conveys in the Venables and Ireland settings.