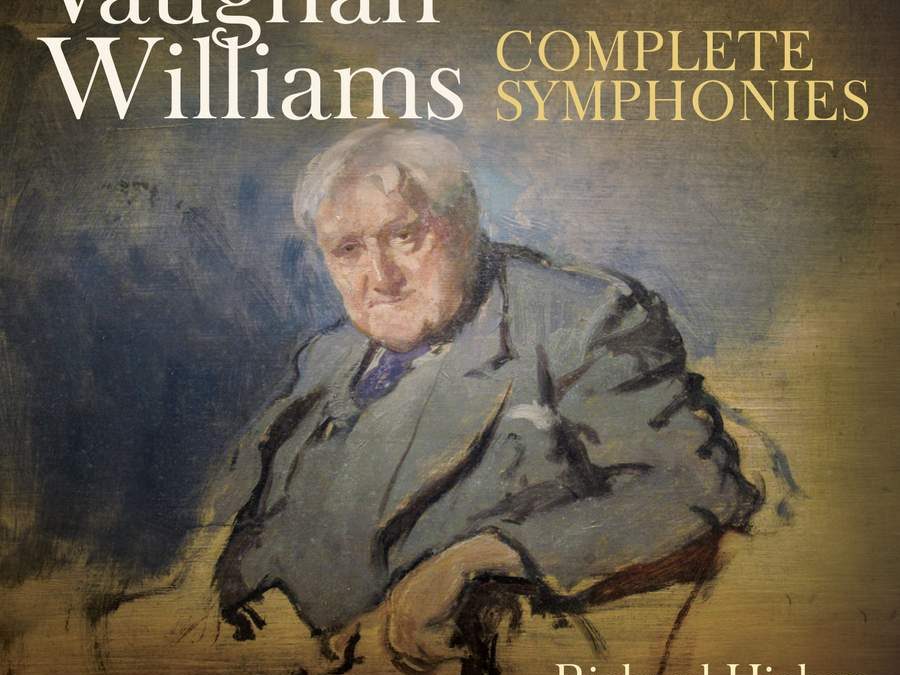 This issue is a super bargain, presumably an offering for the 150th anniversary of VW’s birth (of which you may have heard). It contains all nine symphonies (and some fill-up recorded interviews) for less than the cost of two full-price CDs.  The late-lamented Richard Hickox conducts all the symphonies except numbers 7 and 9, and mostly recorded with the excellent sound quality we have come to expect from Chandos.

It is quite an experience for a reviewer to hear this sequence in total over a single period of time, and the first thought is what an extraordinary variety is involved.  Each symphony is absolutely distinct, and the range of emotions is unprecedented.

However (!) like Noah stuck on the beach, the series gets off to an indifferent start.  The problem is that, for some reason, the Sea Symphony was recorded in the Barbican Hall.  Its wretched acoustics, close and cold, are not suitable for this massive ‘secular oratorio’, and the lack of organ in the first and last movements is regrettable (or, if they did wheel one in, I can’t hear it).  You only need to check out Martyn Brabbins’ recent CD to check the truth of these assertions (albeit available at full price, of course).

And Mr Hickox is not quite at his best here.  For instance, the impression of the gentle tug of the tide at the outset of the slow movement is not obvious, and the near 30-minute finale, in which the pianissimos are very soft indeed, is allowed to drag too much.  I suspect that this is because, it seems to me, that the slow tempi are just slightly slower than the markings, whereas taking the acceptable liberty of going slightly faster makes a considerable difference, especially in a dry acoustic. The chorus and soloists do very well, the former are particularly nimble and precise in the tricky scherzo.

The recording of No 2, the ‘London’ Symphony, is in a different class for several reasons.  Firstly, it is unique (so far) in that here we have the original 1914 version, about which VW had continual concerns with its length, making cuts for performances in 1920 and 1933 which ultimately totalled some 20 minutes of music.

The 1914 score was used for the preparation of the parts used for a one-off concert and this recording, for which permission was granted by the composer’s widow, Ursula, for this purpose only. However, after enquiry, I received the following most interesting information from John Francis, vice chair and treasurer of the RVW Society:

‘My understanding is that Ursula and Michael Kennedy were very strict about ‘just once’ at the time, but Ursula came to the concert and was enchanted by it. So, the embargo was lifted. I’ve checked with Hugh Cobbe of VWCT, who confirms that it is ok to play it, and parts are available on hire from Stainer & Bell’.

Along with the views of many VW’s contemporaries from so long ago, I would strongly support the notion that the cuts had gone too far – there are many new magical passages to enjoy, and the whole, to me, never sounds too long.

Richard Hickox is on great form in this rendition, being very committed and driven.  Space only allows me to mention one lovely moment – the final and most moving coda, with the darkened river gently burbling away – the perfect evocation of Humbert Wolfe’s epithet about ‘Night, acquainted with the long purples of the Thames’.

The performance of the Pastoral Symphony continues with excellent work from all concerned.  When I first encountered this piece, I could not understand the jibes about VW dozing in a Cotswold Field, chewing grass, watching cows at the gate, etc., etc., the symphony was about more than that, and now, as time has gone by, it is fully realised that it is indeed a secular requiem written against the background of the horrors of WW1 (in which VW served as an ambulance driver).  Understandably, like so many protagonists he was reluctant to speak about his experiences and would not discuss the nature of the music.

Now we know more about this, conductors have developed a much more sturdy and aggressive approach to the music which brings to light the strength of the emotions and passions involved.  How could earlier commentators miss the fact that the clear reference to the ‘Last Post’ in the slow movement is followed by an anguished climax, which is only outclassed by the response to the soprano’s wordless solo at the outset of the last movement?  Mr Hickox’s view of the music is utterly convincing and compelling.

I listened to nos.4,5 and 6 in one session and was suitably impressed.  VW denied that 4 foresaw the war, and 6 its aftermath, but no one believes that (he has form with this sort of issue) and even if he were sincere in this respect, listeners are still entitled to their views. 4 is, as expected, despatched with great energy and force, like Pappano’s performance reviewed a few months back, but in a more forgiving acoustic.  Here, no.6 is hugely successful, perhaps one of the best in the set.  In some renditions the textures can sound thick and overscored, but here everything gleams with perfect balance and sonic subtlety, and, as ever, those mysterious chords at the very end linger in the mind for a good while after the music finishes.

So, the lovely no 5 is the meat in this sandwich, ‘balm to the troubled soul’, in the midst of all this ‘Sturm und Drang’.  Hickox is fleet and delicate in the scherzo and beautifully rapt and hushed in the slow movement.  Some readers may be unfamiliar with the extraordinary story of the erroneous timpani entry at #10 in the slow movement where the copyist has the entry one bar late, creating harmonic havoc.  This was not rectified until Handley’s recording of 1967 (some forty-four years from the first performance!) and it is now correctly rendered.  It has been noted that even VW himself in three extant recordings did not notice (or did not let on he knew).

Here is the erroneous passage which can be found in IMSLP (under VW) on page 86 of an early version of the score:

Nos 1, 7 and 9 were not recorded in All Saints Tooting, and listening en bloc to the series serves to confirm that venue’s clear superiority as regards recording quality.  7 and 9 were done in the Grieghallen Bergen, and given that the conductor here, Sir Andrew Davis, in general adopts a noticeably cooler approach than Mr Hickox, these performances to me lack the impact of the others.

I view no 7 basically as a superb tone poem as well as a symphony and any performance needs a lot of colour. For instance, at that magnificent passage where we are confronted with the Ice Falls, the organ is recorded terrifyingly close. It is as though the listener is in the organ chamber itself.  This passage in quite overwhelming but not in a good way. Andrew Manze and the RLPO are the better choice with this work.

The famously enigmatic no 9 can be difficult to ‘get’, with its oblique references to Hardy’s Tess, but also most moving in its quotation of the ‘Solent’ motto which is exploited to extravagant effect in the Sea Symphony.  I found the performance to be dutiful rather than inspired.

No 8 appears on the final disc of the set, and can be viewed as a sort of Divertimento; thus, one should judge it by its own ambitions. An irreverent thought occurs to me that ‘would I be listening to this if it were not by VW?’  Mr Hickox here is appropriately affable and cool, and he does his best.  The rest of the disc is taken up by four lengthy broadcast interviews with VW himself, Barbara Hooper, Sir Adrian Boult, and the composer’s wife Ursula.  All these are of great historic interest.

Despite some reservations, this box can be strongly recommended, given that the recordings of 2 to 6 are amongst the very best available.  Here we have proof of VW’s enormous generosity of spirit, his exuberance and warmness of heart, and the nobility which still speaks with blazing clarity to all of us today.