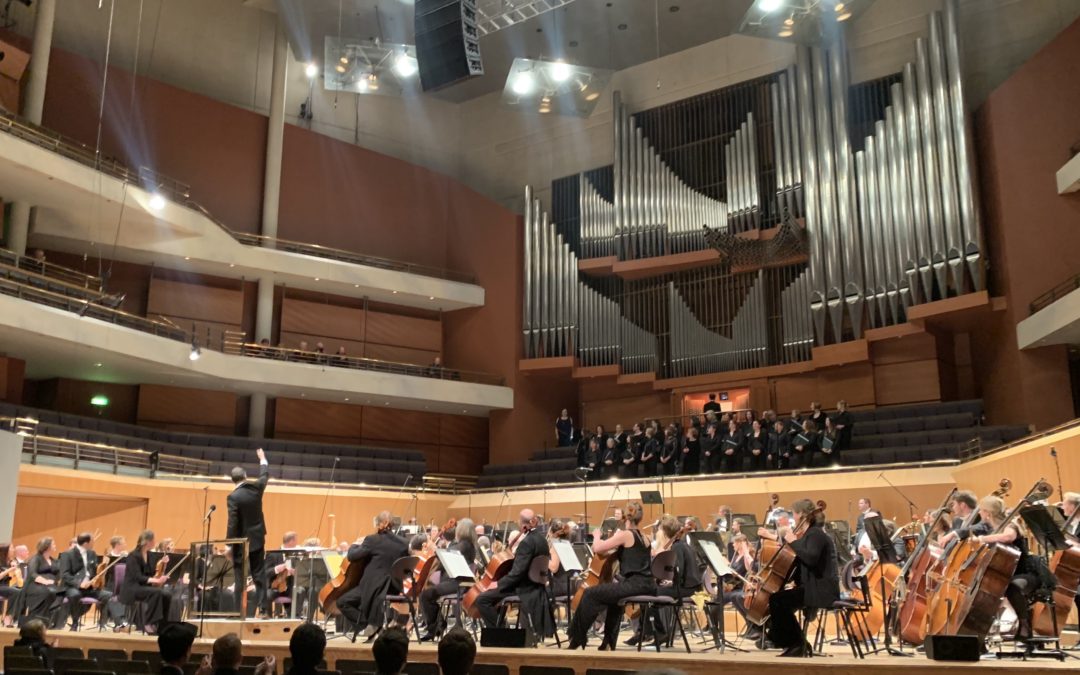 How appropriate that in Ralph Vaughan William’s 150th anniversary year this performance of his extraordinary Sinfonia Antartica should take place just a few streets away from Manchester’s former Free Trade Hall where it was premiered in 1953 (now the Radisson Hotel).

But the concert began with the unexpected addition of his stirring prelude to the film 49th Parallel which conductor John Wilson introduced as not only RVW’s first but also possibly his best film score dating from 1940.

The magical and otherworldly sound world of expansive landscapes with its wordless chorus and soprano solo prove that Sinfonia Antartica is indeed an astonishing piece. Interesting too that Antarctica was changed to Antartica at the last minute to ensure the two words used a consistently Italian spelling!

So is this program music? Does it paint a picture – or depict a scene? Well, yes and no. True, its origins were as a film score for Scott of the Antarctic, and I’m sure it’s possible to connect passages directly to the cinematic narrative. But this symphony has gone beyond those roots to create what RVW referred to as ‘absolute music’. Yet this music works on two levels: there is an undoubtedly human dimension yet always underpinned by a wonderful sense of forbidding vastness.

Wilson is undoubtedly an impressive conductor. The music of RVW can sometimes sound dated, pedestrian, even stodgy. But Wilson gave this music a freshness and immediacy which makes it feel all the more contemporary. His measured, precise and controlled gestures created, in the vast BBC Philharmonic, an immaculate sense of balance and coordination throughout the entire evening. If there was any doubt that our BBC licence fees are not value for money, occasions like this should leave us in no doubt.

RVW’s score is at times painstakingly slow. But this is all part of its magic, and it takes a great conductor to ensure that there is always an underlying sense of momentum and forward direction as we have in this performance. This allows the music to build to the terrifying climaxes such as with the entry of the demonic organ in the epilogue.

The ethereal voice of soprano soloist Sarah Fox floating behind the ladies of the Manchester Chamber Choir was superb in the outer movements. She could have benefitted from a subtle spotlight to illuminate her as she sang to give visual focus to this important role.

The Symphony No 2 A London Symphony was written when the composer was 41 and in the year before the outbreak of the first world war. For me this evocative piece came across as nostalgic and melancholic. The plaintive calls of the cor anglais and solo viola harking back to an age to which we can never return. How poignantly different this is from those composers who have inadvertently or deliberately written about Britain’s capital such as Haydn, Elgar, and Coates.

The Epilogue is inspired by the last chapter of a novel by HG Wells and contains the quote: The river passes – London passes – England passes. How prophetic for a symphony written on the eve of World War I which would see such an irrevocable change to London, Britain and the world forever.

The exquisite violin solo towards the end gives a tantalising hint of what was to come the following year with The Lark Ascending – one of his most enduringly successful works.

When you experience performances of this quality there is no doubt that this composer stands tall with other 20th-century symphonic masters such as Nielsen, Sibelius and Shostakovitch.

All too often we see an anniversary marked by the token inclusion of the work of a composer alongside some more popular classics. What is impressive here is to see not only the excellent pairing of two symphonies by one composer in one programme, but also to see this is part of an entire series focused on the music of this truly British composer.

You can listen to this concert on BBC Sounds – it was released on 12 Apr 2022 and is available for 16 days.