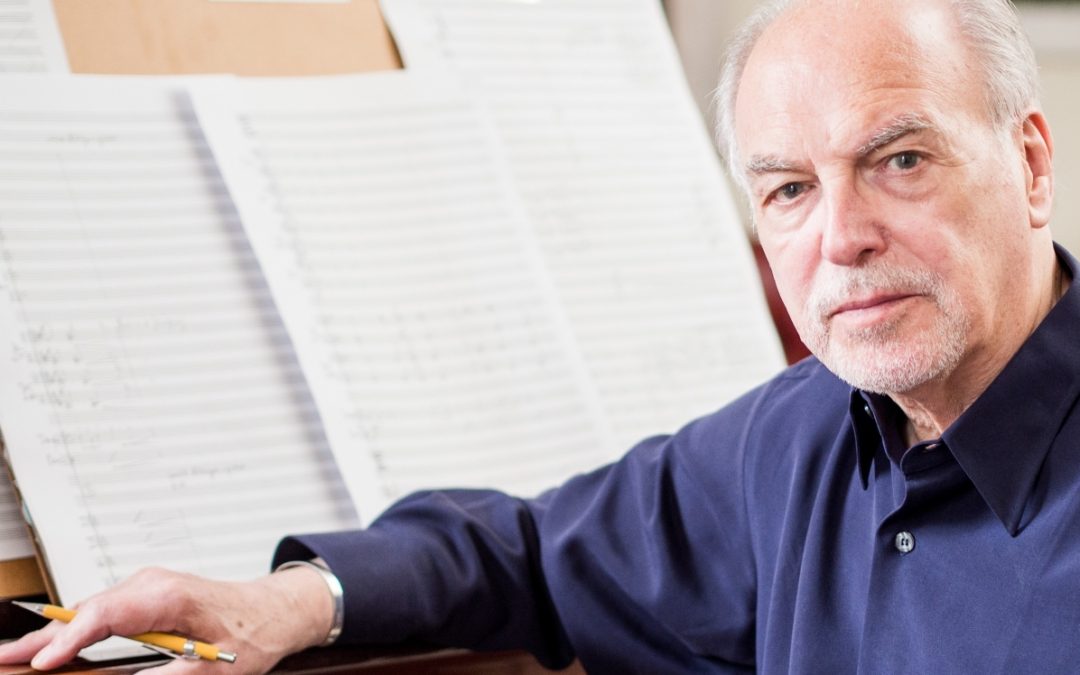 The death in Edinburgh on 24 March of the remarkable Scottish composer-conductor-clarinettist and educator John McLeod leaves an unfillable void in Scottish Music and marks the end of a truly remarkable career that touched and inspired the lives of so many.

His music is of international significance and has shown itself to be relevant, memorable, and highly communicative on a global scale. The oeuvre spans over six decades. Though there are works which have been withdrawn from public performance, the McLeod website currently lists over seventy works which range from full orchestral scores via choral and chamber pieces to songs, song cycles and works for solo instruments. There are outstanding works for percussion. There is a particularly large and significant collection of solo piano music, including five sonatas. The music for film has long been recognised.

The McLeod discography includes orchestral works on the Vienna Modern Masters Label, orchestral and chamber music (Delphian) as well as the complete solo piano music (Divine Art/Metier), piano music (Priory and Redbrook), guitar music (Nimbus), percussion works (RCA Victor), flute-piano music (ASV), and music for accordion (Meridian) and recorder (Olympia). There is a detailed overview of his complete oeuvre by Francis Morris in the Grove Dictionary of Music and Musicians.

McLeod’s work has been performed all over the world and has been championed by leading interpreters including Dame Evelyn Glennie, Jane Manning, Peter Donohoe, Benjamin Luxon, Sir Donald Runnicles, Sir Alexander Gibson, and many others. His work has been performed regularly by all the professional orchestras in Scotland and broadcast on BBC Radio Three. In 2016 John was appointed CBE in the Queen’s Birthday honours and in 2019 the University of Aberdeen conferred on him the honorary degree of Doctor of Music.

Born in Aberdeen on 8 March 1934, John’s career initially began after national service as a clarinettist at the Royal Academy, where his tutors included Jack Brymer, Reginald Kell and Gervase de Peyer. However, John was eager to make his mark in composition, and eventually entered the class of Sir Lennox Berkeley, who was a decisive influence. It was at the Royal Academy that John met his wife-to-be, the pianist Margaret Murray, to whom he was married for over sixty years. Margaret and John were a remarkable team – a most glamorous couple on the Scottish Music Scene who inspired audiences and listeners as much as students and pupils.

As an educator John held positions as director of music at Merchison Castle School in Edinburgh after teaching in Jamaica and Perthshire. Later he held lectureships at RSAMD, RAM and Napier University. As the Ida Carroll research fellow at RNCM in Manchester, he specialised in the works of Messiaen, Birtwistle and Boulez. John also ran an innovative, ground-breaking course in composing for television and film at the London College of Music (University of West London). This was in addition to his prolific work as an ABRSM examiner, and his extensive and distinguished career as a conductor. In addition to dozens of conventional orchestral concerts, many in Glasgow and Edinburgh, John was particularly associated with orchestral concerts for children. For over two decades John conducted schools concerts throughout Scotland with what was then called the ‘SNO’ (Scottish National Orchestra) introducing thousands of primary school pupils – including myself – to live orchestral performance for the first time. John’s conducting continued into the 21st century when performances included the direction on tour in 2014 of his Piano Concerto with soloist James Willshire and the National Youth Orchestra of Scotland.

As a composer McLeod was certainly sophisticated in terms of his phenomenal technique. His language was that of a thoroughbred 20th/21st Century artist. His approach was always highly practical, respectful of the performers…. and considerate for the listeners too. Though there is a vast variety of approach in his substantial oeuvre, there is always an emotional connection and passion. McLeod’s intensity of delivery is formidably impressive – as strong and enduring as Aberdonian granite.

For me, McLeod’s music is always written from a heroic aesthetic. Often there is a magisterial, monumental sweep to his utterances – even in miniatures such as the 12 Preludes or Three interludes for solo piano. We once shared thoughts about the Scottish character in a light-hearted exchange. John twinkled mischievously and talked about ‘anger and passion.’  I mentioned that though there was not much anger in his music, there was certainly an abundance of ‘romantic’ passion and, in that sense, it was quintessentially Scottish. I also suggested to him that he was Scotland’s Samuel Barber. Though initially John seemed surprised by this comparison, he did concede that he shared a love of lyricism and emotional intensity with the great American. Indeed, both McLeod and Barber often worked in neoclassical formats, finding intensity and romantic emotions within fixed structures.

McLeod’s orchestral scores impress not only with their formal conviction and inevitability of flow but, most significantly, via breath-taking colours, textures, and sonic vistas. This is immediately evident in The Gokstad Ship (1982), a work of remarkable formal craftsmanship which simply blazons with vibrancy, power, and quasi romantic passion whenever it is aired in the concert hall.  This is music that throbs with dynamism. It has the energy of an inextinguishable force. There are so many other wonderfully McLeod scores that could also be mentioned in this context, compositions that succeed in communicating with the wider music loving public as much as with contemporary music aficionados.

These include the 1979 Guinness Prize for composition winning symphonic song cycle Lieder der Jugend (Songs of Youth), the vast percussion-orchestra work, ‘Concerto for Evelyn’ written especially for Dame Evelyn Glennie and the National Youth Orchestra of Scotland in 1987, the Piano Concerto (premiered in 1988 by Peter Donohoe and the BBCSO) the viola concerto Nordic Fire (written for Jane Atkins and the Scottish Chamber Orchestra in 2018) and The Sun Dances, (2000) a beguilingly serene elegiac tone poem which was given its London premiere by the BBC Scottish Symphony Orchestra under the baton of Donald Runnicles  in 2014.  Perhaps the earthy directness of many a McLeod score brings a sense of association with Nordic composers. Certainly, we should not overlook the Scandinavian architectural influences and similarities evident in McLeod’s native city of Aberdeen, nor the fact that McLeod himself said that he was influenced by the music of Nielsen, Sibelius and Nørgård.

Of course, the main influences on John McLeod came jointly from his Royal Academy Professor Sir Lennox Berkeley and, later, from the great Polish composer Witold Lutoslawski. McLeod always expressed both gratitude and admiration for both composers. He was well aware of their key place in the development of his voice, style, and technique as a composer. McLeod also learnt significantly from studying the music of Dmitri Shostakovich. In 1974 his orchestral score The Shostakovich Connection led not only to tremendous successes throughout Scotland and beyond, but also to a much-valued correspondence with Shostakovich himself.

John was a deeply inspiring energised dynamically creative individual devoted to Margaret, who sadly passed away last year. Margaret’s support of John’s remarkable  compositional development cannot be over-estimated. In addition to constantly offering advice and encouragement, her devoted work included much copying and typesetting. Margaret also made an effective and sensitive transcription for clarinet and piano duo of the piano interludes from ‘Another Time, Another Place.’

Away from music John was passionately interested in literature, travel, and theatre. He was a talented writer of fiction and latterly was working on a series of memorable, often touching, and humorous short stories. John McLeod is survived by brother Ronnie, (himself a professional musician of distinction), his daughter Elspeth, son Andy and grandchildren Joel, Alba, Klara, and Bruno.