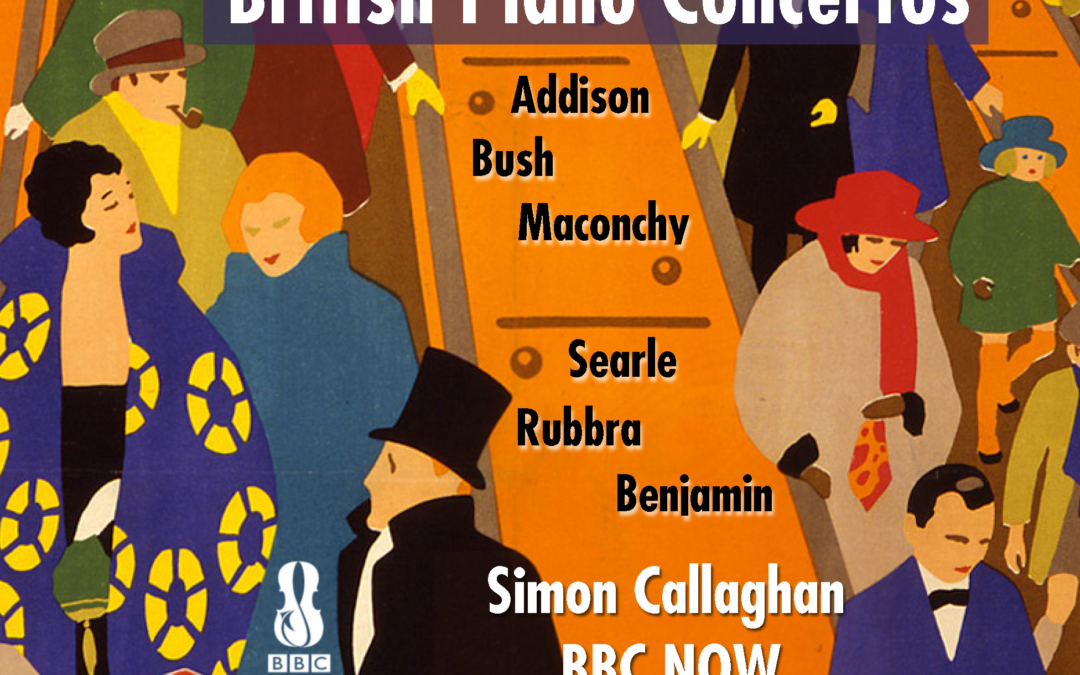 This latest welcome issue from Lyrita features six ‘piano concertos’ of which four are first recordings, which in itself is commendation enough, especially as Simon Callaghan and his orchestral support are well-known to be exemplary performers.

The general tenor throughout most of the disc can be described, oxymoronically perhaps, as ‘light’ music with dissonance.

First up is John Addison’s Wellington Suite written for the eponymous college in 1959.  This was a slight disappointment, appearing to be self-consciously flippant, and eager to please (which it did not, in my case).

Arthur Benjamin’s Concertino (1927) is more interesting with elements of a neo-classical atmosphere suffused with jazz idioms.  It does not, for me, leave a distinct memory trace though the ‘Presto Scherzando’ section does hold the ear.

We are led into a different of achievement with the next 2 items.  Firstly, there is Elizabeth Maconchy’s Concertino for piano and strings (1949) where compositional grip and skill are fully evident, the music inhabiting common ground with say, that of Alan Rawsthorne.

Then there is Humphrey Searle’s Concertante for piano percussion and strings (1954) which is based on serial techniques.  Here we have the brevity of Webern (4’ 10”) with the tonal inferences of Searle’s hero, Berg.  We are told this was written after a request for ‘a serial, but straightforward piece to be played by students’. When it was taken up by the RCM Searle remarked that ‘it was probably the first time that twelve-note music resounded within those hallowed halls’. It does not sound particularly easy to say the least, but this maybe the result of compositional skill.  The music certainly has considerable weight.

Rubbra’s Nature’s Song a ‘tone poem’ is scored for ‘orchestra, organ and pianoforte’ and dates from 1920 when the composer was just 19.  There are echoes here of the composer’s teacher Holst who also conducted the first performance. It is said to be based on a poem Nature’s Call also by the composer, here printed in the liner notes, but, frankly, I could not relate what I was reading with what I was hearing.  I also could not detect the sound of the organ in the recording which is either due to misjudgements in the scoring, or the recording, or maybe it was decided not to use the instrument, (or finally, because it escaped my attention).

Lastly, there is Geoffrey Bush’s A Little Concerto on themes of Thomas Arne for piano and strings, wherein some of Arne’s gracious little keyboard pieces are arranged idiomatically for the forces specified.  This is a very pleasant conclusion to this valuable disc – a sort of palette-cleansing sorbet if you like.