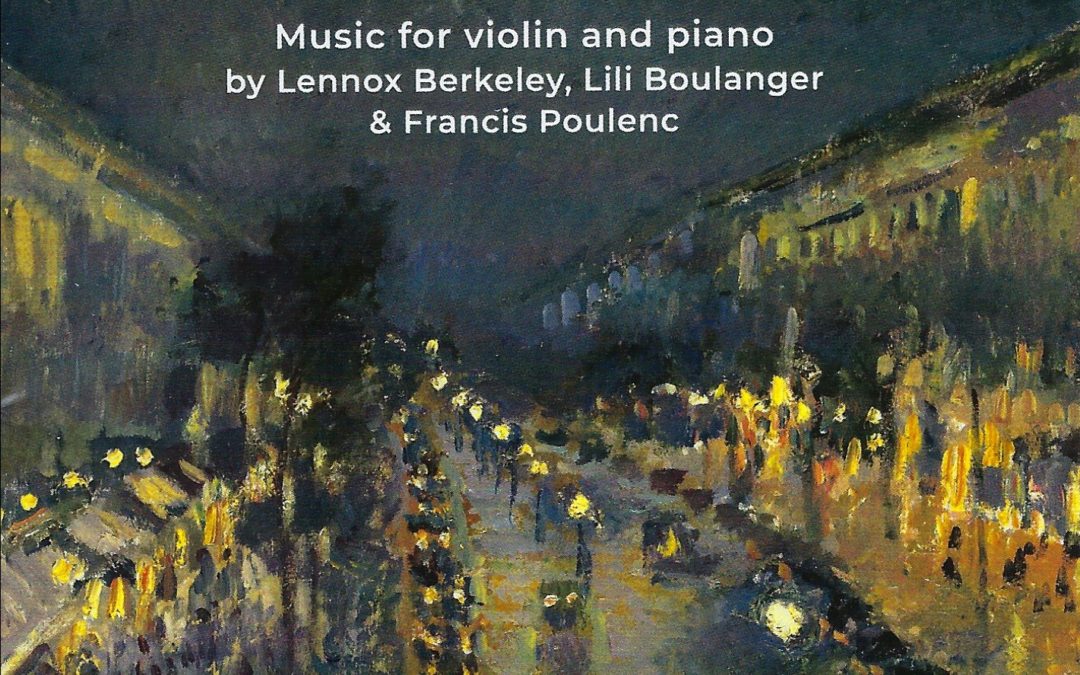 The booklet cover displays a wonderful Parisian street, I think the Champs-Élysées, by Pissarro which really conjures up the lights and gaiety of the world which Lennox Berkeley entered in the late 1920s from his more claustrophobic upbringing near Oxford. His studies with Nadia Boulanger proved to be decisive.

He met everyone of importance and other composers studying with her, Copland, even Elliot Carter for example.

It’s curious that nothing of Nadia’s is included on this disc, however we do have three works by her enormously talented sister Lili, which are D’un matin de printemps, better known in its orchestral guise, Nocturne and a quite lively Cortège, with perhaps more of a feeling of a pony and trap than the usual funereal tempo.

The Violin Sonata No 1 was written whilst Berkeley was studying in Paris in 1931. Here, we meet music of drive and jazzy rhythms in the outer movements, and even a tango in the central section of the middle movement Adagio. There is not much evidence of Berkeley’s famed ‘Gallic charm’, which is generally said that he quickly absorbed. It’s the longest work on the disc. Perhaps the finale needed to be given a little more ‘con brio’ to add to the suggested Allegro. The three movement ‘Sonatina for Violin and Piano’ of ten year’s later is much more elegant but lacks the strong, distinctive character of the Sonata. It does though end with an attractive set of variations.

By 1950 Berkeley’s style was settled and stylish as demonstrated in the sophisticated miniatures entitled Elegy and Toccata both beautifully conceived for the violin.

The last works on the disc are all by Poulenc. The Sonata for Violin and Piano was composed at more or less the same time as Berkeley’s Sonatina. Emanuel Bach. The  helpful booklet essay describes it as ‘tragic’, and it is an angry outcry against the Spanish Civil war, despite its many tender moments. The finale is actually marked Presto tragico. It is certainly much less ‘Gallic’ than the Berkeley Sonatina.

The CD ends with arrangements by Heifetz, no less, of three of Poulenc’s piano pieces, two of his Mouvements perpétuels and his Presto in Bb – an excellent finale.

The performances are of the highest quality and are impressive throughout. I must add however that I don’t think that the acoustic of the Southampton University Concert Hall does the music many favours.