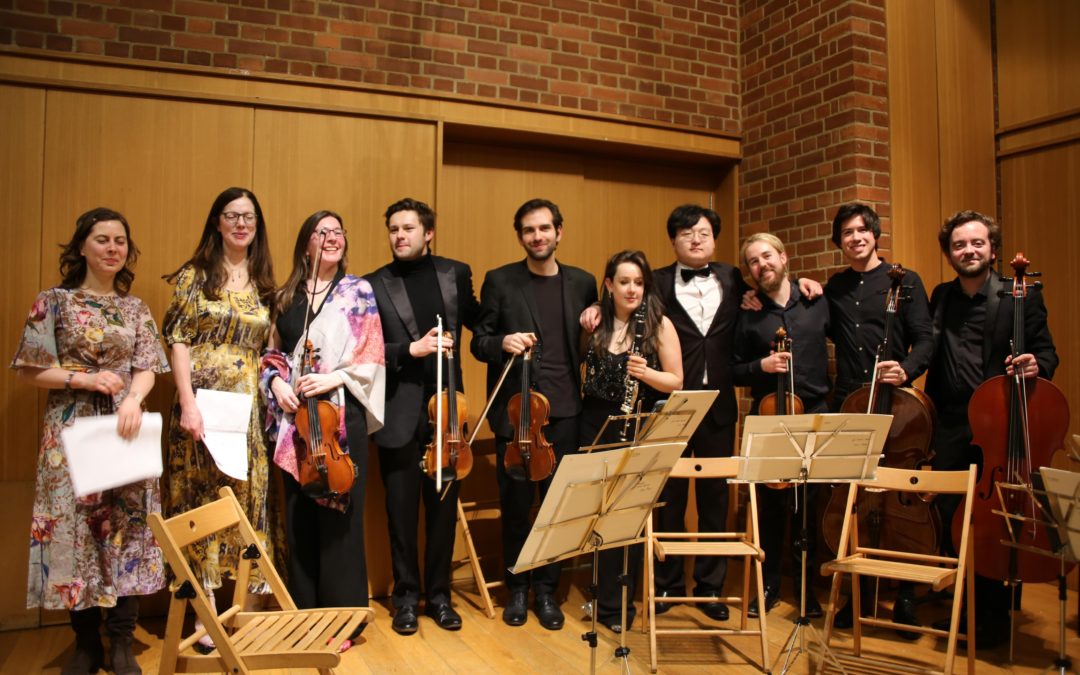 William Blezard was a pianist, composer and musical director to Joyce Grenfell and Marlene Dietrich, and was married to the pioneering female conductor and musicianship teacher Joan Kemp Potter (1920-2001); they were parents to Pookie and Paul. William died in 2003 but the centenary of his birth was 10th March 2021; with lockdown restrictions in place at that time, a later date was chosen for this concert, which just fell within his centenary year.

William’s daughter Pookie still lives and works in the same house in Barnes in which she and Paul grew up. All of Blezard’s manuscripts have been carefully preserved there, together with his catalogue – a red Silvine memo book with handwritten entries! All the string pieces were performed from the manuscript parts, each with their own beautiful handwritten script. The programme for the concert was a mix of his own compositions plus a couple of carefully selected pieces by composers who would have had an influence on his own writing.

As a musician, Blezard’s career was very varied, working in film, theatre and television, whilst at the same time writing for large orchestras and chamber ensembles. A selection of his chamber music was performed at this centenary concert, a cross-section of his work, to give a delicious introduction to his wide-ranging compositions.

The concert began and ended with pieces for strings (Aleem Kandour and Lucy Melvin – violin; Erik Fauss – viola; Garwyn Linnell and Kieran Carter – cello); commencing with The Thames at Barnes, an atmospheric pair of pieces subtitled, At Night, and In The Morning. This is where, as a film composer, his ability to capture an emotion or a scene perfectly within the music, was so evident. The morning mist rising from the river could almost be felt, and the gentle lulling of the water on a calm evening. In contrast, the Serenade which ended the concert, displayed his love for more jazzy rhythms and complex syncopation. This is a piece for string quintet in four short movements, each one contrasting in character, but united in their freedom of rhythm and tempo.

Blezard also wrote extensively for wind instruments, including many pieces for clarinet. Clarinettist Poppy Beddoe chose to play Three Cabaret Pieces and Scherzo Furioso, accompanied by Deven Cui on the piano, who then played his personal choice of two works for solo piano: Day Dreaming and Nocturne. Again, each piece beautifully descriptive and varying in character.

Added to this well-balanced programme of music were works by two other composers: Webern’s Langsamer Satz, (Aleem Kandour, Grig Cuciuc – violin; Erik Fauss – viola; Garwyn Linnell – cello) with its rich Viennese harmonies, reminiscent of Blezard’s own Serenade, and an arrangement by Paul Harvey of three Gershwin songs, (a composer much loved by Blezard), for solo clarinet, played by Poppy Beddoe.

The concert was hosted by Orsi Torják’s Music Around the Park, whose musical events for audiences of all ages, are becoming a high spot on the musical calendar in Barnes.  Pookie Blezard introduced the music, chatted about her father and how the concert had all come together. She also read out some recollections contributed by Steve Pearce (as Steve was stuck in France) which illustrated not just William’s skill as a pianist, but also his humanity and loyal friendship. Pearce was Blezard’s long-time collaborator and performer of his clarinet repertoire.

The performance ended with an encore of Mancini’s Moon River, played by all the strings, as a link to Blezard’s professional work with film music, and his personal love of life by the River Thames, which so much influenced his own writing. Provided with the lyrics, the audience all joined in and sang joyfully.