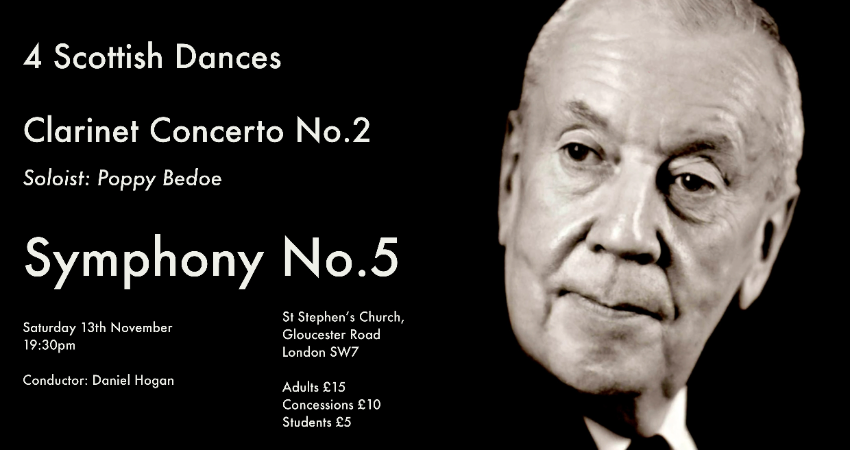 While not a single one of the major London orchestras has programmed a note of Sir Malcolm Arnold’s music in this his centenary year, it has fallen to the BBC and smaller groups to celebrate his much-loved music. This concert put together by the young conductor Daniel Hogan demonstrated why this music needs to be heard live.

Not just for the sheer sound of the orchestra, but for the smiles on the faces of the players. The music of few composers elicits so many smiles from players. These are not just smiles at the often good humour, but, at the sheer pleasure of hearing the sounds their colleagues are making. So, it was in the splendid surroundings of St Stephen’s Church that we were able to see these young, some seemed very young, players thoroughly enjoying themselves.

To begin on a slightly negative note, the orchestra was lacking in numbers of lower strings, so we went from violas to cellos to only one double bass. Strangely this did not cause too many balance problems in the first two works, but in the 5th Symphony there is much taxing writing for the lower instruments and a larger group was missed. That said, the solo player (there were no programmes so I cannot identify her) did a magnificent job performing the often taxing parts alone.

They opened in brilliant fashion with the Four Scottish Dances first performed in 1957. They are justifiably popular, with Arnold providing perfect snapshots of various styles of Scots music. The opening Strathspey was taken quite quickly so that the triple tonguing section for trombones was doubly, or triply, thrilling. The comic bassoon solo in no 2 was not overplayed for laughs, and in the Air, there was much gorgeous playing from the solo flute and oboe. The final reel could have been faster, but it was still great fun.

Poppy Beddoe who is making something of a name for herself as a clarinetist of note, was the extrovert soloist, in an eye-catchingly appropriate dress, in the Clarinet Concerto No.2. Although commissioned by Benny Goodman in 1969, it was not completed until 1974, one of only two works he completed that year. Scored for a chamber orchestra, with many challenging passages for solo players, it is an emotionally multi-layered work from the depths of despair to outrageous high jinks.

Miss Beddoe cannot be asked to play the work often but to her credit she played it from memory. The first movement, both dramatic and lyrical was beautifully shaped, and the cadenza which Arnold expects the soloist to improvise ‘as jazzy and way out as you please’ was of her own design. I’ve always been worried by his instruction but thankfully there was nothing too ‘way out’ here, rather it acted as a second development section and introduction to the later movements.

The slow movement is one of Arnold’s great elegies and Mr. Hogan drew some really soul-stirring sounds from the players, the dissonant interplay between soloist and orchestra beautifully teased out. The finale is the infamous pre-Goodman Rag; I say ‘infamous’ because it caused a stir when first performed and continues to do so.

Many of Arnold’s peers thought it tasteless in the extreme and it is not what one expects at the end of a concerto. Paying homage to a 20s style of jazz, part Berlin, part Sousa, and utilising the dance band music from Arnold’s 1969 film score The Reckoning, it is a straightforward old fashioned unpretentious rag. It has always been popular with audiences and here, as is often the case, it was encored.

The concert ended with the 5th Symphony, a very difficult work for even professional orchestras to bring off, but which these young players more than did justice. Again, there are difficult solo passages, but the real problem is, in each movement, joining together what can seem to be fragmentary material. Excoriated at its première it has in this century become the most played of the Arnold symphonies. The solo horn, clarinet and tuba solos, all memorializing friends who died young, were played as well as by the BBCSO at the Proms in the summer.

Is it sentiment or sentimentality in the slow movement? Arnold told us he could not decide, and Mr. Hogan erred on the side of caution, not ‘milking’ the exquisite ‘big’ tune, and holding back on the horror in the central section. The scherzo with its awkward cross rhythms was kept in check, but perhaps at the loss of some excitement. The militaristic finale was tightly controlled, and, surprisingly, the lack of lower strings made the closing bars even more poignant with just a handful of instruments holding the last low E.

Mr. Hogan clearly has a wonderful ear for balance and phrasing, and his energetic style of conducting was clearly much appreciated by the orchestra. These are tough works to bring off so well, and with what I understand was minimal rehearsal time. No one has replaced the late Richard Hickox as a champion of British music but on this showing, perhaps in a few years, Mr. Hogan may take his place.