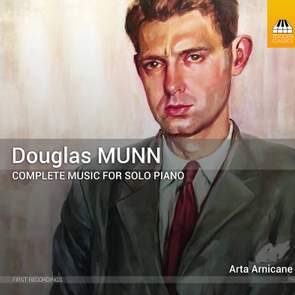 This is an extraordinary disc of music by an extraordinary personality.  Douglas Munn (1929-2008) was a distinguished mathematician, famous in his field, successively professor at Stirling and Glasgow Universities, but also a highly proficient pianist and, in his youth, a significant composer.

Most of the music here was composed in his mid to late teens, but revised in the 80s.  It must immediately be said that the confidence and strength of purpose in this music utterly belies his youth.

His idiom was derived from Chopin with a modicum of Brahmsian heft, but expressed in the style of mid-20th century. broadly tonal music.  I suggest it is reminiscent of some of the music of his contemporary, Ronald Stevenson, and, even, of the slightly older Ronald Center.

For me the most impressive works included here are the Scherzo in F sharp minor and the Sonatina in F minor where the writing is more dissonant and advanced.  An unusual feature of the Sonatina is that he only completed the finale in 1985.  It is in these pieces that the Scot in Douglas is detectable.

The subtle reek of a distant peat fire comes and goes in some highly poetic moments, while the finale of the sonatina sounds like a ceilidh fiddler, mad with energy (and with most of a bottle of the local hooch inside him).

There are three Preludes in the programme which are also very impressive indeed, the second two being only discovered after his death.  The first has a most winning lyricism, the second is magnificently complex with shoals of notes that could only have been written by someone familiar with Rachmaninoff.  The third evolves into something like a Celtic ‘Jeux d’Eaux’.

There are five Nocturnes in this collection.  These are a little more easy-going, but still highly attractive.  A whimsical 5/8 Intermezzo in A minor entertains and assures us that brevity is indeed ‘the soul of wit’.

The booklet notes are comprehensive.  Douglas’s sister writes the biography (NB Scotland had four universities of medieval establishment, not three, and five if you count Aberdeen’s as two rather than one).  David Easdown contributes a long essay on Douglas’s mathematics, which serves to confirm that exponents thereof live in a world that only they understand.

Finally, Arta Arnicane comments with insight into the music.  She became a close friend of Douglas and his wife Clare, and this disc is the outcome of a promise to record all Douglas’s music.

Her performances and Toccata’s recording are beyond reproach. It is good to note that the music has been typeset and, it is hoped, will be published shortly.