An appreciation of Honor Sheppard 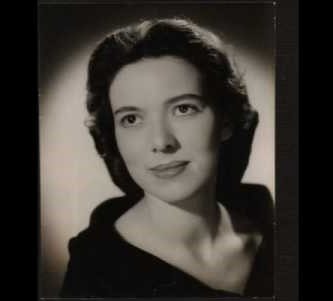 The distinguished soprano Honor Sheppard died in her home village of Bowdon, Cheshire, at the age of 89 on 29th May 2021.

She was born on 23rd December 1931, one of two children, in Horsforth, near Leeds, but she was very proud of her Cornish heritage via her mother’s family.

Honor’s first marriage was to the baritone John Lawrenson, but after that marriage broke down she married as her second husband the harpsichordist Robert Elliott, who had been a fellow student at the Royal Manchester College of Music, where her adored singing teacher was Elsie Thurston.

When Robert subsequently became Head of Keyboard Studies at the Royal Northern College of Music, this necessitated a move from their home in York to the leafy suburb of Bowdon, near Altrincham, where they bought one of several local houses which had strong musical connections.

The Firs, their adored home for the remainder of their lives, had been the home of the conductor Hans Richter. Nearby houses had been occupied by Adolph Brodsky (the distinguished Russian violinist and Principal of the RMCM), the composer John Ireland, and also the composer and artist Thomas Pitfield (Robert’s composition professor at the RMCM and subsequently with his Russian born wife Alice close friends).

Honor was “discovered” by the conductor Maurice Miles, at whose instigation she went to the Royal Manchester College of Music, and she quickly started to build an international solo career, with a voice of startling beauty, keen musical intelligence, and a winning personality.

She shone in such works as Howells’ Hymnus Paradisi, Tippett’s A Child of Our Time, and Havergal Brian’s Gothic Symphony, where she took part in the first professional performance with the BBCSO under Boult in the Royal Albert Hall in 1966.

Honor was however particularly renowned for her performances of baroque music, with Purcell and Handel being particular favourites. She joined the world-famous Deller Consort in 1960, as first soprano, and with Alfred and Mark Deller, and such stalwarts as Maurice Bevan, Robert Spencer on the lute, and her husband Robert Elliott on the harpsichord they toured the world with immaculate performances of madrigals and baroque music, as well as thrilling audiences each summer in Boughton Aluph Church, Kent, at the renowned Stour Music Festival.

To quote Mark Deller: “Not only was her voice liquid gold……she was unsurpassed as THE oratorio/passion soprano soloist of her day….but she was also stunningly beautiful, and like everyone else, I adored her.”

In retirement she continued to teach at the RNCM. Her many pupils, both at the RNCM and before, included fellow Yorkist Lynne Dawson, Tessa Bonner, and Sasha Johnson Manning (the composer of the Manchester Carols) who said: “Our lessons were magical and full of laughter.

Honor’s wisdom, beauty and fabulous wit, combined with her magnitude of musicianship and one of the most beautiful voices I ever heard, made her an exceptional star to be guided by.” Honor treasured and frequently performed a setting of “A Willow Bird”, written for her by Robert, who had himself been a composition pupil of both Pitfield and (in Paris) Pierre Max Dubois.

I was first introduced to Honor by my lutenist friend Robert Spencer, and we collaborated on premieres of memorable works by Alwyn, Leighton, McCabe, Fricker, Petr Eben, Douglas Steele and Pitfield (her near neighbour in Bowdon).

For a celebration of her 80th birthday in 2012, in a packed Wilmslow Church, Howard Skempton continued the tradition with a setting of “Winter my Secret” for soprano (Lynne Dawson), recorder, harpsichord and cello. Acis and Galatea was also on the menu, with a roster of well-known singers. It was a memorable occasion, with an audience just as emotional as all the performers. Honor is quite unforgettable.

She is survived by her Daughter Helen (“Fen”), her son Dominic and her four grand-children, Michael, Henry, Connor and Elizabeth.

A tribute by John Turner