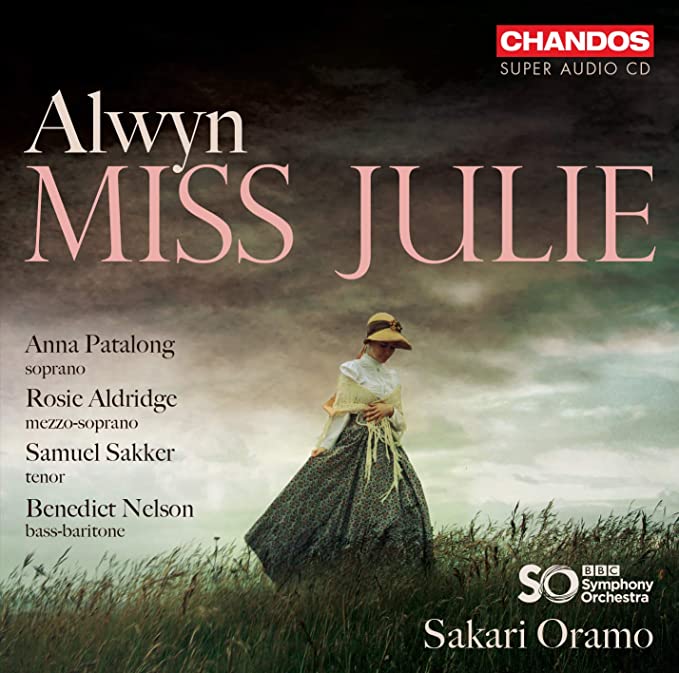 In his middle years William Alwyn (1905-1985) was moving away from his extensive interests in music for film towards a more symphonic musical language. For Alwyn this was a logical step. ‘Film music’, he wrote, is ‘essentially dramatic music’.

The composer was greatly attracted to Swedish dramatist, August Strindberg’s tragic tale of Miss Julie, who is presented as a member of doomed aristocracy battling against an aggressive servant class. The musico-dramatic language is Alwyn at his most assured with more than a passing reference to the verismo works of Puccini and Mascagni.

Not surprisingly Alwyn underlines the Strindbergian symbolism. As the writer Rodney Milnes points out ‘virtually every sentence the characters utter is only about a quarter of what they mean’.

Andrew Palmer’s programme note reminds us that Alwyn ‘set an intimate chamber-like drama featuring a cast of four and one set’. The music, though, has a real romantic sweep combined with not a little subtlety. Palmer points out that waltz rhythm permeates the opera as a whole – initially carefree but, like Ravel’s La Valse, becoming progressively more distorted as the characters become more absorbed in their nightmare.

The opera is set in the late 19th century on Midsummer Night in the kitchen of a Swedish country house, the owner of which is the Count. The staff and servants are celebrating midsummer led by Jean, the count’s valet. He has already taken up with the Count’s daughter – the eponymous Miss Julie.

The valet is taunted by Miss Julie and eventually, they embrace, incidentally jilting Kristen, the cook. Jean and Miss Julie spend the night together after planning to escape to Italy. Julie is now half crazed while Jean now suggests that suicide might be the only way out. Miss Julie picks up a razor and walks out of the kitchen.

All in all, musically and dramatically this is a fascinating recording, excellently performed and produced. The soprano Anna Patalong has the full measure of the demanding role of Miss Julie, scaling the high tessitura with little difficulty. Benedict Nelson makes a suitably sleazy Jean.

Of particular note is the conducting of Sakari Oramo – which is excellently paced and balanced. Alwyn’s always colourful orchestral writing is impressively realised. This recording is well worth acquiring, giving Britten’s better-known (but not inferior) works a run for their money.