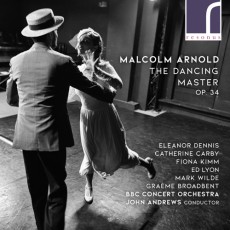 A BBC rejection of Malcolm Arnold’s only opera still leaves indelible scars after 60 years. It was one of many disappointments (both personal and professional) to befall the prolific composer who is now widely acknowledged as a master in all British classical music.

This new recording of his one-act opera, The Dancing Master, is a laudable attempt to give the rushed 75-minute work a renewed lease of life. It was originally proposed for television broadcast (composed in a mere two weeks!) but never really meets the level of excellence now so adored in other Arnold works. Even a flimsy storyline, built on that perpetual ‘boy-meets-girl’ plot, fails to grip the imagination.

Despite the consummate vocals and committed orchestral playing under the studied baton of John Andrews, the musical miracle of ‘silk purse from a sow’s ear’ never really comes off.

This is an early work from Malcolm Arnold’s extensive repertoire and there are distinct flashes of the genius that was to emerge so distinctively in subsequent years. Nine brilliant symphonies and the famous series of totally engaging orchestral dance suites were among eminent works that brought Arnold’s wide-ranging composing talent to the world.

The overwhelming case for more Malcolm Arnold pieces to grace both concert halls and recording studios deservedly and relentlessly goes on. Alas, this latest release seems to add little to a very worthy cause.

There can be no doubt, however, that the highly polished instrumentalists, and six soloists on this recording give heart-and-soul commitment to what, sadly, is a basically flawed piece. Despite this, Ed Lyon(tenor), Graeme Broadbent (baritone), Catherine Carby (mezzo-soprano) and Eleanor Dennis (soprano) make particularly note-worthy contributions

Could it be that The Dancing Master was hurriedly composed in a forlorn attempt to break into the up-and-coming 50’s pioneering television world? Were politics the driving force rather than the pure talent of musical inspiration?

One thing for sure: this torrid argument will deservedly rage on.