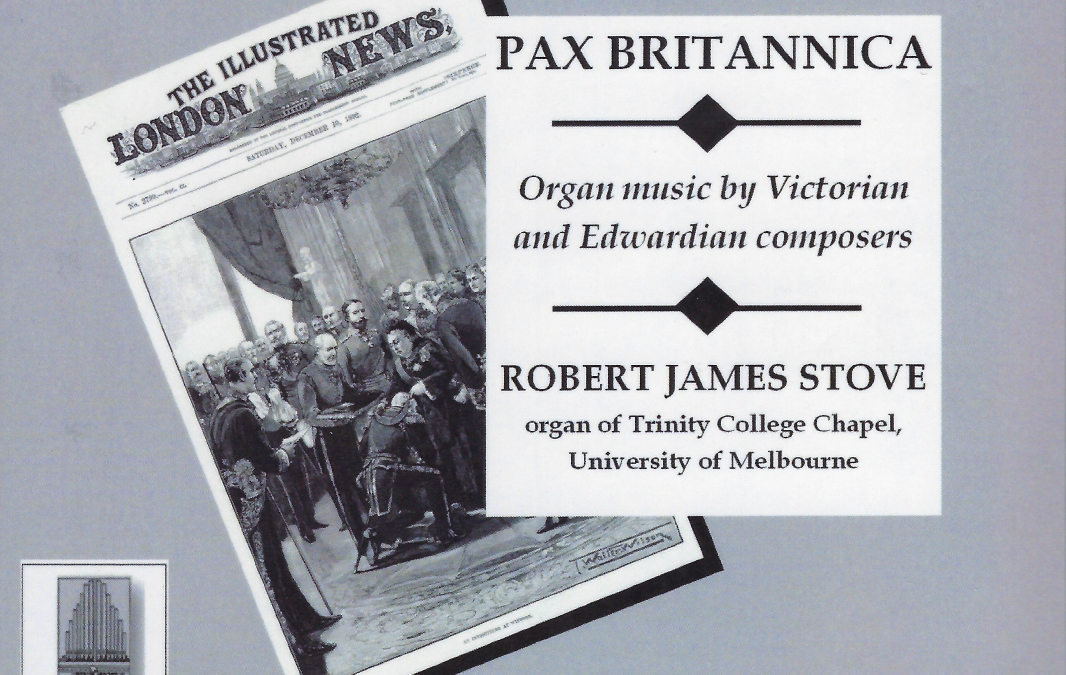 Music by Victorian and Edwardian composers

This is a uniquely interesting recording from Australia. It brings together, in one place, organ compositions by many late nineteenth and early twentieth century composers. Some are largely forgotten while others might pop up only singly as curiosities in a contemporary organ recital.

There are 18 pieces in all, some by well-known names like Elgar, Stanford or Ethel Smyth. Others like Coleridge-Taylor, Parry and Stainer are by composers known today for only a few pieces. A significant number of the composers I was only just aware of, like Sterndale Bennett and Alexander Mackenzie. Some others I had not heard of, yet some of their pieces were more interesting than  pieces by better-known composers.

The CD recital opens with God Bless the Prince of Wales by Brinley Richards in a rousing arrangement for organ by our performer Robert James Stove.

The first word of the CD title, PAX, is of course Latin for ‘peace’ and indeed many of the works are decidedly peaceful and gentle. They are often hymn-like, leaning strongly towards harmony rather than counterpoint.

The Andante con moto Op. 101 No. 6 by Stanford, one of the best and most attractive pieces, is an imaginative variation based on an old Irish hymn tune, St. Columba (The King of Love my Shepherd is).

Many of the pieces seem to be intended for Church ‘business’, for instance William Wolstenholme’s Communion or Burial by Alexander Mackenzie.

Only a few I would regard as concert pieces, the three movement Sonata in g minor by Charles John Grey, Allegro con spirito by Alfred Rawlings and just perhaps the Chorale Prelude by Ethel Smyth.

Coleridge-Taylor’s Melody in D and Meditation in a Village Churchyard by Charles William Pearce reminded me of what in piano music of the time were sold as ‘Tone Pictures’.

The final piece on the CD is Christmas Postlude by William Thomas Best, well placed since it reminded me of those French pieces described as ‘Sorties’.