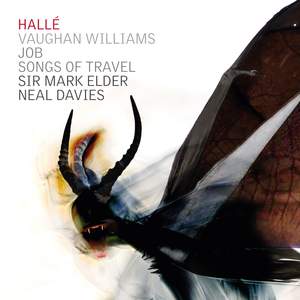 Job the dancing masque is beguiling. It brightly glows like a musical rainbow and would light up the most pedestrian of concert halls. It bursts with mesmerising melodies conjured from dazzling harmonies. Here Ralph Vaughan Williams fervently reveals why one of his most communicative works is reverently worshipped by all.

That potent Elder-Hallé combination unashamedly revels in this musical extravaganza – once described by one of classical music’s esteemed critics, Michael Kennedy, as “one of Vaughan Williams’ mightiest achievements.” And on hearing this gratifying interpretation listeners will certainly agree.

Whilst Job does not boast the sheer weight and complexities found in RVWs momentous symphonic literature, it does leave an impassioned mark. The ‘masque’ (an historic Tudor term preferred to ‘ballet’ at the insistence of the composer) might not totally substantiate Kennedy’s words, but there is an undeniably emphatic, raw appeal in this music.

Sir Mark heartily capitalises on the  graphically animated biblical tale. It is vividly captured in this recording by capitalizing on the clever use of blazing brass, sweeping strings, and charmingly intricate woodwind phrases.  That unique Vaughan Williams sound is here easy to identify in a magnificent idiosyncratic work.

Admirably committed Hallé players respond to their leader’s unbridled bravado with a great enthusiasm, emphasising the traditional panache this orchestra has always shown for offerings from RVW. Barbirolli would have been proud.

That distinctive broad-sweeping main theme – vintage Vaughan Williams – majestically flows out with real goose-pimply resound – never mind the neighbours, let this permeate through your home at full blast. This biblical story from the Book of Job has inspired some unforgettable writing from the pen of a genius who, according to his second wife, Ursula, was an atheist.

The wonderfully entertaining Songs of Travel tread a less adventurous road but the faultless balance between an attentive Sir Mark and the crisp-delivery of baritone,  Neal Davies, make this nine-movement collection a very worthy partner.

The final song: I Have Trod the Upward and the Downward Slope makes a perfect finale to a veritable hypnotic journey. This release will prove worth the investment, even for the most avid of RVW collectors.